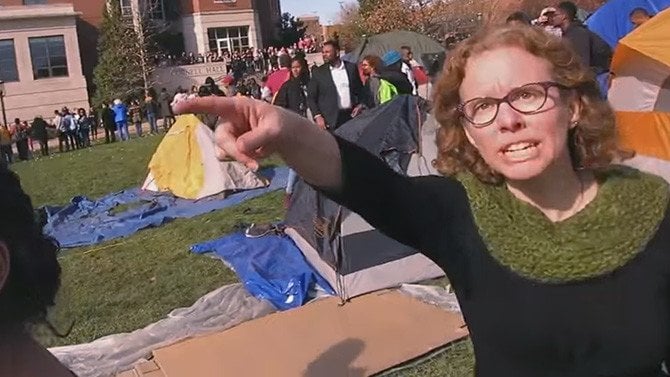 One would think that with a surname like “Click”, a person might be more sympathetic toward photographers, especially when that person is also Assistant Professor of Mass Media at the University of Missouri.

Some of you will remember the story from November last year, of Dr. Melissa Click’s tussle with journalists attempting to interview and photograph students during a protest on the campus.

If you need a bit of a reminder, here’s the original video that was posted to YouTube.

The video shows photojournalist Tim Tai, on assignment from ESPN, attempting to capture the protests and being confronted by students.

Recording this video was fellow photographer and University of Missouri student, Mark Schierbecker, who had his camera grabbed by Click, shortly before she called out for “Muscle” to assist in removing him.

After an investigation by the University of Missouri Board of Curators, they voted 4-2 in favour of firing Click, and she was let go on Wednesday.  The board had previously voted to suspend Click with pay on January 27th.

A statement was prepared by the Board and presented by Board Chairwoman, Pam Henrickson

The board respects Dr. Click’s right to express her views and does not base this decision on her support for students engaged in protest or their views, however, Dr. Click was not entitled to interfere with the rights of others, to confront members of law enforcement or to encourage potential physical intimidation against a student.

– Pam Henrickson, University of Missouri Board of Curators Chairwoman

The statement also cited other events involving Click’s behaviour, when she yelled profanities at police officers attempting to move protesters at a Homecoming parade in October.

Henrickson went on to further say that “[Dr. Click] has the right to appeal her termination”, and that “the board went to significant lengths to ensure fairness and due process”.

Statement from the videographer assaulted by Melissa Click #MelissaClick https://t.co/YrckWM2Jft

In it, he explains that he is happy with the outcome, although disappointed with Click’s denial that her actions represent a pattern that that has apparently been going on for some time.

What do you think?  Do you believe that dismissal was too harsh?  I mean, she apologized.  That makes everything all better, right? (there might be a hint of sarcasm in that last bit).

Hopefully, being that it happened on a University campus, a place for learning, the students in the original video have also learned something; That rights don’t just apply to them, they apply to everybody.