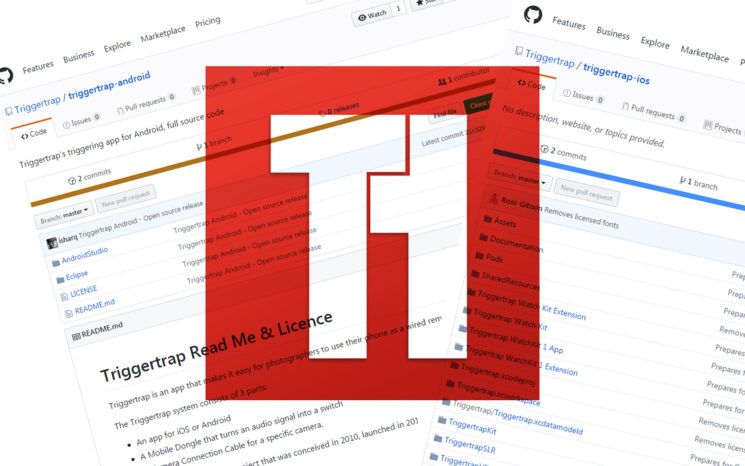 When it was announced that Triggertrap would be winding down its business, many users expressed concern. What would happen to the apps? Will they be updated? Or will the hardware they’ve bought and paid for suddenly become useless? The common suggestion was to make it open source.

A couple of weeks ago we reported that the Triggertrap Mobile dongle had indeed been made open source hardware. Now, they’ve followed along with the software. The Triggertrap apps for both iOS and Android have now been released. They’re completely open source and available on Github (iOS / Android).

I spoke with Triggertrap Founder Haje Jan Kamps to get a little clarification on the release of the code, and how it would affect users. After all, for most of us, simply compiling the code and putting it on our phone isn’t an option. And what happens if an update to iOS breaks it?

Haje says that the general idea is to ensure that the apps continue to live on as they are. The iOS version of the code is being maintained by former Triggertrap CTO, Ross Gibson on a volunteer basis. As of yet, nobody has been found who’s willing to take on responsibility for the Android version.

There are no plans to do any further official developments to the app at the moment. Of course, iOS11 is on its way. So, if this, or future versions of iOS do happen to break the code, they do aim to try and keep things up and running. Community code contributions toward this end are very welcome. The same is true of Android once somebody has been found to take on that role.

Developers are also free to fork the project and continue development on their own. It is requested, though, that developers not use the name “Triggertrap” in their apps, preferring the term “Compatible with Triggertrap”. Not an unreasonable request. It will prevent a lot of confusion amongst Triggertrap users.

With both the Triggertrap Mobile hardware and software now open source, it will be interesting to see the direction it may take in the future. Will the code simply maintain the status quo, merely ensuring that the app continues to work through various Apple upgrades? Or will we see the developer community come together to take things further?

Only time will tell, but I’m hoping for the latter. For now, if you want to check out the code for yourself, you can do so at these links.

You can read the official announcement over at Medium.