It was one of those moments when two articles collided in my day and struck a chord. The first was JP Danko’s here, on whether or not it’s ethical to use photos of your children for stock. The second was by Lucy Dunn, on The Pool, where she raises the question of ‘over-sharenting’. (Sharenting, for anyone who hasn’t yet encountered this hideous portmanteau, is the tendency to share your parenting experiences on social media, from potty-training successes to supermarket meltdowns.) In particular, Dunn is concerned about how little guidance exists for parents who are navigating the social media seas themselves. 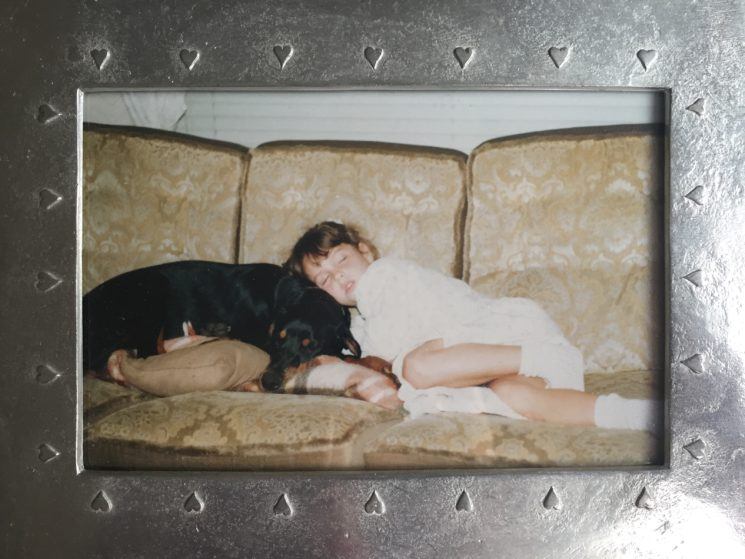 Me and our dog Silke, c. 1988. A print in a frame from the days well before Twitter, I got to choose to share this.

Lots of advice, but is it relevant?

If you want advice on how to teach your children to be safe on Snapchat, handle Facebook bullying the right way, and not make Instagram mistakes, it’s widely available. But what about the implications of your social media use? What sort of digital footprint are you creating for your child when you post photos of them, share their exploits, and moan about their behaviour? Your children don’t have any control over this output, but it concerns them and ultimately, will have an impact on their lives. And there’s practically nothing out there suggesting what is and isn’t acceptable, or what you need to consider. I know; I went and looked for it yesterday.

It’s as if any group or organisation which advises on parenting hasn’t yet figured out that parents use social media themselves; it’s not a techno-bubble limited to teenagers.

When people do talk about it, the primary concern seems to be that images of children are going to be misappropriated by paedophiles and used to create horrific abusive content. According to Australian research, over half of all images on paedophile websites are stolen from social media platforms. This is no small worry. But it isn’t the only issue, and it feels as if the other concerns aren’t being addressed appropriately.

This isn’t just about protecting children from faceless paedophiles or even from potential kidnappers who’ve figured out their schools, swimming clubs, and cricket practice times. This about giving children the necessary privacy to grow, make mistakes but recover from them, and figure out who they are and want to be in security. What you share about them now has implications for the people they’ll become. I’ve seen it referred to again and again: children deserve and require a degree of privacy. It’s critical to their development as individuals and their confidence in themselves.

It seems terribly abstract–and almost inconsequential, because everyone else is doing it–but we’re yet to reap the whirlwind, so perhaps exercising some caution is best?

Social media is a parenting positive

For plenty of people who are raising children without the immediate support of their own families, social media can be something of a life-saver. It allows you to seek advice on nappy rash and sleepless nights, express anxiety about starting school, or question what is and isn’t acceptable behaviour for teenagers. There are people out there who’ve been through it all before and can make suggestions or lend you a friendly ear. And for some people keeping a blog that itemises and details the mundanity, hilarity, and absurdity of life with children can be cathartic for them and enjoyable for others. It’s not all bad. Far from it.

But in the mental maelstrom of the sentiments these two articles stirred-up, one keeps swirling back to me: how much is too much?’

How much is too much?

That, really, is what all of this comes back to. The general consensus on Danko’s article was that provided he isn’t asking his kids to do anything that might endanger them or makes them feel uncomfortable, he’s probably doing just fine. If his children turn round and say ‘We really don’t want to do this anymore,’ then it would be time to reconsider. But when it comes to recording your children’s lives on a public platform, how much is too much?

I did manage to find one piece of helpful advice on the website of the National Crime Agency. (Who would think to look there? Surely a parenting organisation–one with oodles of information designed to terrify parents about the dangers of their children sexting–would be a better venue?) It suggests the following:

Living in the real world

I spoke to my cousin about this. She has two children and she also has a Facebook account. For her, Facebook is important to be able to share the children’s progress and achievements with family who are scattered across the globe, but she does take precautions. Her privacy settings are closely guarded. She never shares photos of the children in any state of undress. She’s cautious not to show their school uniforms’ logos, too. Most of the anecdotes I hear about the children are shared over the phone or in person. We get to hear them, but they’re not set in digital stone.

Another of my friends, with two pre-school-aged children told me that she is cautious and selective about what she shares, but that ‘I struggle with this every day.’

Is a fleeting moment of amusement or exasperation on your part really worth a legacy of cringing embarrassment, or worse, for them? Have you considered that you might be damaging your relationship with your children if they don’t feel that they can share things with you because you, in turn, will share it with the rest of the world?

Travelling with a light footprint

The Ultimate Guide To Managing Batteries On Location