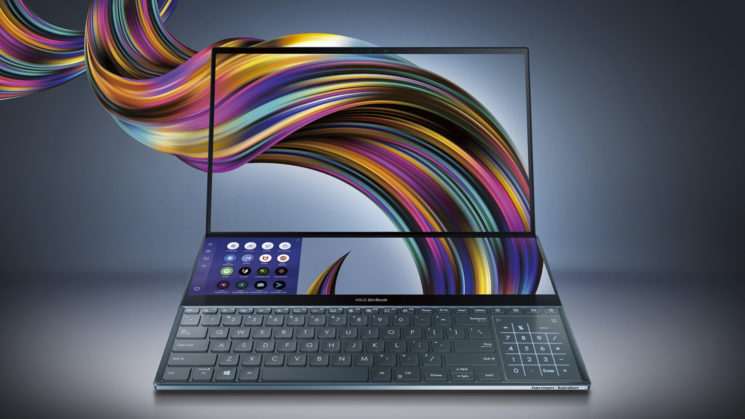 ASUS is going all out on mobile content creation lately. After their recent announcement of the very creator-focused ZenFone 6, they have today followed it up by announcing the ASUS ZenBook Pro Duo. The latest model in their ZenBook Pro lineup, boasts a pair of 4K displays, an i9 processor, up to 32GB RAM and an Nvidia RTX2060 GPU.

While it does technically have two 4K displays, one is the more traditional 16:9 we’ve come to expect, the other, is a 32:9 display offering 3840×1100 resolution. They’re calling this the ScreenPad Plus – an evolution of the ScreenPad introduced on the 2018 model ZenBook Pro.

Here, though, the screen doesn’t double up as a touchpad, as it did with the original ScreenPad. Here, the touchpad sits off to the right of the keyboard, doubling up as a numeric keypad.

The main screen is a 15.6″ 4K OLED touchscreen display with 178° angle of view, a 5mm thin bezel with an 89% screen-to-body ratio and 100% DCI-P3 colour gamut. The secondary screen, the ScreenPad Plus, is a 14″ 3840×1100 touchscreen IPS display, also offering 178° angle of view. In front of the second screen are the keyboard and numeric pad (which is also the trackpad). 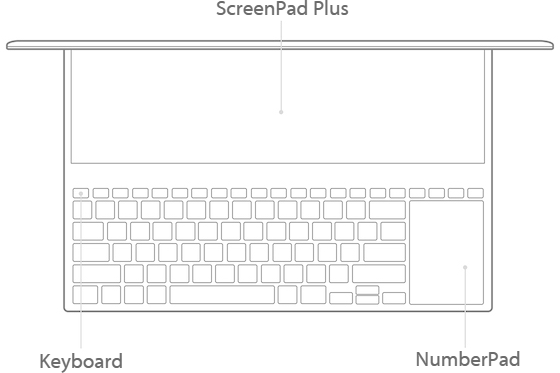 When it comes to connectivity, you’ve got a full sized HDMI output socket for an external display, you’ve got a Thunderbolt 3 Type-C USB socket as well as two USB 3.2 Gen 2 USB sockets and a 3.5mm audio combo jack.

It’s a very cool design for photographers and video editors who want to maximise space on their main screen. With this, you can throw your timeline or thumbnail previews down on the bottom at full width while seeing your image larger up top. It would also let retouchers see a full view of the image on the main screen with a zoomed in section to work on in the bottom. And to help with retouching, ASUS is including the ASUS Pen along with a Discrete palm rest with the ZenBook Pro Duo. 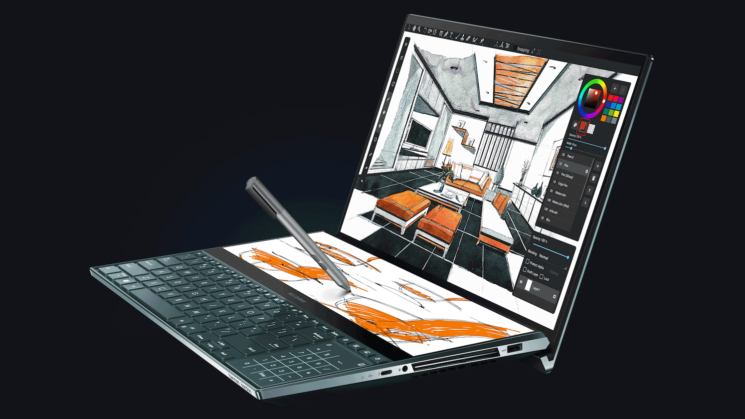 As well as the 15.6″ ZenBook Pro Duo, a smaller 14″ ZenBook Duo will also be coming. It’s essentially the same design, only smaller, the displays are Full HD rather than 4K UHD, and there won’t be a Core i9 option. The GPU has also been pretty massively downgraded in the 14″ version to a 2GB MX250. Obviously, the two laptops will be aimed at two very different markets.

No exact pricing or availability information has been released on either the ZenBook Pro Duo nor the ZenBook Duo yet, but they’re expected to come at some point during Q3 2019.

This one feels like ASUS is actually designing for creators. Giving us some useful innovation to help our workflow, not just giving us the hardware specs we need.

Hooking Your Laptop With A Retina Display For $55