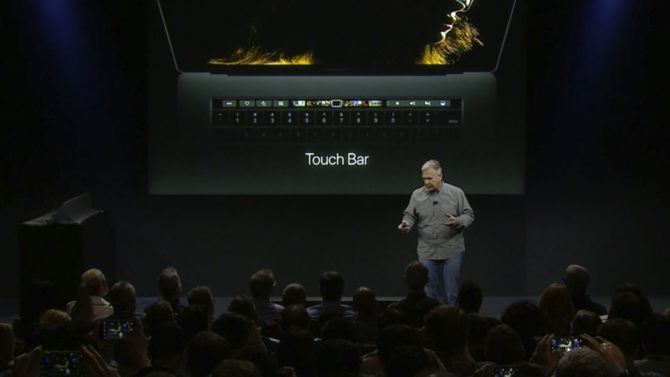 Hot on the heels of Microsoft’s new Surface Studio, Apple have announced the new MacBook Pro. What is their thinnest and lightest unit ever, the new MacBook Pro features a brand new “Retina-quality Multi-Touch Display” called the Touch Bar. Essentially it’s a secondary interactive display to complement whatever app you happen to be running.

The Touch Bar may sound like a bit of a gimmick at first, but I really don’t think it is. It’s akin to having a second monitor that just relays important or useful information about your current app. Except, this one’s touchscreen, so more than a simple visual reference. Being able to put valuable interactive feedback and tools from each of your applications onto a secondary display is a big deal for productivity.

Available in 13″ or 15″ sizes, the new 13″ MacBook Pro comes in at 14.9mm thick and weighs only 3lbs (1.36kg). The 15″ version is 15.5mm thick and they’ve shaved half a pound in weight off this one, too, bringing it to 4lbs (1.81kg). The previous generation were already impressively thin and light, so this extra saving is very impressive.

The displays on the new MacBook Pro are 67% brighter and have a wider colour gamut yet retaining the same resolution as the older models. What drives those displays depends on which model you go for. The 13″ MacBook Pro uses Intel’s Iris Graphics 550 integrated GPU. The base RAM on the 13″ model is 8GB, upgradable to 16GB. The 15″ MacBook Pro comes with 16GB of RAM and the graphics are powered by the new AMD Radeon Pro 450 or 455 with 2GB DDR5 memory.

Unfortunately, 16GB is your limit, with either model. If you need more, you’re just plain out of luck. This may not be a problem for the majority, but for the power users that Apple hopes to attract (more on this later) this could become a big issue. Depending on which size of MacBook Pro you go for, you’ll get either a dual core 2.9Ghz i5 for the 13″ with Touch Bar (2.0Ghz for the one without) or a quad core sixth generation 2.7Ghz Core i7 Processor (Skylake).

The array of variously sized and shaped sockets have all disappeared. Thunderbolt, USB, HDMI, DisplayPort, VGA, etc. have all been replaced by new Thunderbolt 3 powered USB-C ports. These will do everything from charge your MacBook Pro to driving external displays and storage. The 13″ model has two, while the 15″ model has four.

This is where the power user issue comes in. Along with the new MacBook Pro Apple also announced a partnership with LG electronics. LG are to launch new ultra high resolution 5K displays. A pair of external monitors running 5120×2880 resolution is a beautiful thing, but with only 2GB for graphics and 16GB system RAM on the most powerful MacBook Pro, is it going to have the juice to really utilise it?

The shift to offering solely USB-C ports also presents other issues for Apple based users. If you want to hook up your shiny new iPhone 7 Plus or iPad Pro to your MacBook, you’ll have to invest in new cables at $35 each. Although, I suppose cost has never really been much of a concern for most Apple users.

Amusing aside. After several accusations (really?) accusing Microsoft of unoriginal thinking on the part of the recent Surface Studio announcement, at least one person spotted how closely Apple’s announcement video resembled Microsoft’s.

So, What do you think? A worthy update to replace the old 2012 models? Or a little underwhelming? Is the lack of memory options beyond 16GB a problem for you? Will it prevent you from buying one? How about that Touch Bar? Is it enough to keep you sticking with the MacBook Pro? Or are you considering making a switch to the dark side with a Surface Studio & Surface Pro 4? Let us know in the comments.

Hooking Your Laptop With A Retina Display For $55