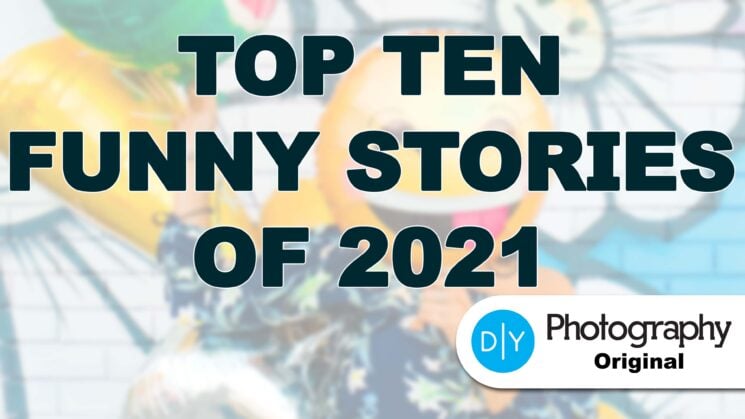 If you’re anything like us at DIYP, you use humor to live through tough times and make them more bearable. Just like the infamous 2020, the year of 2021 was also one of the weirdest and toughest in our lives. But thankfully, we still have our humor. And despite a tough year, we found time to laugh, joke, and of course – write stories that entertain us and you.

As we’re wrapping up 2021, ye wanted to remind you (and ourselves) of some of the funniest stories we reported about over the course of this year. We bring you our choice of top ten stories and hope to put a smile on your face today!

El Risitas’s famous 2007 interview is one of my favorite memes. There have been many iterations of this interview, “subtitled” to suit all kinds of people and situations. And earlier this year, someone finally made a version for photographers. In this video, El Risitas explains why Rule of Thirds is a lie, and it’s absolutely hilarious!

Taking a 120-gigapixel image of New York City is certainly a task worth admiring. But of course, someone managed to make it funny by finding a naked dude in the photo. In the largest image of the largest US city by population, it’s probably no surprise… But it still made us giggle.

I may be too old to watch cartoons, but I still love some of them – and SpongeBob SquarePants is pretty high on the list. That’s probably why I found it so amusing when NOAA ship Okeanos Explorer scientist, Christopher Mah, captured their real-life version. He was watching the live feed when he saw them, and he sure made my day.

#7 Best gift ever: Son uses Photoshop to “fix” a photo his dad hates, makes it even worse

Kyle Scheele has pulled out some pretty hilarious pranks using his Photoshop skills and his sense of humor. But my favorite is the one when he “fixed” a family portrait his dad hates by making it worse… Way worse. It’s somehow heartwarming, annoying, and funny at the same time, and his family reaction was priceless.

This is one of those stories that may be hard to believe, but I find it funny on so many levels. First, there’s a linguistic joke right there, considering that the guy shared a photo of actual cheese, not its slang version. And then some more linguistic jokes in the form of puns people came up with when commenting on this story. They still make me giggle and they’re not at all cheesy (sorry, I had to).

#5 This adorable dog adorably ruins all her group photos

This list couldn’t have gone without dogs. They’re our best friends who make us feel loved, who are always there for us, and of course – who make us laugh! In this case, the funny doggo is an adorable Shiba Inu named Hina who always ruins the group shots with her three other sisters. Hina’s human Yoko shares their photos on Instagram, and Hinu is almost always the one who blinks, turns her head, makes a face… We all have that friend, don’t we?

#4 lawyer accidentally turns on cat filter during a zoom hearing

I just couldn’t leave out the cats from the list, either. Well, sort of. Imagine being a lawyer and having a hearing. Thanks to the pandemic, it takes place on Zoom. The atmosphere is serious and formal… And you appear as a kitten. This happened to an attorney Don Ponton, and it sure made me chuckle. His colleague helped him switch it off, but the video still went viral and I think it made the day for everyone who saw it.

#3 Photoshop wizard fixes photos in the most literal way possible

I’ve followed James (Jamie) Fridman’s work for as long as I can remember. So, when he decided to share some of his edits with DIYP, I was beyond excited. Needless to say that I enjoyed writing the article, chuckling all the time while selecting the images to include in it. And other than creating hilarious edits, Jamie also empowers people and reminds them that they’re beautiful just the way they are. Therefore, this story is not only funny but also very heartwarming and it will surely make your day.

Fitness instructor Khing Hnin Wai went viral this year for her workout video. But it’s not just any workout: while she was obliviously dancing in front of the camera, there was a military coup going on right behind her. Nothing fun about the Myanmar events, of course, but Khing Hnin Wai’s little dance in the middle of it is so funny and so pure!

The US president Joe Biden and First Lady Jill Biden met with former president Jimmy Carter and former first lady Rosalynn Carter. A wide-angle lens photo turned the Carters into giants in a tiny house and it almost sent coffee up my nose when I saw it. The longer you look, the funnier it gets!

Grandad’s camera roll goes viral after grandson shares images on TikTok – When you pair grandparents and technology, there has to be a funny story in that. As it turned out for TikTok user eschultzyy, there’s even a viral story. His grandad gave him his old iPad, and it turned out to be filled with hilarious accidental snapshots only grandparents can snap. I hope he didn’t delete them – they’re not just funny, but they are absolutely precious!

I hope that I improved your mood with this funny 2021 recap. If there are some funny photography stories that you’d like to share – I’m eager to hear them!