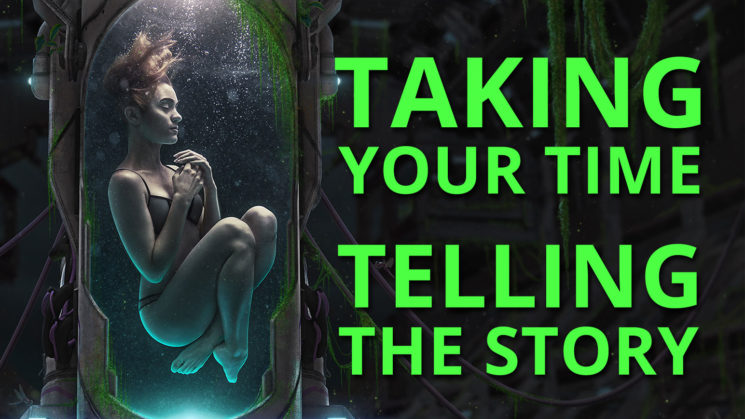 Layers on layers on layers on layers …. I’ve been working on this image for far too long, just long enough, but also not nearly as much as I’d like to? Needless to say, I put a lot of time and love into this edit and really really enjoyed the process of adding in the countless tiny details.

To be honest, it took some major restraint on my part to finally call it “done” and move onto the next project. Seriously though, people – I feel like I could continue to zoom way in and refine/add more details for-EVAH. Which is exactly what I’d like to talk about today: taking your time and adding more details! 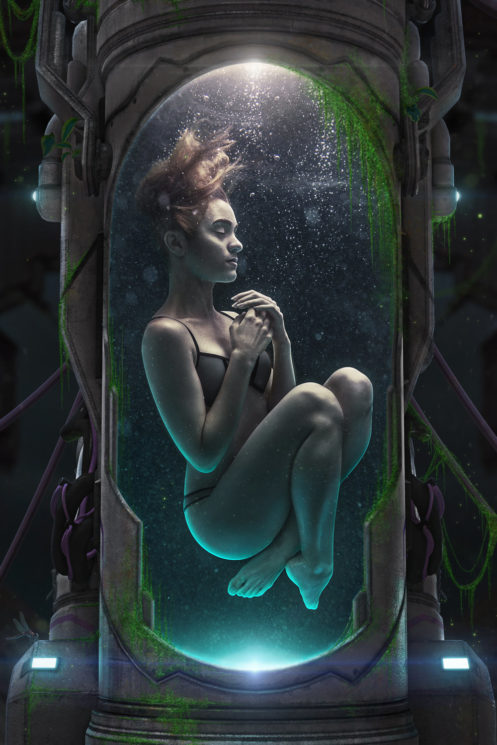 There were several points thoughout the editing of this image where it easily could have been called “finished.” Literally months ago I could have decided it was done, blogged about it, shared it online, and been perfectly happy with the artwork I’d created. However, I think back on those “finished” periods of the edit and am so entirely pleased I decided to stick with it and continue to evolve the story of the image. 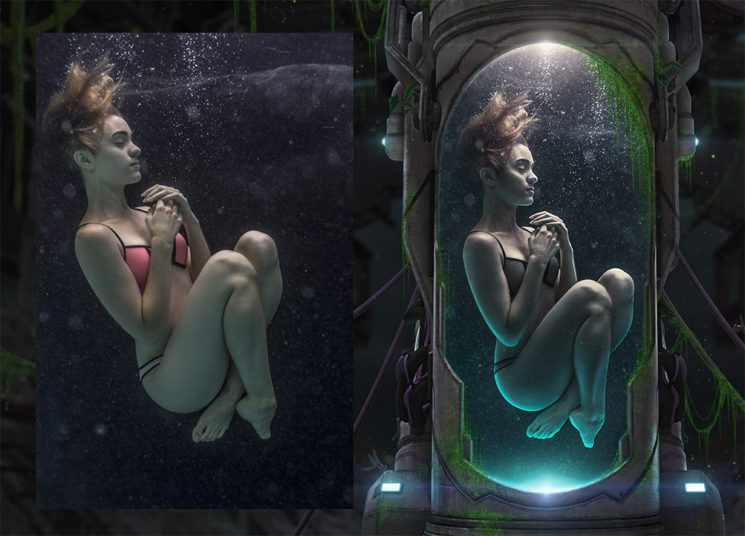 I took this picture of my photographer friend Loren back in July when I had the incredible opportunity to shoot underwater with an Ikelite housing setup, thanks to one of my other amazing photographer friends, Jenna Martin. (Go check out her work immediately. She is the queen of underwater photography!!) I’ve had this idea in my head for ages to shoot someone underwater and create a clone-incubator-testube type image.

So once I knew I’d have the chance to shoot underwater, this idea immediately resurfaced. (Eh eh? see what I did?) I kept imagining a futuristic, sterile, shiny, metal sort of picture with synthetic umbilical cords and details roughly inspired by the “human power plant” scenes from the Matrix (which by the way is still one of my favorite movies ever, deal with it). 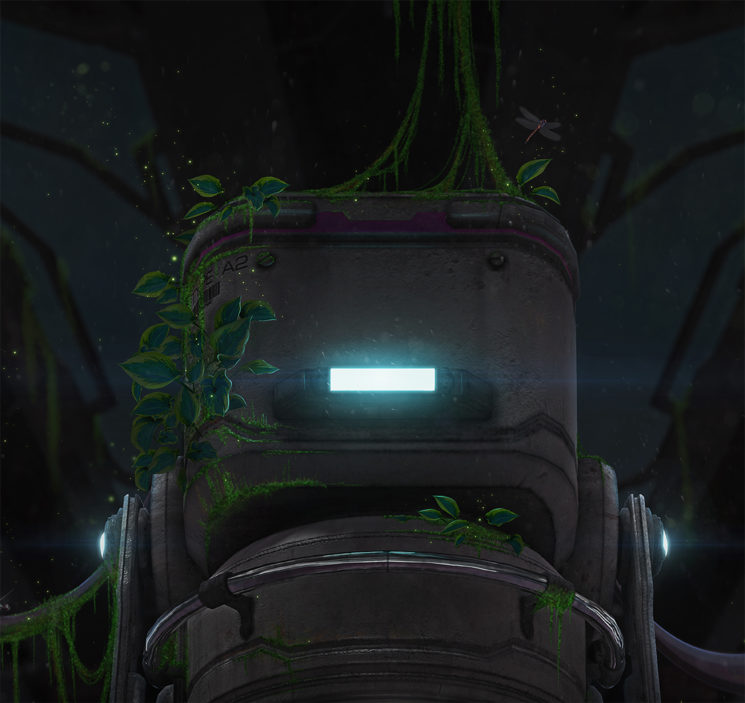 As you might have noticed, the image didn’t quite turn out as it started in my noggin. It was great to shoot with a solid idea in my head, but by not being too attached to my plan I allowed the image to morph into something similar … yet totally different. When I started editing I quickly realized that to believably create a “cloned human” image it wouldn’t make much sense to have them wearing a bathing suit.

They really should be nude … last I checked people don’t grow their own clothing as they develop …. and I just wasn’t quite comfortable photoshopping bare boobs/nipples onto my close friend. Call me old fashioned or whatever. So I came to the conclusion that she could easily be a normally grown adult who was in some sort of a stasis chamber. A-La the “Alien” franchise or Mr. Freeze’s wife from the beloved 1997 classic “Batman & Robin” (….yeah I went there).

With my updated idea blossoming in my brain, I downloaded a 3D rendered tank thing and space hanger-esque image from my main squeeze the RAWexchange Store, and they couldn’t have been more perfect for what I was hoping to create. I got to work placing Loren in the tube, adding the machine onto the background, and it eventually reached a point (as I mentioned before) where I almost called it done. I was so excited about how it was looking already and just wanted to share it, plus I did think it was cool how empty and solitary it felt. 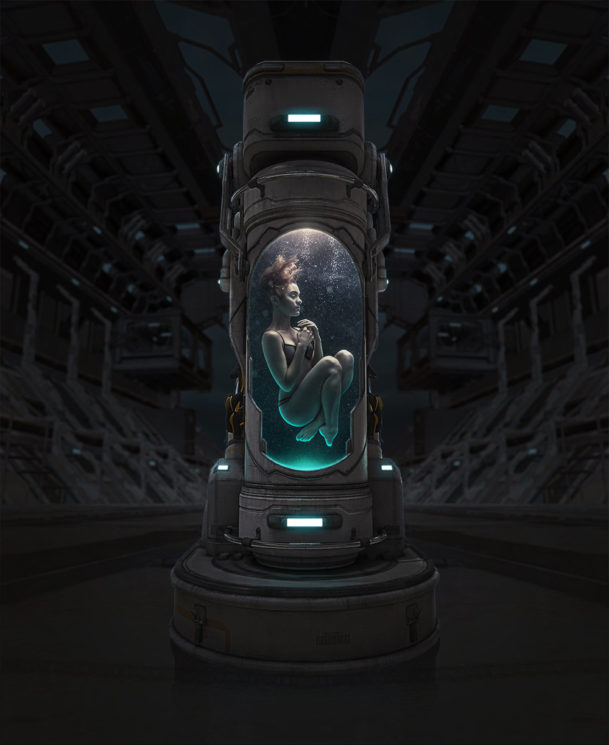 After a day, I looked at it again and it almost seemed TOO sparse, so I thought to myself, “Hey self, I bet this machine would need a lot of wires and things to operate … and some leading lines driving the attention to the subject wouldn’t hurt.” So I went about adding in some wires trailing off from the sides. (See below) 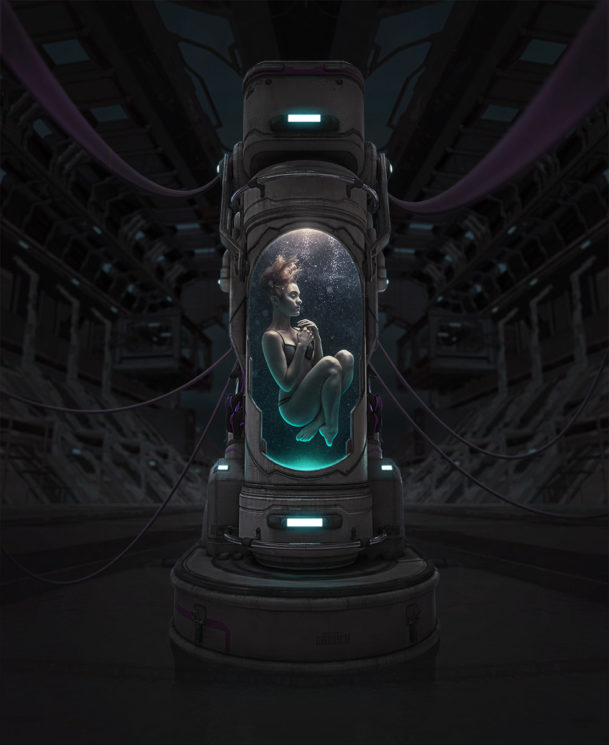 After the cords were in place, I found myself thinking more about the story behind this image. “You know self, it is pretty empty and solitary feeling … where is everyone else on this ship? (I’ve decide this is on a space ship, keep up). What if everyone on board was gone? Perhaps wiped out by some alien plague or something. She would just be left like that, suspended in animation, just as she was the moment she entered her voluntary sleep … A sci-fi sleeping beauty.” Now my gears were really turning. “If she was just floating there for years, maybe some plants would start to grow around her.” So as you know, I ended up painting in some dangly mossy vines. 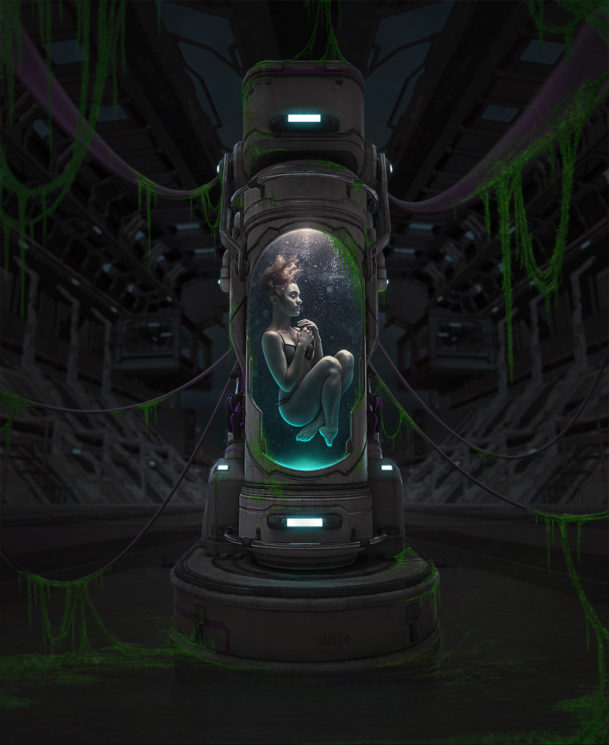 Here was another perfect example of a time when I thought it was finished. I was so jazzed about my newest addition and was quite antsy to share the image. However, I stuck with it and decided to add in some clusters of leaves to round out the creeping foliage. 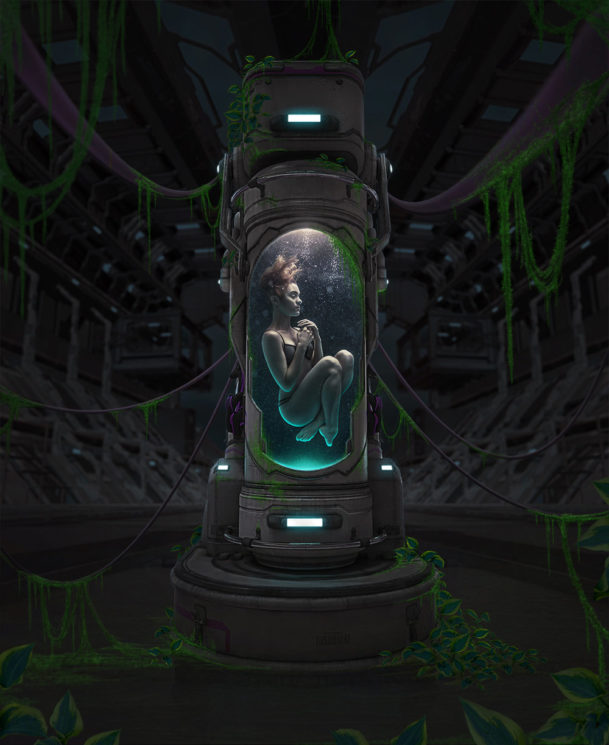 At this point I was sure it was done. Right? Totally solid image. Time to share it for realz this time …. well funny story, life happened and I just didn’t have time to work on a post. Then I did this crazy amazing thing where I went to Europe for 2 weeks. (I’ll be talking about some of those adventures at length in future posts, so stay tuned!) My newest creation had to be “shelved” for a while, so I didn’t lay eyes on it for quite some time. Once I was home from my vacation and popped open my “finished” image, it turned out there were just a few more details that my brain decided to sprinkle on. Having not looked at it for so long I had all these fresh ideas! What if the plants were creating some floaty green spores? Wouldn’t there also be vines taking over the background? What if there were some insects flitting around the scene? (Because dragonflies.) What if the lights I added to the tank had some lens flares? (Um, duh… because lens flares.) 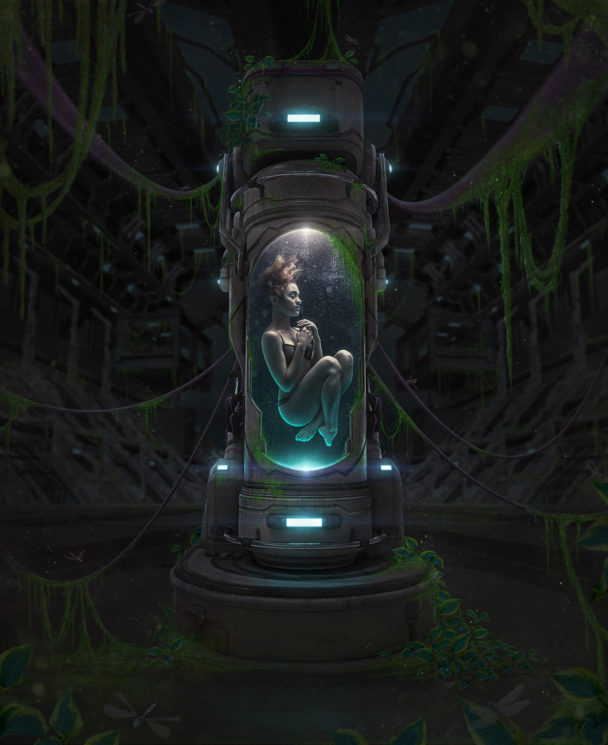 Basically what I’m getting at is that if you give yourself some time to think about what story your creation is trying to tell, your image just might not be as finished as you think. You can potentially keep adding more and more layers of details to help tell that story, even if you didn’t know the whole story to begin with.

I Created Self Portraits In Iceland & The Pacific Northwest To Tell My Coming Out Story
« Yashica announces Y35, a digitized version of Yashica Electro 35
An easy way to create luminosity masks for perfect landscape selections »