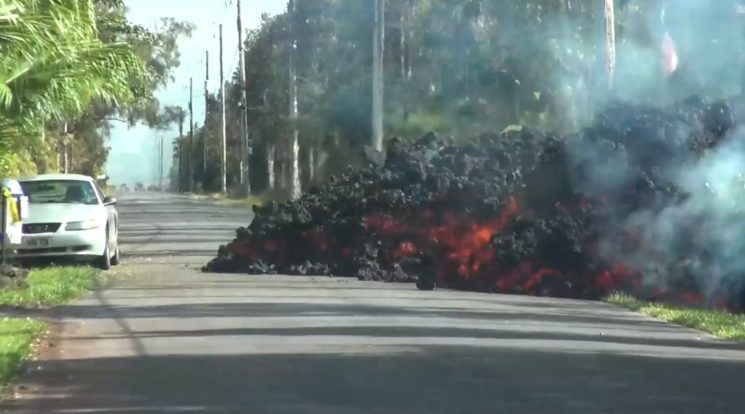 There has been a steady flow of photos and footage from Hawaii’s Mt. Kilauea since it erupted a few days ago, but this time-lapse video is probably one of the most intense we’ve seen so far. Taken by WXChasing, it shows slow-moving lava slowly devouring a Ford Mustang parked on the side of the street.

Among the most active volcanoes in the world, Kilauea has been erupting continuously for more than thirty years with its lava normally flowing underwater straight into the sea. However, the eruption a few days ago opened fissures that destroyed houses in Leilani Estates and surrounding residential areas. So far, almost 2,000 people have been evacuated and National Guard troops have been called in to ensure the safety of the residents.

The lava in the video is from one of the fissures created by the eruption. Although it looks breathtaking, taking photographs in these areas is extremely dangerous. New vents could easily appear any time and they can be deadly. The footage was taken by professional storm chaser Brandon Clement. You can see more amazing footage like from him on his Facebook page, Youtube, and Instagram.

Here’s another video taken by Clement of lava slowly crushing a gate:

As Kilauea continues its destruction across the island of Pahoa, we wouldn’t be surprised if we see more footage and photos of lava destroying property.