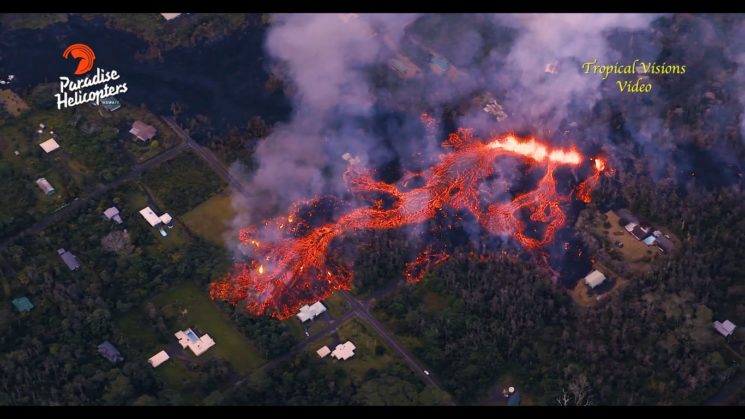 One of the world’s most active volcanoes, Kilauea in Hawaii’s Big Island, erupted on Thursday. The eruption is threatening hundreds of homes, as molten lava is bursting from fissures that opened in the Leilani Estates. Mick Kalber has filmed the eruption from a helicopter. It shows the biggest fissure eruption he has seen so far:  it is impressive, but at the same time truly heartbreaking.

After Kilauea erupted on Thursday, the ground split open shortly after, creating fissures filled with hot lava. According to the BBC, the new fissures opened overnight and lava leaped up to 230ft (70m) in the air. The island was also hit by a 6.9 magnitude earthquake, the largest in the last 42 years. Reportedly, it’s expected that the earthquakes might hit the island again. The fissures are not only shooting lava in the air but also releasing toxic gases. Due to all the hazards, around 2,000 people have been evacuated from the island so far.

Kilauea has been in constant eruption for 35 years. It’s a tourist attraction and it has given photographers and filmmakers some splendid shots. The video Mick Kalber shot is spectacular, as he describes it himself. But of course, at the same time, it breaks my heart when I realize that more than 26 homes have been devoured by lava so far.

« Hasselblad officially announces a XCD 21mm f/4 medium format mirrorless lens. And it’s $3,750
How to use your camera in extremely cold conditions so it does not freeze to death »