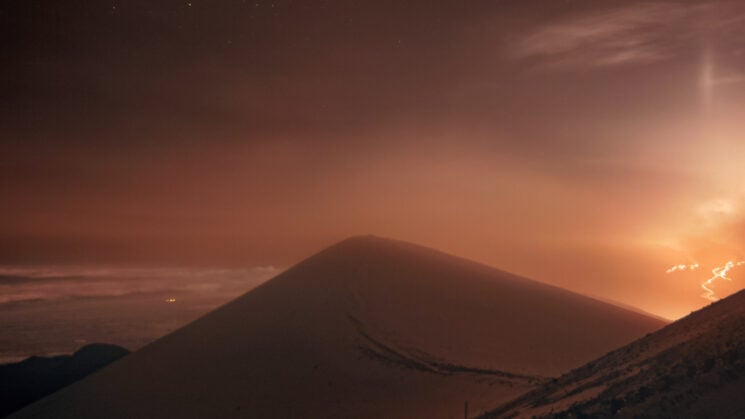 A spectacular image was captured showing both the lava flows from erupting volcano Mauna Loa and some light pillars. The image was captured by one of the International Gemini Observatory’s Cloudcams. The cloud cam operates 24/7 near the snow-covered summit of Maunakea (the highest point seen in the image), one of the other volcanos on Hawaii’s Big Island.

What makes the image special, however, is the fact that an extremely rare phenomenon is included. Lava light pillars are essentially the same as sunlight pillars but are only seen under the correct atmospheric conditions alongside an erupting volcano. 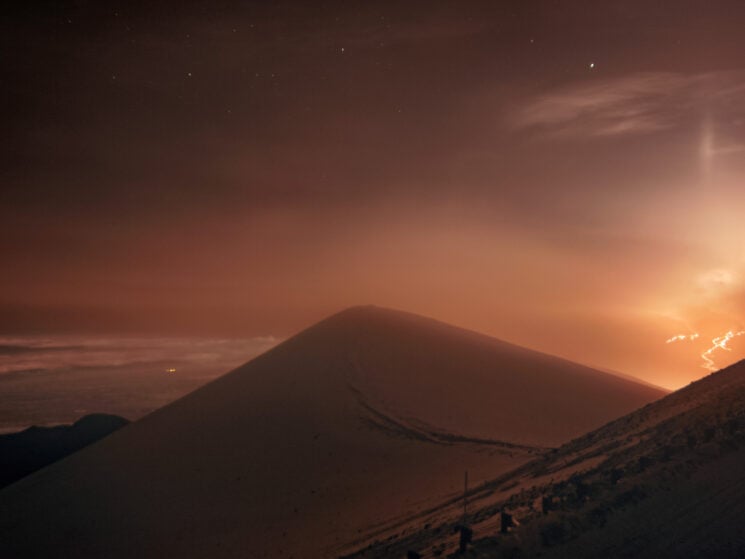 The uncropped version of the image. The lava and light pillars can be seen on the right hand side of the photo.

The right circumstances must align in order for lava-light pillars to appear. An erupting volcano (which provides the source of light near to the horizon) is needed, but also a high-altitude cloud and freezing temperatures. These form a collection of millions of horizontally floating ice crystals to reflect the light towards the observer.

Mauna Loa is located on the Big Island of Hawaiʻi, and began erupting on 27 November 2022. The reddish glow from the flows from the caldera at the summit can be seen across the island. This is the first time the world’s largest active volcano has erupted in the last 40 years.

The eruption is being closely monitored by residents and staff at the Gemini observatory alike. At the moment, the eruption poses no threat to the Maunakea observatories and the flow remains far from any inhabited areas.

« Why do some people travel thousands of miles to photograph storms?
FoCal goes mobile with their new iPhone and Android app for lens autofocus calibration anywhere »