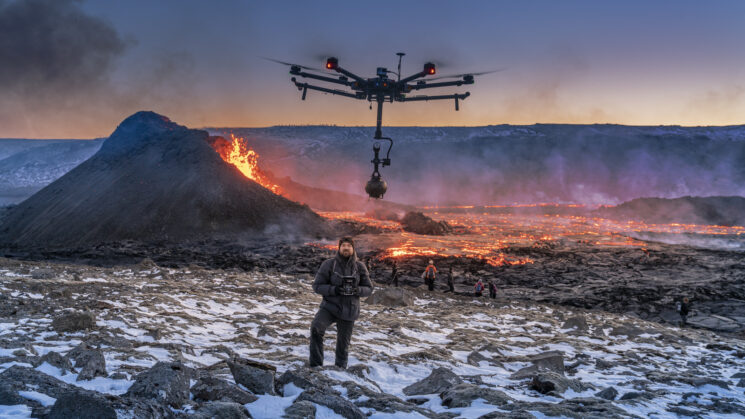 There’s been a lot of talk and coverage of the Mt. Fagradalsfjall volcano that continues to remain active in Iceland. Located in the Reykjanes Peninsula, the volcano erupted for the first time in 800 years and has continued to spew out lava now for over a month.

Photographs and filmmakers who’ve been able to have flocked to the scene, and it’s produced some amazing images and footage. But photographer Ragnar Th. Sigurðsson and drone pilot Arnar Þór Þórsson decided to film it a little differently. They used the Insta360 Pro 2 mounted to a DJI Matrice 600 drone to shoot 360° footage in glorious 8K resolution.

To create the footage, the pair flew the drone with the Insta360 Pro 2 mounted below pretty close to the flowing lava, although not so close it caused an issue with things melting. 360° footage is one area where 8K footage really makes a lot of sense. After all, you’re only ever looking at a small segment of the whole picture at any given time. 8K at 360° equates to around 1080p quality when you’re looking at a relatively wide 90° field of view. So more resolution for the whole means more resolution for that small segment.

360° footage like this is invaluable as an educational tool too, allowing people to see what it’s really like in these environments with the freedom to turn their head and see all angles to find out what else is going on around them.

Plus, it just looks really cool!