Fresnel lenses are found in all kinds of things from the lenses and light modifiers we use in photography and filmmaking to lighthouses that guide ships at sea. The lens was developed by French physicist Augustin-Jean Fresnel, after whom it was named, specifically for use in lighthouses. It allows for the construction of huge aperture and short focal length lenses but using less material than more traditional lens optics.

How exactly do they work, though? In the video above, David Willey explains how a Fresnel lens functions and why it is the shape that it is using a simple blackboard model and some magnetic strips. But essentially, Fresnel lenses are just regular lenses with big chunks taken out of them. 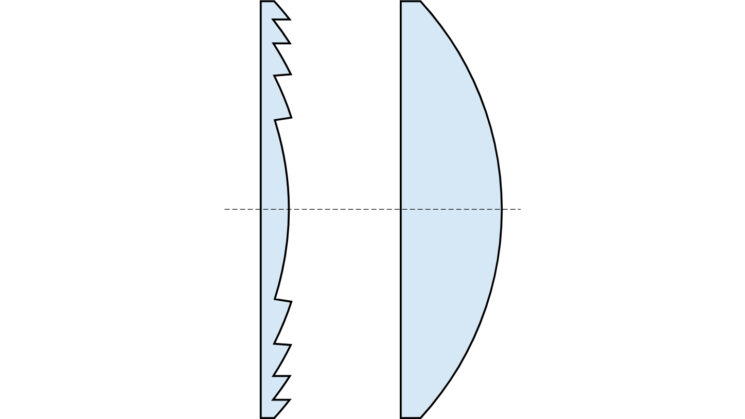 Typically, for photographers and filmmakers, the types of Fresnel lens we’re used to are modifiers to go on our lights, turning them into spotlights or projectors. There are a number of different Fresnel modifiers and lights available from companies like Godox, Aputure and Maxima to name a few. Fresnel lenses are also built right into pretty much every popup flash and speedlight, too.

But they’re also used in the construction of optical lenses, too. It’s what’s allowed Nikon to shrink its lenses down in its “PF” range of lights, like the Nikon AF-S 300mm f/4E PF ED VR lens, which weighs a mere 755g and measures only 147.5mm long. By comparison, its predecessor, the Nikon AF-S 300mm f/4D IF-ED – a lens I’ve owned for more than a decade and love – comes in at almost twice as heavy; a whopping 1,440g and 223mm in length.

When you see the lenses side-by-side, as above, that’s a pretty massive difference. I’m assuming Nikon also upgraded the crappy tripod collar that came with the D version, too. It’s an even more impressive weight saving, though, when you consider that Nikon was able to shove VR (vibration reduction) into the new E PF lens, which the older D version does not have.

So while they may typically be used for lights, they’re also becoming more common in lenses, too, especially as photographers are demanding smaller lenses to go with their new smaller mirrorless bodies.

« Aerial 8K 360° footage shows the beauty and power of Icelandic volcano lava flow
Is the content on your Instagram feed food or poison? »