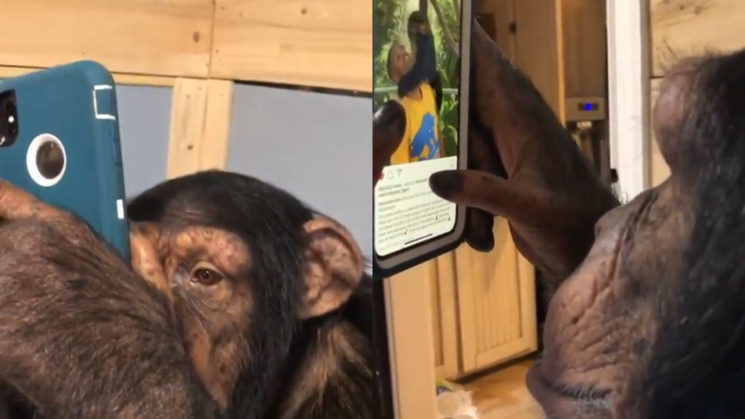 Many of us get enthralled in social media these days. And for photographers, that means Instagram in particular. But one Instagram user is going viral for a very unusual reason. They’re a chimpanzee. They scroll through the feeds, look at images and videos then flick back like a pro.

Posted to Instagram by conservation advocate Mike Holston, the video has received already seen over 1.6 million views. While the ease with which the Chimp manages to navigate Instagram, or even understand the concept of a touch screen smartphone, is quite incredible, not everybody is happy about the video.

In response to the Instagram video, a post on the Jane Goodall blog quotes Dr Goodall as saying…

I am very disappointed to see the inappropriate portrayal of a juvenile chimpanzee in this video which is currently circulating on social media. Chimpanzees are highly social animals, very intelligent and have complex emotions like humans – it is imperative that we portray them appropriately and that they receive the best possible care in captive environments.

Portraying chimpanzees in this way on social media is also perpetuating the illegal pet trade in great apes, and as they cannot be domesticated, interactions with humans as displayed by this video are highly dangerous, as well as harmful to the well-being of the chimpanzee.

While videos like this often seem very cute, and in this case even impressive, they can also do far more harm than good, especially when it comes to the public perception of an animal as a species.

Given the current issues facing the planet, with countless species being wiped out in the past handful of decades and many more on the brink of extinction today, we as a species of our own should probably think more carefully about what we post to social media.

Chimp steals a 360° camera to take selfies with friends

« U.S. Appeals Court rules you CAN’T just take images off the web and reuse them under “Fair Use”
Shooting in a small space – a brief tour of my tiny home studio »