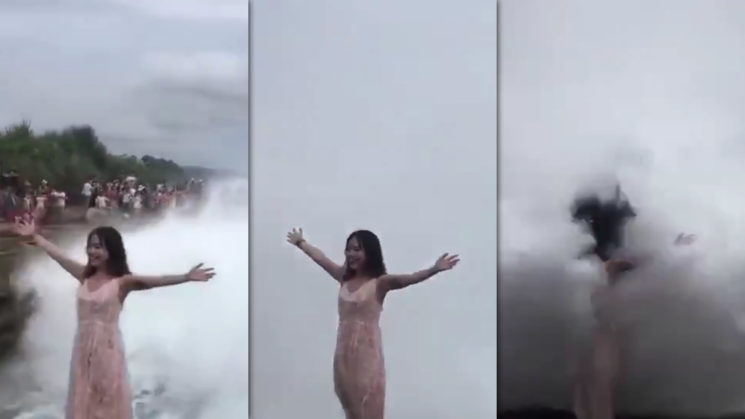 Fortunately, this isn’t another death-by-selfie, but it is another example of somebody being completely unaware of their surroundings for the sake of getting that perfect Instagram shot. Well, this unnamed lady has got her viral wish, although probably not for the reason she was hoping.

The lady, while posing for a photo in Bali, was suddenly hit by a massive wave that almost took her clean out. Luckily for her, she appeared to get away with just a few minor cuts and bruises.

The footage reportedly went viral on Chinese social media shows, and was shared by Chinese news outlet People’s Daily, and ends with onlookers screaming. It’s a miracle that she managed to get away so cleanly from a wave with such obvious massive force. But that’s exactly what she did. A follow up post shows a visibly shaken and very soaked subject with just a cut on her shoulder and a bruise on her elbow.

The incident reportedly happened in a cove on the Balinese Island of Nusa Lembongan. It’s famous for the massive waves that crash up against the rocks, and the spot has been nicknamed “Devil’s Tears” after the mist that hangs in the air following the surf, News.com.au reports.

According to reviews of Devil’s Tears on TripAdvisor, one review from August 2018 states that “there are absolutely no warning signs that every area beyond the immediate vicinity of the parking area is extremely dangerous”. A more recent review from February 2019 says “there are virtually not caution signs, but some locals told us about some sad occurrences there, so better be safe than sorry. Don’t risk your life for a nice photo”.

That last line says it all, really. While this lady was very lucky, many are not, and those numbers seem to be increasing as more and more people seem to be willing to do anything to get that perfect selfie.

Be careful out there, folks!

Watch: Girls swept away by a huge wave while posing for Instagram