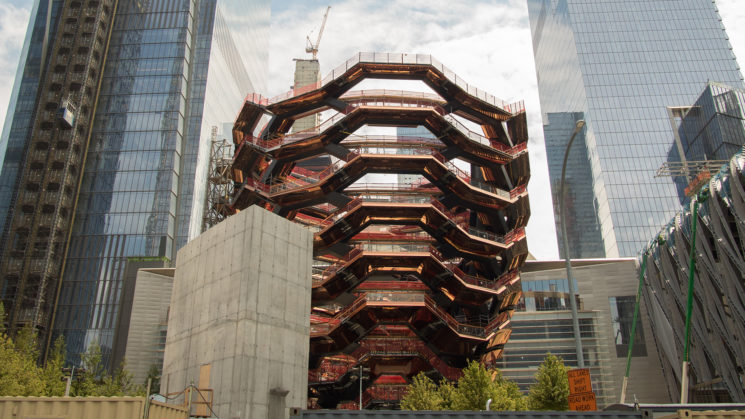 The Vessel, in New York City’s latest luxury neighbourhood, is Hudson Yards’ fancy tourist trap. But it’s also a rights grab when it comes to photography. Initially, spotted by Gothamist, two particular clauses in the Hudson Yard Terms & Conditions were extremely overbearing. Terms and conditions to which you agree as soon as you enter the place.

Those clauses have since been combined into a new “My social media posts” clause. The new clause is a little shorter and combines the two previous clauses together with a little more clarification. But it still looks like pretty rights grabby to me.

MY NAME AND LIKENESS. If I appear in, create, upload, post, or send any photographs, audio recordings, or video footage depicting or relating to the Vessel, I grant to Company the unrestricted, worldwide, royalty-free, perpetual right and license (with the right to transfer or sublicense) to use my name, likeness, voice, and all other aspects of my persona for the purpose of operating, developing, providing, promoting, advertising, and improving the Vessel or any other products or services provided by Company or its sublicensees (in either case, now known or later developed)….

MY CONTENT. If I create, upload, post or send any photographs, audio recordings, or video footage depicting or relating to the Vessel, I grant to Company and its affiliates the irrevocable, unrestricted, worldwide, perpetual, royalty-free, sublicensable, and transferable right and license to use, display, reproduce, perform, modify, transmit, publish, and distribute such photographs, audio recordings, or video footage for any purpose whatsoever in any and all media…

So, under the original T&Cs, you are essentially providing a model release as well as a license to use the images to do pretty much anything they want with the images for any purpose. Naturally, once the Internet caught wind of this, judgement was strong and swift.

What a bad idea — and also a badly drafted clause. Let’s explore. 1/ https://t.co/mZEsdyoEnw

It also applies to "audio recordings"(!) again regardless of where they were recorded. So if you go into the Vessel and then make a podcast about your visit, they claim a right in that too. 3/

But because they only take a personal promise not to make commercial uses, they have no recourse if *someone else* makes a commercial use of your media. 5/

It's always amusing to see a clause this overreaching and also this badly drafted, like watching the mustache-twirling villain slip on the banana peel he dropped and fall face-first into a giant cake. 7/7

Those two clauses have now been removed and merged into a single clause titled “My Social Media Posts”, which doesn’t really change much.

MY SOCIAL MEDIA POSTS. As between me and Company, I retain ownership of any photographs, text, audio recordings or video footage depicting or relating to the Vessel that I may create (the “Vessel Media”), unless otherwise agreed by me and Company. If I post any Vessel Content to any social media channel, I hereby grant to Company and its affiliates the right to re-post, share, publish, promote and distribute the Vessel Media via such social media channel and via websites associated with the Vessel or Hudson Yards (including my name, voice and likeness and any other aspects of my persona as depicted in the Vessel Media), in perpetuity. I understand that I will not be entitled to any compensation from the Company, its affiliates or their respective vendors in connection with the same.

A spokesperson for Vessel told Gothamist that “the intent of the policy is to allow Hudson Yards to amplify and re-share photos already shared on individual social channels through our website and social channels. This is a practice utilized at nearly all major attractions and we wanted to over communicate, be transparent and disclose toa ll users”.

It’s not as all-encompassing as it was, and they no longer demand the ability to license your work to others, but I think if I ever visit this place, I’ll be leaving my camera at home and my phone in my pocket.

Whether or not the terms, even the new ones, are actually enforceable is another matter. You can read the complete terms and conditions for yourself here.

Do terms like this put you off visiting places? Does it stop you shooting photos of them? Or do you not even care?