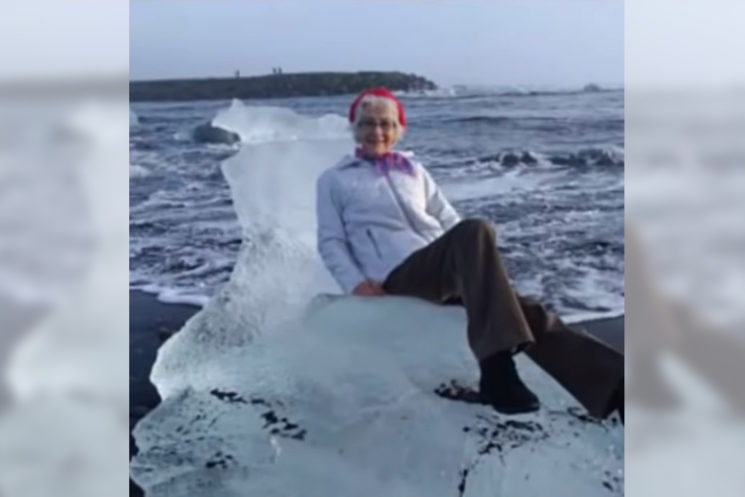 We have all done reckless, stupid or plain silly things for the sake of a photo. A 77-year-old Judith Streng from Texas is no exception. She sat on an “ice throne” in Iceland to pose for a fun vacation snapshot. But when a wave dislodged the chunk of ice, it started drifting away from the shore and the lady almost got washed out to sea.

Judith was on a vacation in Iceland with her son, who took the photos of his mother on the “ice throne.” In a Skype interview to Good Morning America, Judith explained that she saw that interesting chunk of ice and thought that it looked like fun. She sat on it to pose for a photo, but then a very large wave came in, making her “throne” rock. She felt that she was slipping off, and the chunk of ice started to float away from the shore. Luckily, she was saved by Randy Lacount, a licensed boat captain from Florida who happened to be nearby.

After the incident, Judith’s granddaughter Catherine Streng shared the photos on Twitter, along with her father’s texts: “Iceberg queen. Lost her kingdom when she drifted out to [sea]! No joke. A coast guard rescuer had to save her and bring her back to shore!”

This tweet got retweeted almost 72,000 times, making the grandmother’s adventure go viral. It got followed by some hilarious comments such as “Elsa in 60 years” and “Ice Ice Granny.”

When I learned that Judith was fine, I couldn’t help but laugh at these photos and some of the comments I read. After all, she herself has a great sense of humor and makes jokes about the incident. “I’ve always wanted to be a queen. I mean, come on, that was my chance,” she said to Good Morning America.

However, this is still a dangerous thing to do. All’s well that ends well, and this incident has given us some giggles because nothing bad happened. But it could have ended much worse! So I’ll use this opportunity to remind you: no matter how fun the photo may be, don’t be reckless and put your life into danger.

« Actor Jason Momoa has an impressive collection of Leica cameras
This Youtuber made a real, working lens using sand and rocks »