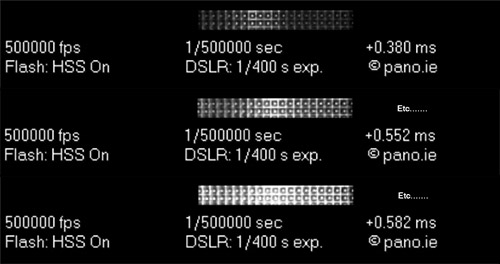 The SA4 is usually used to study ballistics and explosions, but Florian turned it on a strobe, playing a 500,000 movie at 25 FPS – an X20,000 reduction in speed. Actually, he did it twice, once that shows the strobe firing at 1/32 power with HSS on, and one that shows the same power shot with HSS off. The videos and my thoughts after the jump.

This is what we normally use for flash when the camera can sync. The flash fires one continuous burst of light. In our case, from 0.036ms to 0.278msm which means that the burst was about 1/5 of a millisecond.

HSS or High Speed Sync is a way to let the strobe add light into the exposure even if it is too slow to sync.

Here is how David Hobby explains HSS in a way even I could understand: “High-speed sync (also known as “Focal Plane,” or FP sync) is a special protocol that some cameras and flashes share. The camera controls the flash (whether remote or on hot shoe) in a way that causes the flash to pulse through the exposure.“. Now this is pretty cool because it means that sometimes (if you are lucky to have the “right” camera) the strobe can be used to add light even if you are shooting at 1/1000 of a second. You would lose some light yes, but some is better than none.

One things that I learned from that comparison is that while the HSS-Off burst was over at about 1/5 millisecond, the HSS-On was still throbbing at the end of the clip, which explain why you can’t rely on HSS for motion freezing.

One last thing, Neil van Niekerk has what is probably the best HSS tutorial on the planet, both from a technical perspective and a practical one. You may wanna give it a read if you are into that kind of things.

P.S – If you are into camera and slo-mo, check out our shutter slo-mo compilation from a few weeks back.

Is it still worth using neutral density over HSS with today’s flash tech? Probably not