A friend who shall remain anonymous (for his own protection) shared this discussion he had with me. His friend, Jake Redacted, just bought a new camera. I suspect he’s never seen one of those new lens cap designs, where you “Pinch” the lens rather than push on its sides.

Obviously, pushing the sides of the lens cap will not help here, as it uses a different mechanism. But even if this is the first time you are seeing this type of lens cap, you have to be seriously drunk to not figure it out.

This, of course, was the perfect setup for the following discussion: 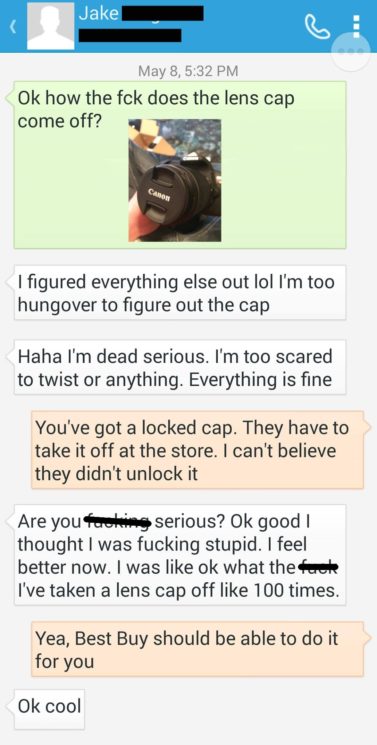 But it does not end here, they actually did go to Best Buy. According to the same friend,  “His girlfriend went with him and text me to let me know how stupid he felt as the sales associate simply squeezed the cap and asked ‘what seems to be the problem?’ “.

According to Canon Rumors, Canon changed their lens cap design around late 2012 (and even non-brands uses this pinch method now). But if this is the first lens Jake bought in a long while, he may have never stumbled on this design before.