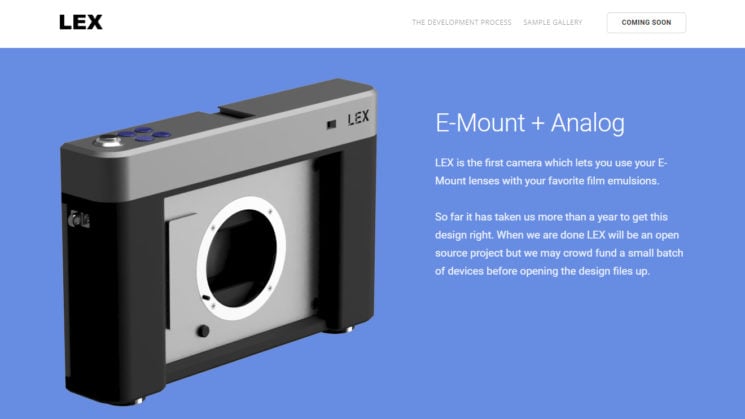 Well, this is an interesting turn up for the books. It turns out that while many photographers are trying to adapt their old film cameras to their shiny new Sony cameras, one photographer, Alexander Gee, was doing the opposite. He wanted a film camera that would work with his modern Sony E-Mount lenses.

LEX, as the camera is called, is a one-man operation, and it seems to have come quite far already. Gee plans to make LEX fully open source, once complete, with much of the camera being easily 3D printable and easy to modify. Don’t have Sony lenses? No problem, just modify it for another camera mount and print that out instead.

3D printed cameras aren’t a new idea, but there’s a lot more thought and testing gone into this one than more primitive 3D printed cameras. Gee has documented the entire build process over on the LEX website. Some parts, obviously, can’t be 3D printed, and Gee has repurposed the shutter mechanism from a Sony A7. And a few parts of the body have made using cast ZA2 alloy.

Although the first working prototype looks, as Gee describes, “like a bomb prop from a movie”, he says that it actually worked. The camera contains some custom electronics, presumably to control things like the lens aperture, and shutter mechanism.

While it doesn’t support DX coding, Gee says you can tap in any ISO from as low as 6 all the way up to 512,000. Obviously, though, this is just for the meter. The actual ISO will still depend on the film you’re using and how you intend to develop it.

Once LEX is complete, Gee may consider crowd-funding to run up a small batch of completed cameras. There’s no word on exactly when that may happen or how much they’ll cost. But after this, the files are expected to be released for you to make your own.

Hopefully, by then, we’ll have a better source for shutter mechanisms than ripping them out of Sony A7 cameras.

Check out the complete development process on the LEX website, and don’t forget to check out the sample photos shot by LEX.