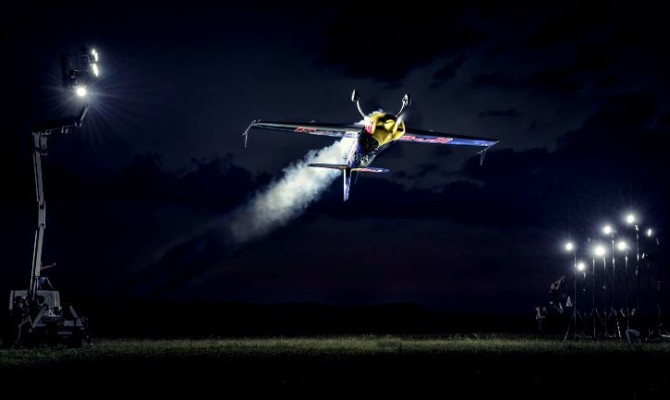 Red Bull always seems to be up to something (perhaps it’s the “wings”), trying to impress us with various antics to get us to buy their overrated energy drinks.  But, on the plus side, it affords those of us in the creative world with some great inspiration.

In one of their most recently-released videos, stunt pilot Martin Šonka dips his wings while flying dangerously close to the ground betwixt two 15-light banks of strobes for some incredible high-speed action shots.

When photographer Dan Vojtěch asked, “How low can you go,” Šonka replied, “Pretty much all the way,” flying mere feet off the ground.  With having to shoot at an incredibly fast shutter speed to capture the action, a handful of strobes was not going to cut it, so the team set up a total of 30 lights to freeze the plane in mid flight.

« Photos of The Perseids Meteor Shower With The Milky Way and Northern Lights!
Photographer Loses Copyright Suit Against Mapmaker Because of Licensing Technicality »