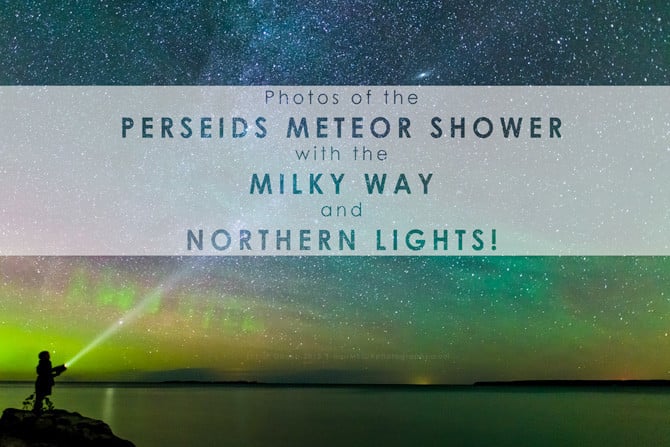 Sometimes the cosmic forces of the universe just align to give you the opportunity to produce some really really unique photographs.

There is no other way to explain how I was able to capture these photographs of the Perseids Meteor Shower with the Milky Way and the Northern Lights in a single frame.

The unlikely chain of events goes something like this… 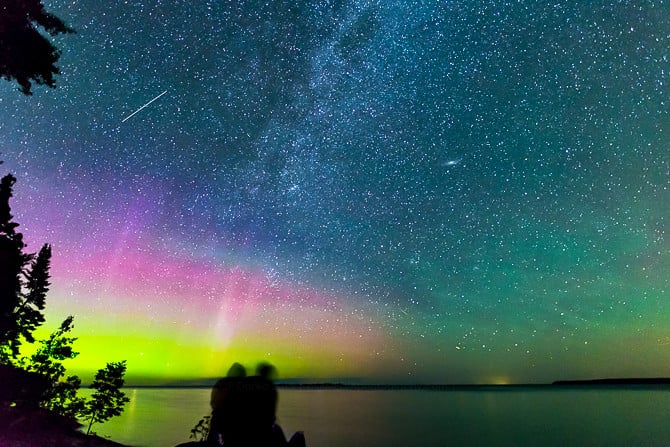 The family and I were supposed to take a week off and go camping last week – except a few last minute projects meant that I couldn’t get out of the city until mid-week so we decided to go up to our family cottage instead (on Georgian Bay, Ontario near Lion’s Head).

After putting the kids to bed, I was sitting on the porch with a nice cottage beer flipping through my Twitter account – which was full of news about the peak of the Perseids Meteor Shower…tonight…as in RIGHT NOW.

I’m a little slow at the cottage (and in general perhaps), so it took another beer or three to realize:

Hey wait a minute!  The peak of the Perseids Meteor Shower is tonight…and I’m up north at the cottage in the middle of nowhere…and the sky is perfectly clear…and its night!

So I grabbed my camera, tripod and went and woke the kids up to ask them if they wanted to go down to the beach to see a meteor shower.

(For future reference, if you wake a kid up in the middle of the night and ask them if they want to see a meteor shower – you’ll get a pretty enthusiastic response that is a lot of fun).

So, we all headed down to the beach to lay on the picnic table and stare at the sky. 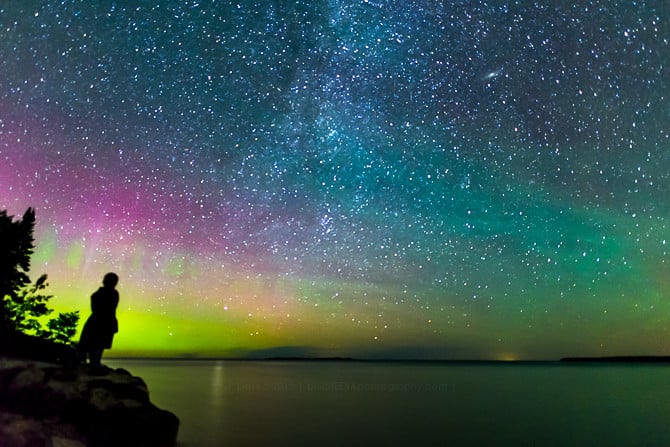 The beach just happens to face the east, which just happened to give us a perfect vantage point to watch the meteors streaking out of the sky over the lake from the north-east.

The meteors were pretty amazing.  Tons of smaller ones on a regular basis and then every once in a while, a big one would streak by – which the kids really enjoyed. 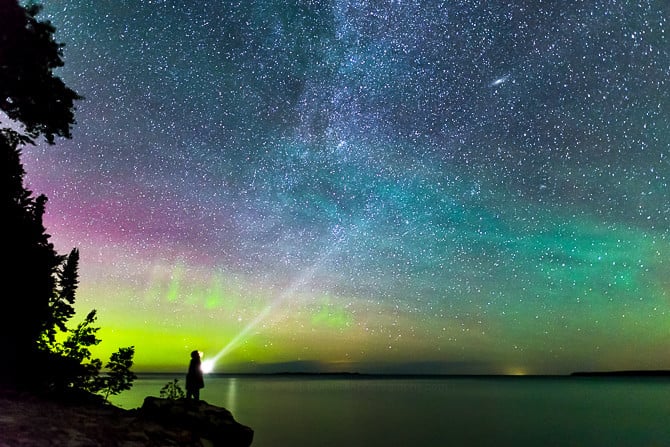 While all of this was going on, I set up my camera (Nikon D800 with a Nikon 20mm f/1.8, and a Vello Wireless ShutterBoss remote shutter release) to shoot a few photos.

The camera settings and techniques were pretty similar to what I did for my Milky Way selfie – so click here for a detailed explanation.

Looking north along the beach I noticed that the Milky Way was just edging into the top of the frame.  This end of the Milky Way isn’t as dramatic as the other end (below), but it was still pretty amazing that it just happened to be in the perfect direction to compose a photo of the meteor shower with the Milky Way. 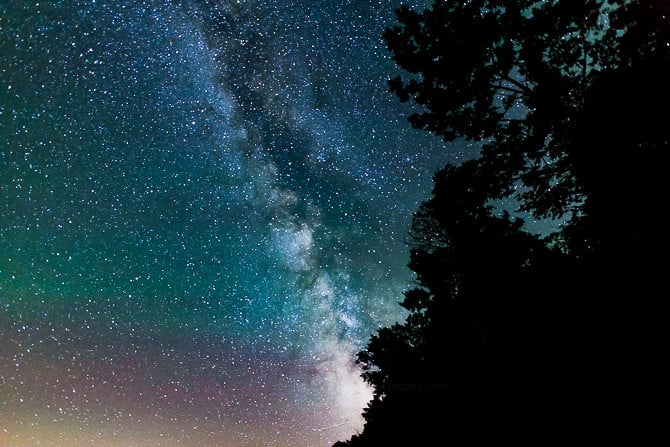 So I composed a photo with the tree line and the beach framing the left hand side of the frame, the horizon and the lake along the bottom and the night sky, Milky Way and meteor shower filling the rest.

At this point I noticed that the photo previews on camera showed a weird green and magenta glow on the horizon.

To the naked eye, looking carefully down the beach, I could just barely make out a subtle glow – it kind of looked like a very dim light shining through a cloud.

But on camera, there was no mistake that we were looking at the northern lights! 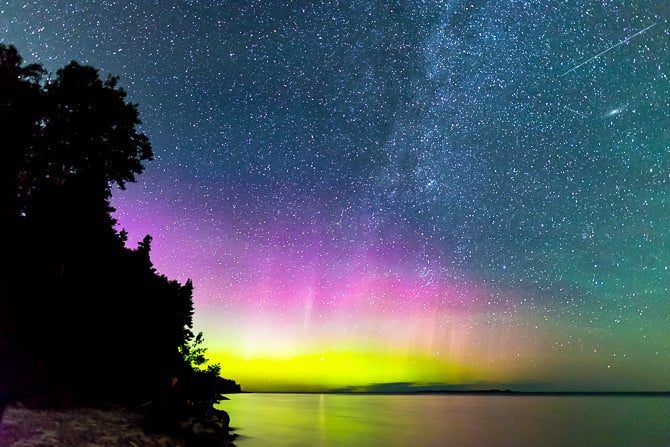 Its pretty rare to see the aurora this far south (I’m in southern Ontario, not the arctic) and it’s especially rare to see it in the summer – so it was amazingly lucky to see the northern lights and the Milky Way and the Perseids Meteor Shower all at the same time. 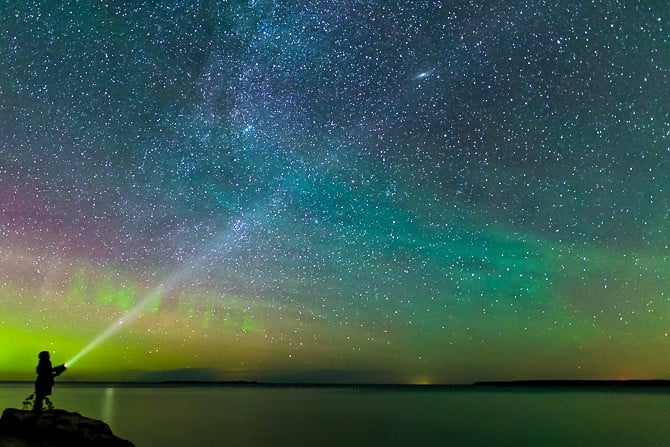 I ended up with about a half dozen frames before the kids got too tired and we had to put them back to bed.

Of course photographing meteors is completely random – you never know what you’ll see during the 20 seconds the shutter is open, but in the end I was really happy to get at least one photo that featured at least a few meteors, the Milky Way and the northern lights. 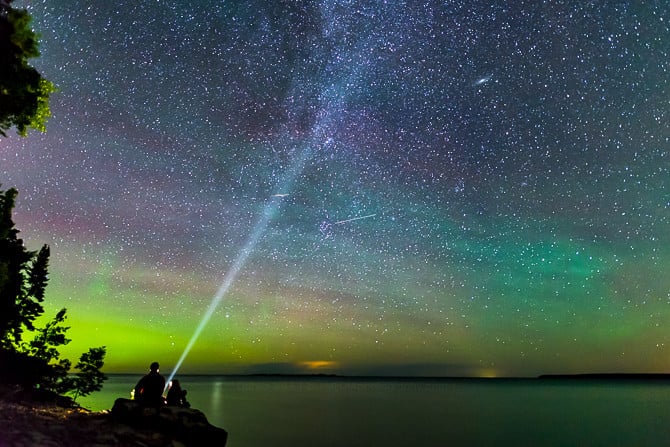