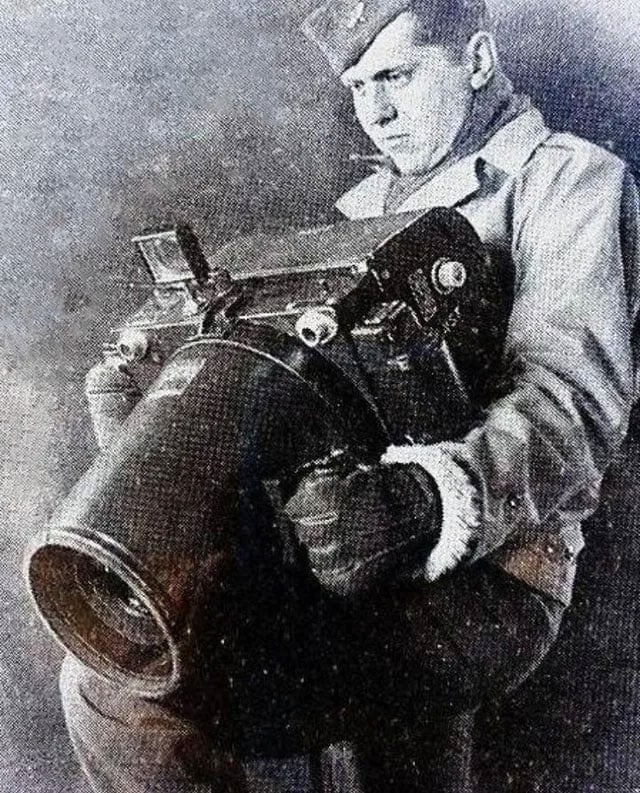 You thought your full-frame DSLR with a telephoto zoom lens was heavy? Well, check this out. This gigantic camera was used in World War II to shoot aerial photos. Just like its size, the weight was massive as well: with a 24″ lens, it weighed 75 pounds (34kg)!

This photo of a soldier posing with the camera emerged on Reddit and it was shot around 1942. The camera was first identified as Kodak K-24, but another user noted that it’s actually a Fairchild K-17 camera. “The K-24 is much smaller and did not have handles,” this user wrote. “The K-24 was also meant to be used remotely and did not have a viewfinder.”

Seeing a person holding this massive camera and lens looks kinda surreal. As I said, it’s not only huge in dimensions, but it also weighed incredibly much. Funnily enough, it was possible to use it handheld:

“While these cameras were normally clamped into mounts, a pair of handles and a viewfinder could be fitted to K-17’s and K-18’s for hand-held operation. What “hand-held” meant is subject to interpretation, as these cameras were not lightweights. With a 200 foot roll of film, the A-5 film magazine used with the K-17 weighed 30 pounds. A complete K-17 with 12″ lens cone and a full magazine weighed about 55 pounds. With a 24″ lens instead of the 12″, the weight climbed to near 75 pounds.”

After seeing and reading this, I’ll never complain again that my Sigma 18-35mm lens is heavy. Thankfully, we’ve come a long way in aerial imaging, and nowadays you can cram a camera into a hummingbird-sized drone.

How To Build A Super Sturdy Tripod for 30 Pounds

« Instagram finally allows keyword search, but there’s a catch
This underwater drone can live stream video at up to 574 feet below the surface »