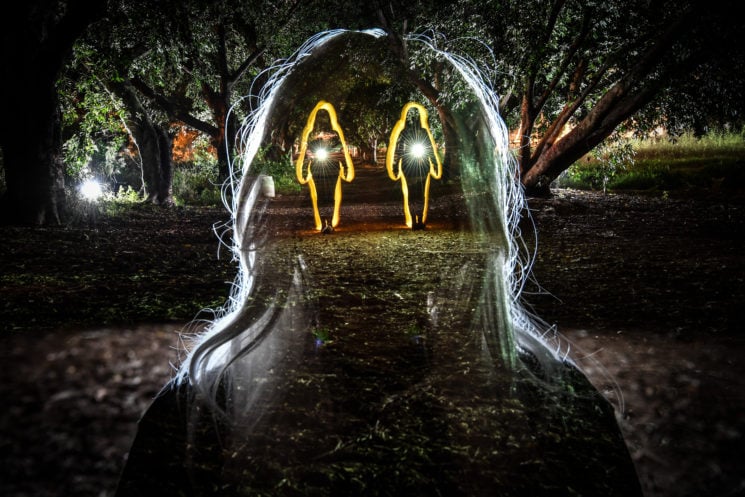 Sometimes you’re scrolling on social media and an image just makes you stop and go back to have another look. You scratch your head, trying to figure out how they shot it. Must be Photoshop magic you think. You read the caption “taken in one exposure” and think ‘wait, what?’ That’s exactly what happened when we saw this incredible image titled WAKE UP by a group of light painting photographers who call themselves Sketchlight.

The group Sketchlight is a trio of photographers based in Israel. Ray Vagner, Assaf Sofrin & Aria Geler have dedicated themselves to the technique of light painting in order to rediscover the aesthetics of contemporary art photography emphasising analogue, manual and low-tech techniques that have their origins in the early days of photography.

Ray Vagner explains that she is a “massive fan” of silhouettes within silhouettes and the inspiration for this image came from work by other light painters that she’d seen such as Tim Gamble, Chris Thompson, Jason D. Page, and Eric Pare.

As you can imagine, considerable thought and time went into the creation of this image, and Sketchlight explained precisely how it was done.

First, they needed a suitably dark and moody spot to shoot at. After they had found the location, they needed to work out the best settings and light positioning to achieve the desired exposure. One of the important and most rewarding aspects of this work is the teamwork involved in order to create these types of images in-camera with no photoshop involved. To make this image they had one photographer on the camera, and 2 photographers on the manually activated lighting, who also led and directed the model.

“At first, we positioned the camera on a tripod towards the avenue of trees,” Ray says. “Then we placed our model on a chair very close to the camera for the head part. We marked the exact position to place the model remotely in the background to get an exact location for the eye shape. We marked two points and memorized their focus ranges from the lens’ focus distance meter. We began the exposure at this point locking it open using a wired remote and the camera on bulb mode.”

To create the silhouette of the head close to the camera they flashed once with a Godox (Flashpoint) Flash AD 200 behind the head of the model. Then the model got up and moved to the first pre-marked position to create the shape of the first ‘eye’. During the time of the transition of the model from place to place, they covered the lens with a black card to block unnecessary light entry. When she stood on her mark, the photographers changed the focus manually to the distance they had memorized.

The team created each ‘eye’ by backlighting the model. They used an EL wire light in a yellow colour which they moved along and behind the model to create a smoky silhouette. When the model moved to the point of the second eye, the silhouette black area of ​​the model of the first eye actually gets more light and the figure becomes transparent. Creating the pupil of each eye was mainly don’t through trial and error. “We memorized the right height and we used a small and simple flashlight directed straight into the camera,” Ray says, “that created a star shape flare.”

The trees were backlit by handholding a Godox AD200 and moving quickly along the line of trees, flashing each one individually. For this image, the flash went off approximately 6 times. The exposure was then turned off taking 169 seconds in total.

Sketchlight told us that the process “involved trial and error to find what would work and to successfully get it right in one long single attempt. This one frame took us well over an hour to complete.”

The image was shot on a Nikon D5 with the following settings: 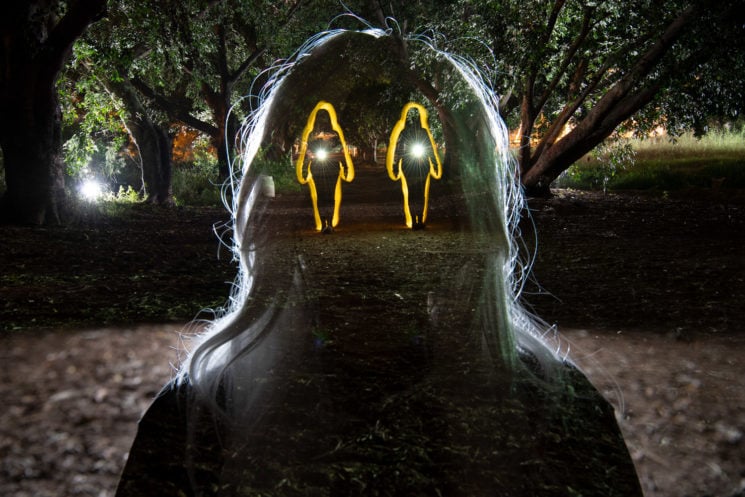 You can see from the RAW image above that nothing was done in post, the image was created entirely in real-time in one photographic frame. I’m sure everyone will agree that this is absolutely incredible teamwork and will inspire many people to go out and try creative light painting.