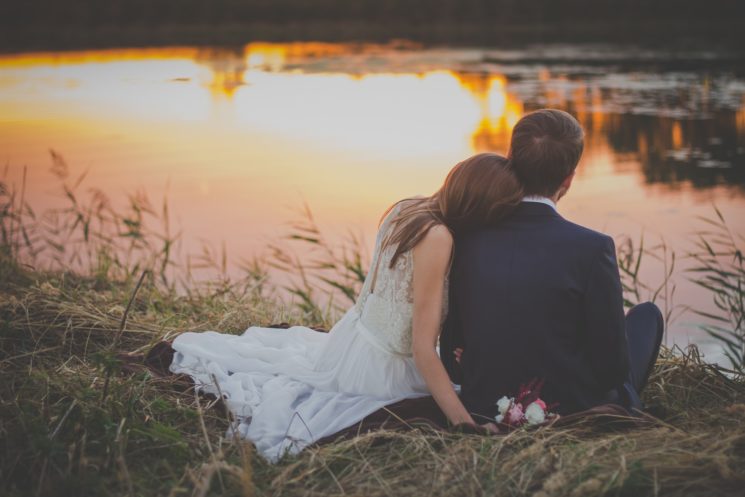 Photographer Hugh Lloyd recently had his gear stolen at Rome Ciampino airport in Italy. And as if it weren’t bad enough, in his gear bag there were memory cards with all the photos of his friends’ wedding. The distressed couple has made a public plea to the thieves to at least return the memory cards, and they’re hoping that it will reach whoever took the camera with the cards.

Jade Metherell and Eddie Simpson got married in a rustic ceremony in North Yorkshire, UK. Their friends and family flew to the wedding from as far as the Far East, California and Canada. The photographer, Hugh Lloyd, is a close friend of the couple. He was in charge of taking photos of their special day, and as Jade told the Daily Mail, he had captured many moments of them before the wedding.

On the wedding day, Hugh was taking photos throughout the entire day. Jade explained that he photographed all the way through the ceremony, drinks reception, outside photos, speeches, wedding breakfast and first dance. “It was a solid 15 hours before he eventually put the camera down and finally got a drink,” she told the Daily Mail. In other words – there were a lot of images.

A few days after the wedding, Hugh flew to Rome, where his gear bag was stolen. When he told this to Jade and Eddie, at first they thought that he was joking. But sadly, it was true – his gear bad was gone, along with all the photos of their big day. Hugh said that the statement was made after the robbery, but “it sounded like the Italian officials appeared to not show much interest.”

Jade explained that Hugh was tricked by a passerby asking for directions, while another person snatched his camera bag while he was distracted. Just like the couple, the photographer was distressed as well. Realizing that he was left without his gear and the photos, he appealed to his friends to share photos of the wedding with him. Considering that he hadn’t backed up his photos before he was robbed, this was the only way for him to put together an album for Jade and Eddie. 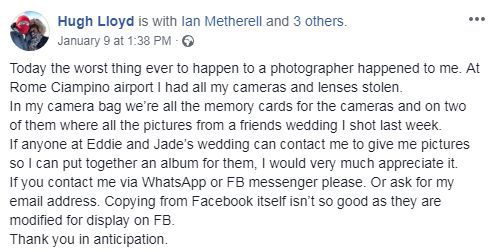 Fortunately, the couple has some good photos of the wedding taken by their friends. Still, they don’t cover nearly as many important moments as Hugh’s collection. They are hoping that the message will somehow reach Italy and the thieves who stole the cameras and that they’ll at least return the memory cards. But personally, I believe that the chances for this are slim. If someone is rotten enough to steal, I don’t think they care about other people’s feelings and memories.

Personally, I also hope for the miracle and for the couple to have their photos back. But since miracles are rare, let this be a cautionary tale for you. Never ever leave your gear unattended. And back up your photos as soon as you possibly can.

Couple calls out photographer for vanishing with their wedding photos