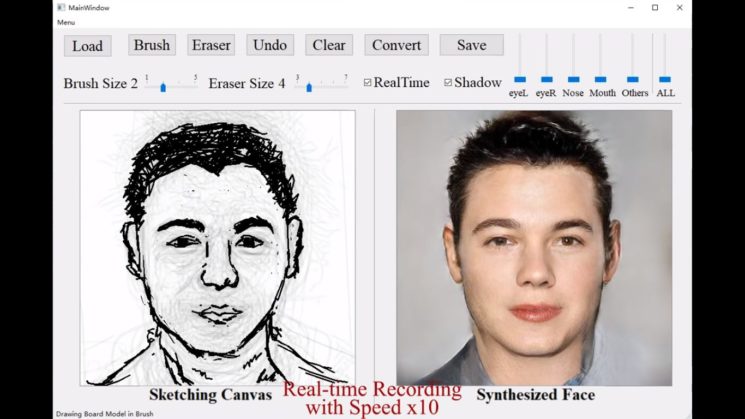 Artificial intelligence keeps getting better. A group of scientists from China has developed an algorithm that can turn sketches into realistic portraits. It even works with pretty rough sketches, and the end results look very close to real photos of people.

The algorithm was developed by the Institute of Computing Technology of the Chinese Academy of Sciences and City University of Hong Kong. In the paper, the group of five scientists explained the principles behind this technology. They point out that there have been similar attempts before. However, their algorithm provides more accurate results than other techniques invented so far.

“We first learn feature embeddings of key face components, and push corresponding parts of input sketches towards underlying component manifolds defined by the feature vectors of face component samples. We also propose another deep neural network to learn the mapping from the embedded component features to realistic images with multi-channel feature maps as intermediate results to improve the information flow. Our method essentially uses input sketches as soft constraints and is thus able to produce high-quality face images even from rough and/or incomplete sketches.”

The scientists point out that the tool is not only accurate but also easy to use, even for non-artists. Judging from the example video, the results are quite impressive. Take a look:

There are two possible applications of the technology proposed in the paper. They include face morphing and copying and pasting of facial features. However, what I first had in mind were police sketch artists. This tech could help them create more realistic portraits from rough sketches based on a description. I guess that it could also be useful to all kinds of designers, especially game designers. Either way, I’m sure that this technology will have its applications, and for me, it’s interesting enough to see that something like this even exists.

« Photographer regrets buying this gear; what are your regrets?
How to turn GIMP into Photoshop (sort of) using PhotoGIMP »