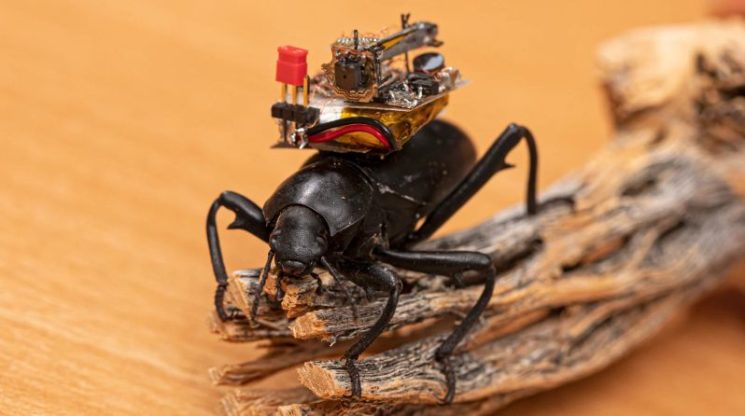 We’ve seen some pretty tiny spy cameras so far, and scientists keep pushing the limits. Researchers from the University of Washington have developed a camera that’s so tiny, that it looks like a backpack for beetles. If you’ve ever wanted to see the world from a bug’s perspective, now you can.

Now, this lil’ camera can’t literally turn you into a “fly on the wall,” as it’s still too large for flies. Still, scientists relied on a fly’s view of the world, as the camera mimics their large compound eyes. Insects like death-feigning beetle and a Pinacate beetle carried the 250 mg camera without any trouble, even while climbing a tree.

As you can probably imagine, this camera isn’t something that you’d use to film a Hollywood blockbuster. It films black and white low-res footage at only 5fps. The lens can be pivoted about 60 degrees to each side for an expanded field of view. The footage from the camera is streamed to a smartphone via Bluetooth at a very modest range of maximum 120 m (~390 ft).

Despite the limited streaming and image quality capabilities, the battery life of the beetle camera is pretty impressive. It can run for up to two hours if streaming constantly. But scientists managed to but to extend it to over six hours thanks to an accelerometer. It’s set so that the camera only streams when the beetle is moving.

If you’ve ever imagined yourself being as tiny as a bug so you could spy on someone… Well with this camera you kinda could, and that’s one of the concerns considering how miniature it is. This is why the researchers have decided to go public with their invention rather than secretly sell it to military or law enforcement. But of course, there are other interesting applications of this beetle camera backpack. It could give entomologists lots of new knowledge about insects, how they view the world, and how they interact with it and with each other.

You can view the entire paper and read more about this tiny camera backpack here. How would you use it if you had one?