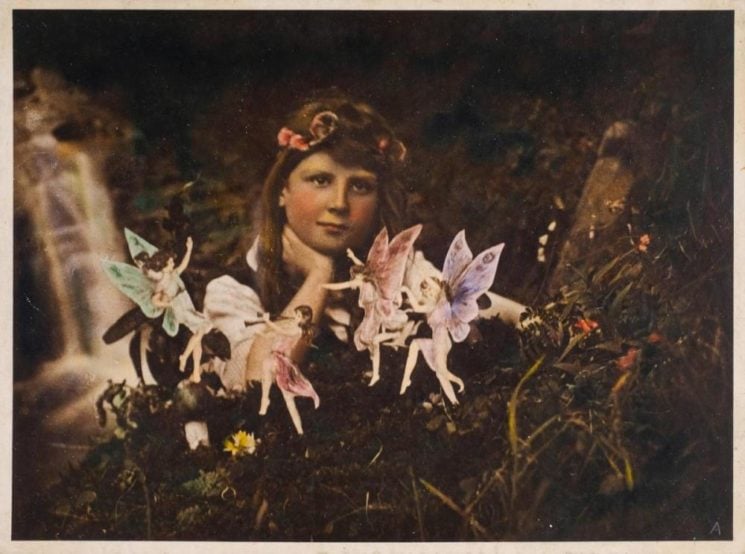 I recently watched a movie with my kids about the Cottingley Fairies.  The film was a bit of a snoozer but it was my introduction to the true story of two little girls who, between 1917 and 1920 took beautiful b&w glass plate photographs of one another interacting with fairies in the forest behind their home in Cottingley, England.

A century later, we don’t give a second thought to any notion that what these children photographed were real elfin creatures.  Yet in the early 20th century, with photography and scientific culture in its infancy, the five photographs that the young girls took were under serious investigation by the entire world.  The case would become a fulcrum on which questions of science and faith were levered.

Imagine living in a time that was innocent enough to believe not only in fairies but in the stories of children.  If fairies did exist and a 21st century little girl were to take a photo of them on her iPhone, the story wouldn’t even gain enough traction to be formally investigated.  The images would be written-off as forgeries quicker than they could be backed up to The Cloud and forgotten about.

Elsie Wright and Frances Griffiths were only 16 and 9 years old respectively when they started a childhood prank that would become a focus point for the rest of their lives.  In response to being told to come inside from a day of play in the back yard, the two cousins concocted a story that they didn’t want to leave the fairies with whom they’d been playing.  When Elsie’s parents did not believe them, they were determined to prove their story.  And eventually, even the author of the Sherlock Holmes mystery books, Sir Author Conan Doyle, was unable to discern their fiction from fact and championed the story in a series of articles and a book. 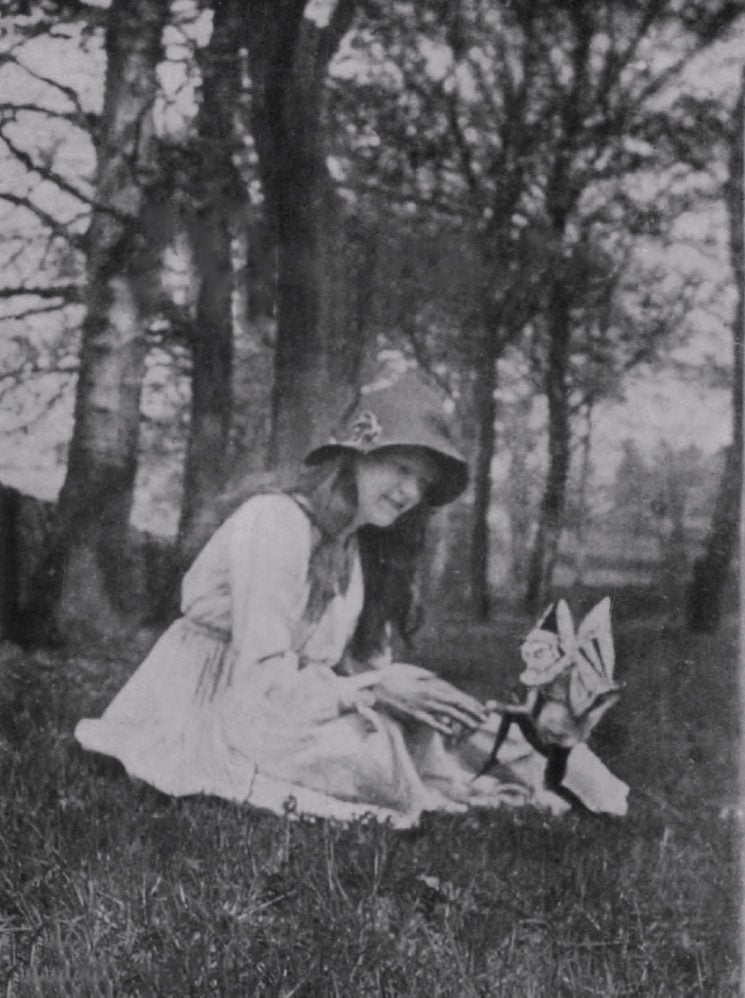 Arthur Wright, Elsie’s father was an amateur photographer.  He had a small darkroom and an interesting German glass plate camera by W. Butchers & Sons called Midg, Model No.C150917 which was designed in 1902.  Armed with the Midg, Elsie and Frances would produce their first two fairy photos sans adult guidance.

The Midg is a glass plate box camera that was loaded with twelve 4.25″x 3.25″ glass plates.  After the glass plate behind the taking lens was exposed, it would fall into the bottom of the camera, allowing the next plate to move into place for another shot.  The plate format is known as “quarter plate” and the advance mechanism of this camera is known as “falling plate” or “drop plate.”  The camera featured other quirks such as an exterior aperture diaphragm, a single element lens and ability to select from a reasonable compliment of apertures and shutter speeds.  Did the Midg also have the ability to photograph the supernatural?

In attempt to produce more evidence of the existence of fairies, a member of the Theosophical Society of Bedford furnished the girls with two, newer, higher quality, W. Butcher & Sons Cameo quarter plate folding cameras (the old Wikipedia entry here said they were Kodak cameras but I found that they were actually Butcher & Sons again and corrected the entry!) and a set of secretly marked plates, with intent for Sir Author Conan Doyle to publish the resulting images.

The Cameo is a more common camera type of the same glass quarter plate format as the Midg.  It even provides the same shutter speed settings of 25, 50, 100 and T and B, as well as aperture range of f8 to f32.  The difference is that it is a bellows rather than a box camera which facilitates more accurate focusing and plates could only be loaded in one at a time.  Additionally, it features a U.S. made, multi-element Wollensak lens.  I can’t find record of why this specific camera was chosen for the girls but wonder if the idea was to give them something they’d already understand how to use (same shutter speeds and apertures) but could provide higher quality images and didn’t contain the falling plate mechanism which, I don’t know, could maybe be used to fake the fairy images somehow?  In any case, the girls squeezed off three more, somewhat less innocently motivated images.  Notice that, unlike the first two photos, the final three were dubbed with titles! 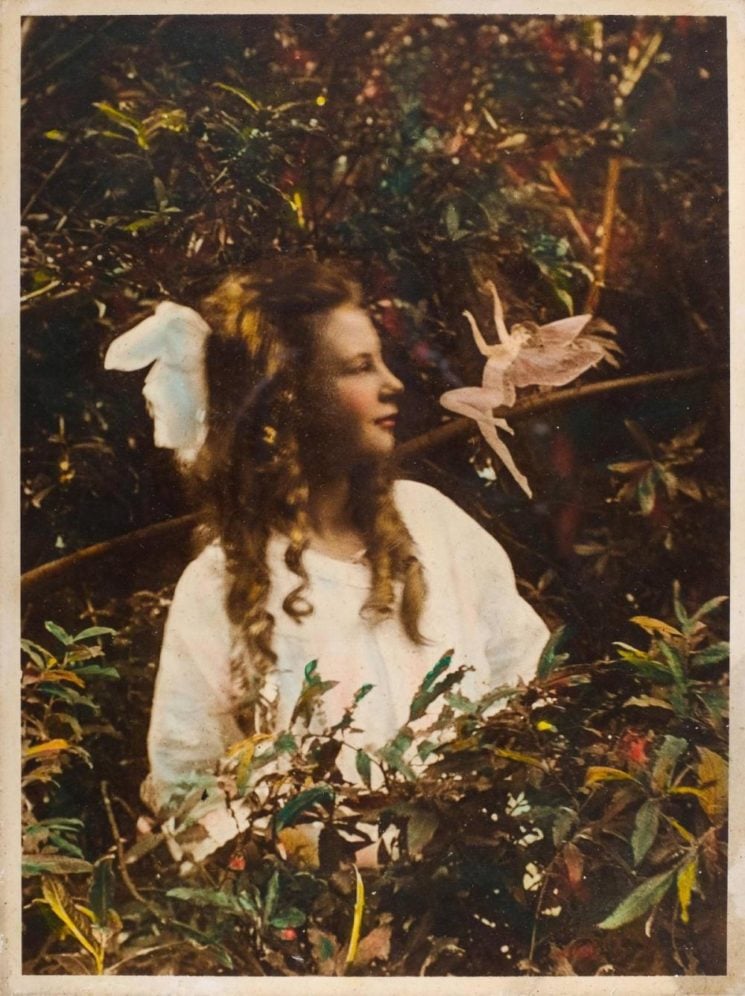 As they were taken, just five shots over the course of three years, Elsie and Frances’ whimsical and serene photographs inspired hope and optimism all across post-World War England.  The girls and their story captured the imaginations of the likes of Houdini and countless others.  Numerous articles were written, scientific examinations of the photos were conducted and fanciful conclusions about the very nature of reality were drawn.  Kodak and Ilford both examined and discredited the photos but the genie was already out of the bottle in the public mind.  There was controversy and there were critics but that the story and images had any traction at all, much less the amount that they did, is absolutely stunning.  To me, this story ranks up there with audiences running from the screen in terror during initial screenings of Arrival of a Train and the belief that a real Martian invasion was occurring during Orson Welle’s broadcast of War of the Worlds.  And perhaps like these famous mass illusions, credit is largely due to the skillful execution of the art itself. 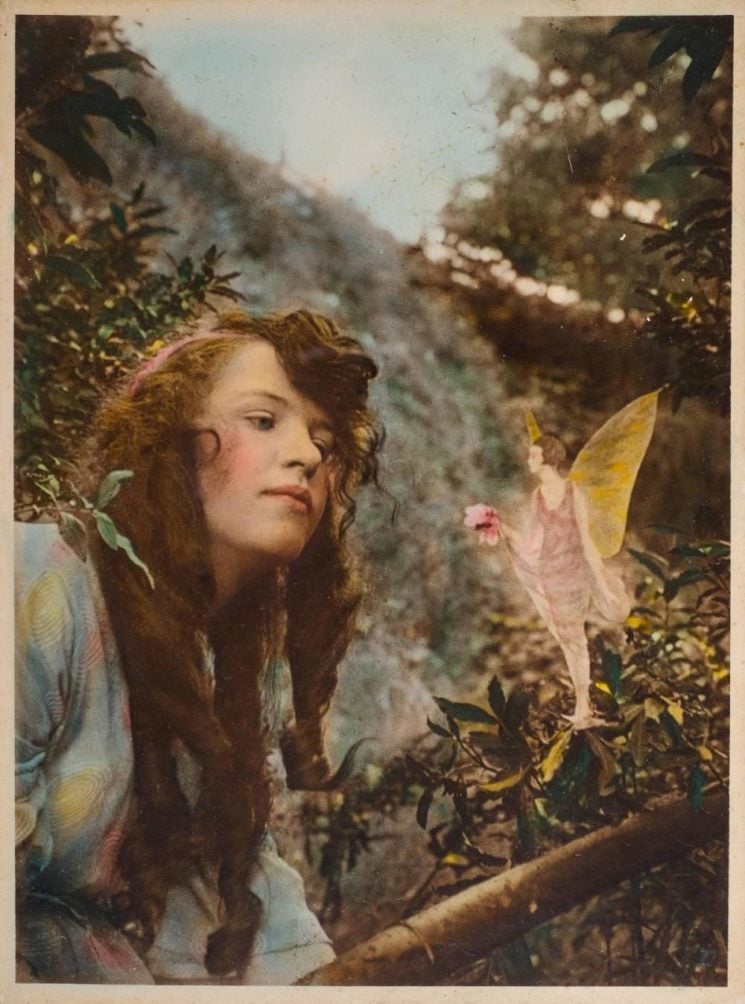 Originally shot in b&w, it is rumored that Elsie herself produced the colorized prints that I’ve chosen to display here (a colorized version of Photo #2 has not surfaced to my knowledge).  The colorized prints are quite rare, however, and little about them is known.  I’m a b&w guy but am smitten by the added coloring.  Not only are the soft, muted tones visually compelling, à la Ellen Rogers, but I believe they take the Cottingley Fairies to storybook-level mythology.

Occasionally, vintage prints from the original glass plates turn up at auction and sell for princely sums.  Despite being incomplete, the four original hand-tinted prints pictured here sold at auction this past April for nearly $31,000 USD.  I found a vintage silver gelatin print of a Photo #4 on eBay for over $3,300 USD.

Elsie’s father’s falling plate box camera and one of the Cameo folding cameras was sold by Elsie herself in 1972 through auction at Sotheby’s.  They are both currently on display at the National Science and Media Museum.  The second Cameo camera sold at auction this past April for over $4,000 USD. 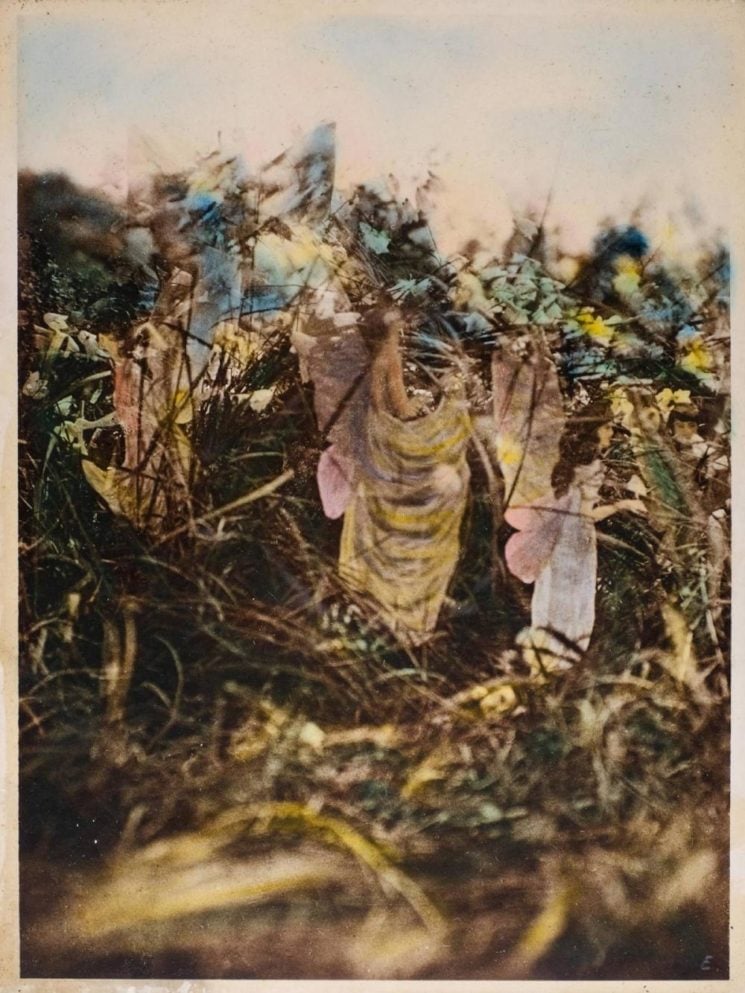 And despite decades of rock-solid claims and playful variations of statements, in 1983 an elderly Elsie Wright and Frances Griffiths finally admitted that the whole thing was a hoax.  The fairy friends depicted in their famous five photos were simple paper cut-out’s from Princess Mary’s Gift Book, on which wings were added and hatpins used for support.  But both ladies, prior to their deaths continued to state that, though their photographs were fake, they really did see fairies.

But regardless of if you believe in fairies or not, I think we all have to applaud these young ladies’ photographic skills and creative vision.  And for putting one over on all the adults!  Using an all manual camera, they managed to squeeze off some well-exposed, well focused photographs that made people question human perception of time and space.  What technical flaws they exhibit only lent that much more credulity to the girls’ story, and a Blair Witch-type aesthetic to the images.

And maybe that’s the real takeaway from the story.  We will make the world what we want to believe that it is.  And photography is a critical part of that mission.

Johnny Martyr is a premier East Coast film photographer. After an adventurous 15 year photographic journey he now shoots exclusively on b&w 35mm film that he painstakingly hand-processes & digitizes. Choosing to work with only a select few clients per annum, Martyr’s uncommonly personalized process ensures unsurpassed quality as well as stylish, natural & timeless imagery that will endure for decades. You can check Martyr’s work on his website and Flickr stream, and also follow him on his Facebook page. This article was also published here and shared with permission.