Joker has been one of the biggest movies over the last couple of years, taking home both the best actor and best original score Oscars. But one of the things the movie is also well known for is its lighting. The movie uses a lot of blues and oranges, which is actually pretty common these days, but it does it in a somewhat unique way.

In this video, the A-Team takes a look at how you can recreate the lighting in Joker practically, using gels instead of grading in post, with both higher-end gear as well as low budget options.

The first lighting setup is using some pretty expensive gear. In fact, a couple of the lights don’t actually seem to exist yet – like the Aputure 300X and Nova 300C lights, first shown off at IBC last year. The Nova 300C is an RGBWW LED panel that offers a bunch of different effects. This light was the first to be placed as a blue-tone key light on the subject, simulating a flickering TV. 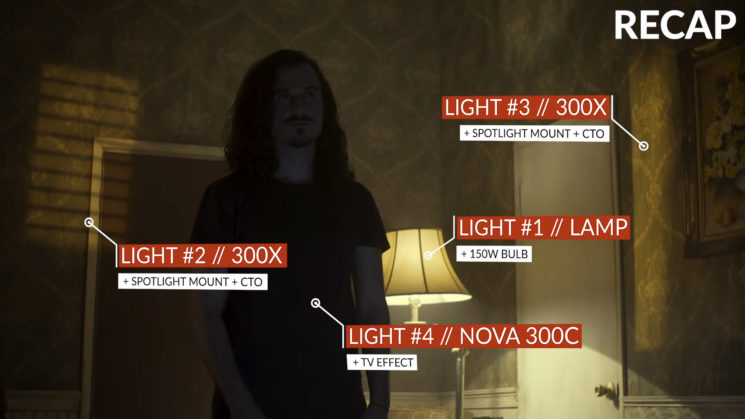 The TV flickering light simulator is on here, but it was caught in one of is dim moments

One 300X was used with the Aputure spotlight attachment and a gobo to project the image of blinds on a window onto a well. This was set to tungsten white balance but it wasn’t quite orange enough, so they added another orange gel.  The same setup was replicated outside of a fake window (no gobo this time) in order to project another window opening onto a different wall.

Finally, a practical lamp was also used in the scene. Practical lights feature highly in Joker, with one appearing in many of the scenes. The team did, however, swap out the bulb for a 150W tungsten on a dimmer. This allowed them to get some level of control over the exposure to match with the rest of the shot.

The second setup shows how a similar look can be achieved with lower budget lights. The only real difference in the setup here is that there’s only one light projecting onto one of the walls. 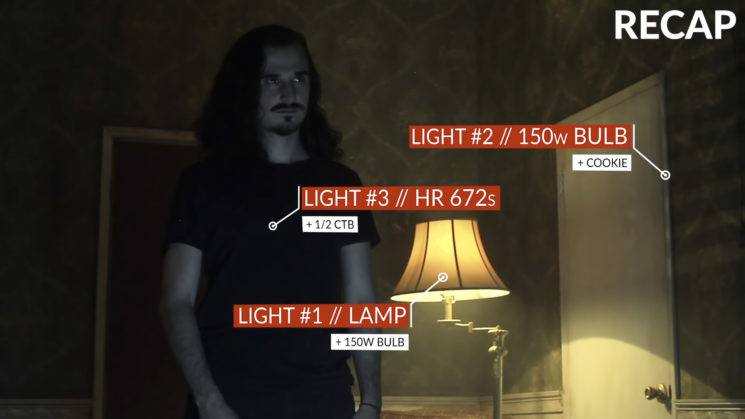 The effect of the TV light here is much more obvious, but instead of using an RGBWW light with a flickering effect, the Aputure HR672s LED panel was used. Although it’s a daylight bulb, the team felt it wasn’t quite blue enough, so a blue gel was added. This light doesn’t have any effects, so you’d need a crew member just out of shot to manually adjust the brightness for your clip if you’re shooting video. If you’re shooting stills, then you don’t need the flickering effect and just need to balance the brightness for your exposure. 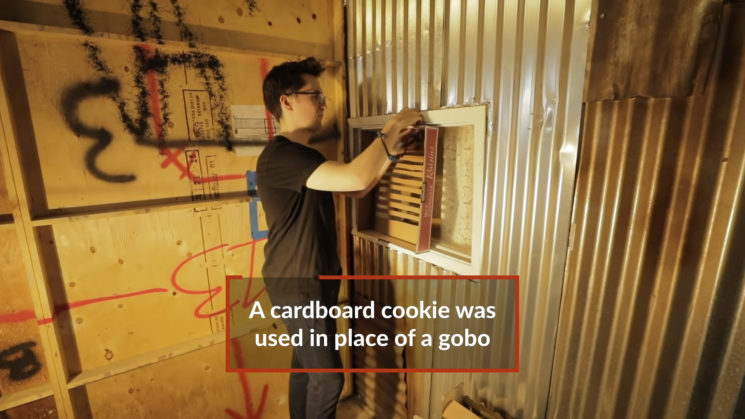 The Aputure C300x outside the window has been replaced by a simple tungsten work light with the reflector removed and a cardboard cookie placed over the window to project the effect of blinds on the wall. When you look at the two side-by-side, there are obvious differences in what’s projected onto the walls, but the two are both pretty close.

I think I might actually prefer the overall look of the lower budget lighting. What do you think?