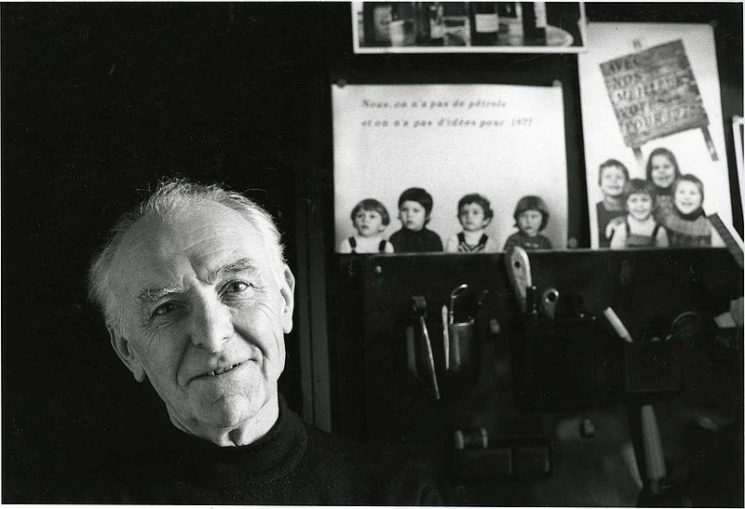 Robert Doisneau is famous for one of the most romantic images of the 20th century, Le baiser de l’hôtel de ville (Kiss by the Hôtel de Ville). But, his work goes way beyond this iconic photo and it’s filled with humor and soul. In this video, Martin Kaninsky of YFM Street Photography will tell you the story of Robert Doisneau, who was considered a champion of humanist photography.

Doisneau was born on 14 April 1912 in France. Both his parents died when he was very young, so he was raised by his aunt. He came into contact with art around the age of 13, but he took up amateur photography when he was 16. Reportedly he was so shy that he started by photographing cobble-stones.

After working on several jobs as a photographer, in 1934 Doisneau began working at the Renault car factory in Boulogne-Billancourt. I find it interesting that he was reportedly fired because he was constantly late (probably because I can relate). Many years later, he said that the years of working at Renault marked “the beginning of his career as a photographer and the end of his youth.”

Doisneau worked with the Rapho agency, taking street photos for them. He was involved in the Second World War both as a soldier and a photographer. He was in the army from the beginning of the war until 1940. But until the end of the war, he used his skills to forge passports and identification papers for the French Resistance.

After the war, Doisneau returned to freelance photography, and his most memorable images were taken during this period. He sold photos to Life and other magazines, and he received an invitation from Henri Cartier-Bresson to join Magnum Photos, However, he turned it down and rejoined the Rapho agency in 1946, remaining with them throughout his entire career.

Doisneau’s images were often humorous and ironic. However, he never ridiculed his subjects. He would say, “I don’t photograph life as it is, but life as I would like it to be.” In my opinion, his images reflect his personality, or at least what we know about him. His shyness is something that’s often mentioned, and I can almost feel it through his images. Doisneau’s shyness brings us to his most famous photo, Kiss by the Hôtel de Ville.

The Kiss shows a couple kissing in a busy street in Paris. Doisneau took it in 1950. Although it seems as if it were a moment spotted and captured in an instant, it was actually staged. Doisneau made this public in 1992, when the photo took him to court. He was sued by Jean and Denise Lavergne, who alleged that he took their photo without their permission. Doisneau revealed that it wasn’t them in the photo, because the kissing couple actually gave him  permission.

But what does it have to do with shyness? Well, the thing is that Doisneau spotted the kissing couple in the street, but he was too shy to photograph them during this intimate moment. He approached them later and asked them to repeat the kiss, and they agreed. In 1992 Doisneau said: “I would never have dared to photograph people like that. Lovers kissing in the street, those couples are rarely legitimate.”

Over his career, Doisneau published dozens of books, his work was displayed at many exhibitions and he received multiple awards for his work. He died in 1994 and was buried in the cemetery at Raizeux beside his wife Pierrette.