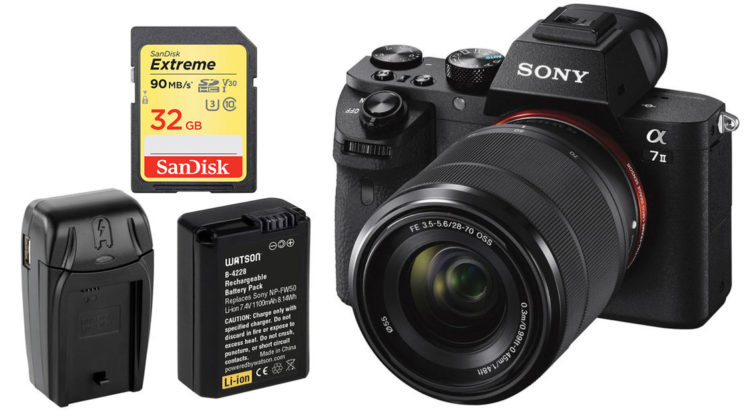 The Sony A7II & 28-70mm kit is currently on massive discount at B&H. They’ve dropped the price from the A7II kit’s regular $1,598 down to a mere $998. That’s almost a 40% discount. But it’s not just the camer and lens. The kit also comes with a 32GB 90MB/sec SanDisk Extreme memory card, a spare battery and an external charger.

Since the release of the Sony A7III, it’s easy to imagine that Sony A7II sales have dipped somewhat. And I guess sometimes you just need to free up space in the warehouse, especially when there’s a whole new flurry of recently released cameras like the Nikon Z6 & Z7, Canon EOS R, Blackmagic Pocket Cinema Camera 4K coming in, plus whatever the Panasonic, Leica & Sigma alliance will produce in a few months.

But the Sony A7II is still a pretty kickass camera. And when you consider the kind of money that even 10-year-old used full-frame DSLRs like the Nikon D700 and Canon 5D Mark II are still fetching, this is an absolute steal of a price for a brand new full-frame mirrorless with a 28-70mm lens.

Again, the Sony A7II & 28-70mm kit regular $1,598 price is currently down to only $998. B&H hasn’t told us when this sale will expire yet. So, it may just be a “while stocks last” thing. If that’s the case then you definitely won’t want to wait. They won’t last long at this price.

Sony’s “Step Up to Sony” summer sale offers up to $1,000 instant rebate savings

« Yongnuo’s new Android-powered mirrorless camera is Micro Four Thirds with an EF mount
Gear really doesn’t matter, its all about the story »