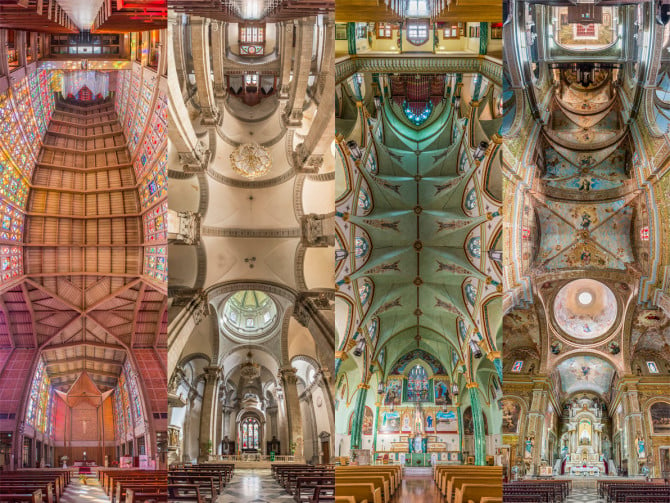 Anybody who has visited one of the grandiose churches or cathedrals has come across this problem; how do you photograph the sheer size and magnificence of this holy architecture?

If you capture the chancel, you miss out on the ceiling murals. Try photographing the murals and you’ll probably be giving up on most of the stained glass.

One way to capture as much as possible would be a 360-degree panorama but that will result in a very distorted imaged with some of the most impressive features of the building – the ceiling, murals and unique lighting fixtures, left out of the frame.

Obviously such detail-filled gargantuan structures require an out-of-the-box solution, and this is where travel photographer Richard Silver (previously) and his vertical panoramas come into play.

Richard begins by finding the perfect spot in the center aisle and then he shoots 6-10 photos from the pew, through the ceiling and all the way to the back of the church.

Next, he merges the photos in Photoshop to receive vertical panoramas, with a perspective unique to this style of architecture.

The high-ISO capabilities and wide apertures are important as some churches do not allow tripods. In this case Richards bumps the ISO to the 1600-2000 range.

Despite the low light locations and the occasional tripod ban, Richard told DIYP that the hardest part in capturing these vertical panoramas are the church’s rules and availability:

“Quite often I am not even allowed to take photos inside the church, I respect that rule. Many times the church is closed when I get there or only open for services on Sundays. But, sometimes I try and set my tripod up quickly and quietly when I am allowed in to take photos. Sometimes it works, sometimes not… The real hardest thing about shooting churches are if they are open, too many are closed with no real set hours of operation”.

Richard recalls favorably of two churches in New York and one in India where the pastors had opened up specifically for him to take photos, saying “It was an extremely nice gesture and effort on their part”.

Our Lady of Guadalupe at St. Bernard, New York, USA

Being a travel photographer, Richard, whose times slices have previously been featured on DIYP, is constantly visited new locations around the world. Once he has planned which country he will go to next, he does his research to see which churches in the area are worth visiting.

With no plans to stop travelling anytime soon, you can expect to see more of these awesome vertical panoramas, as well as great “regular” photos, on Richard’s website, Facebook page or Instagram.