Portable power has become a big deal over the last few years as more photographers and filmmakers are discovering the joy of getting out of the studio and shooting on location. And thanks to new battery tech, gone are the days of noisy generators (for some of us anyway).

This one from Omnicharge, though, definitely ranks up there amongst the beefiest I’ve seen, though. It’s the Omni Off-Grid Power Station and it’s an absolute monster, capable of delivering up to 1500 Watts of continuous power. As with previous Omnicharge products, like the “Ultimate” (review here), the new Off-Grid Power Station is being funded through IndieGoGo.

The Omni Off-Grid Power Station offers some of the most versatile power output connectivity options I’ve ever seen in a portable power bank. It has four Type-C USB ports capable of delivering up to 100 Watts (200W combined for all four, though, so keep that in mind), four Type-A USB ports supporting 18W QC3, a 12v DC car socket, as well as four AC outlets capable of delivering up to 1500W of continuous power.

There are also three other sockets on the back of the unit allowing for three different options to charge it back up. There are XT60 and Anderson connectors that allow you to send in a 400W signal from solar panels or there’s an Aviation socket which can work as both an input to charge from AC or output at up to 300W. The Type-C USB sockets can also act as a 100W charging port to bring your Omni OGPS back up to full power.

The AC outlets shown in the campaign and its associated imagery are 110v, but there will also be a 230v outlet for customers outside of the USA with a multi-plug configuration that should accept just about any type of plug from anywhere in the world.

Although the Omni Off-Grid Power Station offers up to 1500 Watts of maximum output, the battery contained within is 1500Wh capacity. So, if you’re running it at full load, it’s only going to last for around an hour. Fortunately, most devices don’t use anywhere near 1500 Watts of continuous power. For some typical benchmarks, you’ll get up to 20 charges for your laptop or drone batteries and potentially over 100 charges of your smartphone.

But it also means you can run some continuous devices, too, like LED Panels for shooting video. And you can run them silently, without any kind of emissions, too. This means that it’s not going to be picked up by the microphone (assuming you’re not draining enough juice for the cooling fan to kick in) and you can use it indoors – neither of which you can do with a petrol/gas-powered generator. 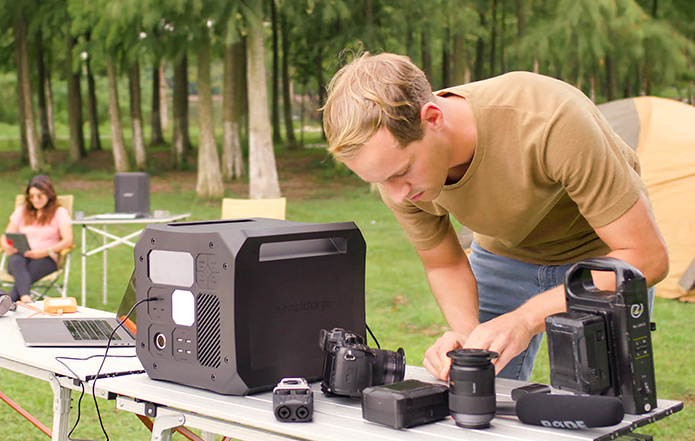 If a single Omni Off-Grid Power Station isn’t enough for you, there’s also an extended battery that you can plug into it to extend that power. The system also offers long-range communication options, too, using LoRA – a low-power wide-area network protocol. So, it doesn’t require any kind of 4G, WiFi or cloud network. Handy if you’re out in the middle of nowhere working with a team. 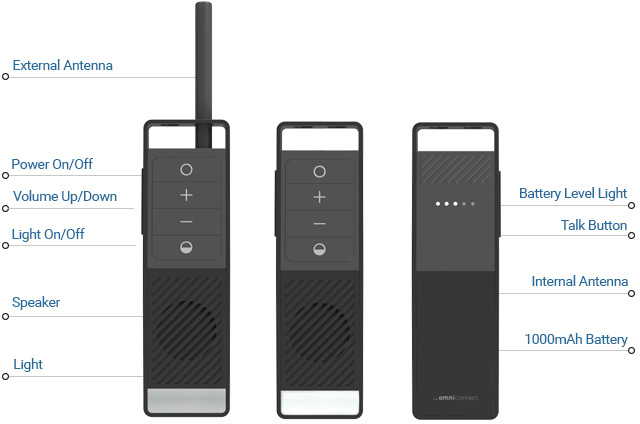 The units have a range of 8 kilometres, but the way LoRA works is that each device on it acts as a kind of relay, essentially creating a mesh network. This means that in the case of the Ominucharge Connect system, the range of communications can be extended up to cover a range of up to 50 kilometres. Everything can be monitored from a smartphone app, too, letting you see exactly how much power is being used, battery capacity, time remaining at the current rate, temperature, and so on, as well as private messaging for your team.

At the moment, Omni Off-Grid is still in the prototype stage, so all of the usual crowdfunding caveats apply. However, Omnicharge has successfully delivered three times in the past and produced some pretty awesome products. So, I look forward to seeing these become a reality. They’re not inexpensive, though (even at the Indiegogo prices).

You can find out more about the Omni Off-Grid Power Station on Indiegogo.

The Omnicharge Ultimate is a beast of portable AC, DTAP and USB power