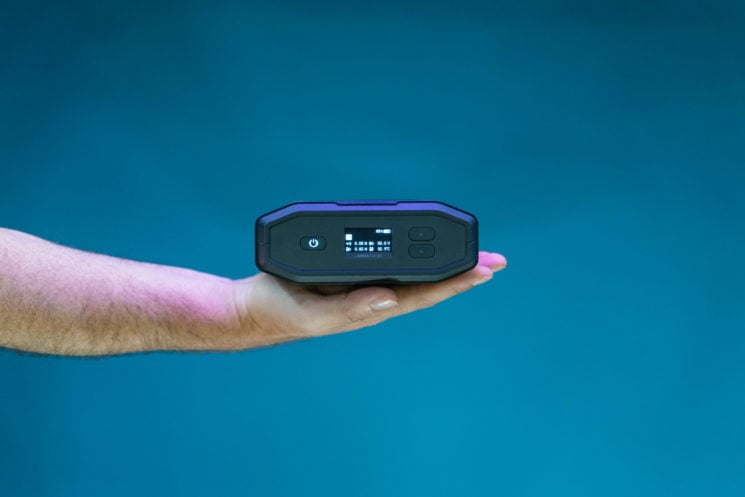 The Omnicharge Ultimate has a whopping capacity of 34,800mAh. This is a lot of juice. If you are looking for V-mount compatible, you’d be looking at about a 125Wh battery. But, I am jumping ahead of myself. Let’s start again.

The Omnicharge Ultimate is basically a power bank on steroids. It is similar to your 10,000mAh power bank that you carry everywhere because your phone battery gets nuked by midday. Only it is three and a half times as strong and features an AC outlet, a super-detailed LCD monitor, a variable DC output and a 3 USB ports.

We met with Omnicharge at NAB 2019 and we got a unit for testing. I gotta say. It’s an incredible piece of kit that is well thought out.

Let’s look at the specs:

The version that we got has a 120V US power outlet, but there is also a version with a European outlet at 230V. Watt rating is similar on both.  Since many of today’s devices use a multi-current power brick, I wish that the unit shipped with one of those universal sockets. Though, I see the safety benefit of having a dedicated socket per geography.

The unit feels very solid, it is made of an aluminum housing with a rubberized jacket. All the outlets have a rubber cap, to fend any stray water, but I will not dunk it in a water tank. 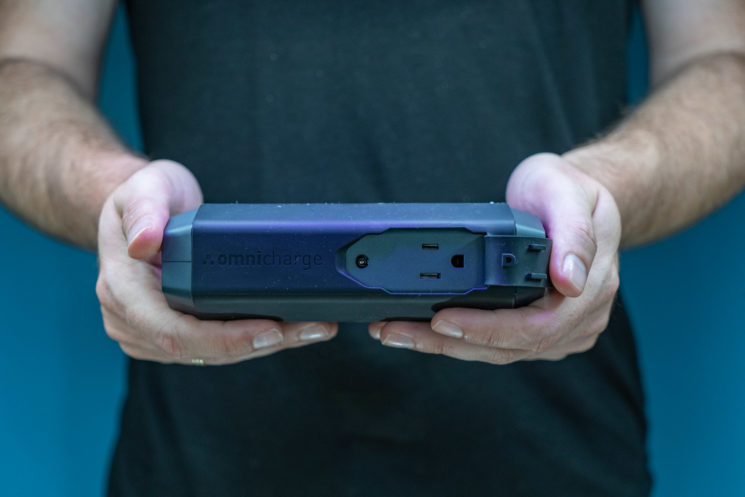 There is a small LCD and some buttons in the front which provide some interesting controls. Firstly, you can decide which power options you want active: USB, AC or both. I assume this help both with safety and with increasing battery time. Or even turning the unit off when it goes to storage. 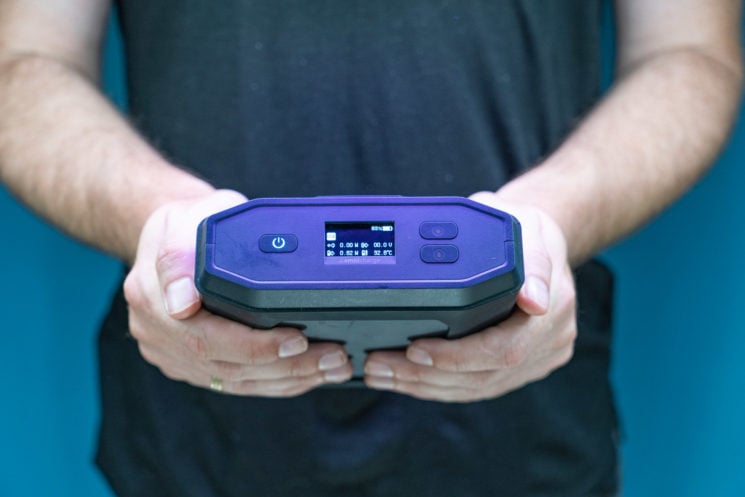 What will it do?

Well, pretty much anything that will fit it’s power and capacity rating. If you own a Mavic for example, it will give you two full battery loads (and then some). 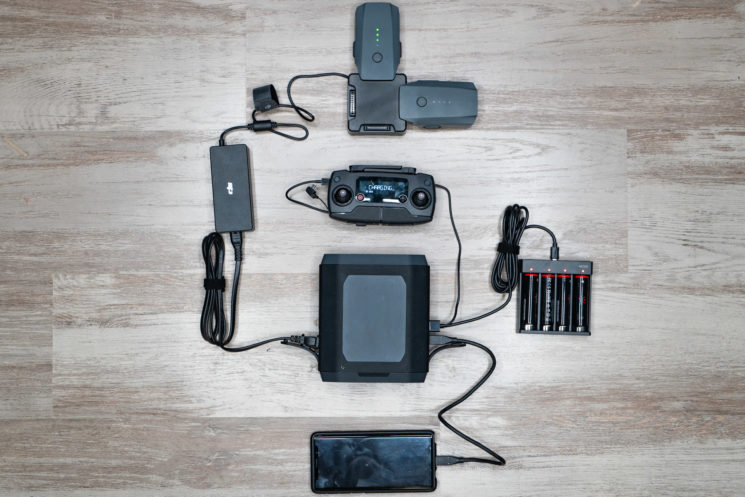 As we mentioned before, there is no shortage of outlets. There are two QC3.0 fast ports for phones or other gadgets, a USB-C with PD up to 60W for laptops, a MR30 plug (rant coming soon) and the awesome AC outlet which will take pretty much any charger, or even a small fridge if you go camping.

This plethora of ports means that you can use one unit as a single power source for a shoot. In our case, it was a full night timelapse, where the Omni powered a SYRP slider (two USB ports), an A7III (USB), and a small light (MR30 to DC jack). None stopped during the night.

One of the more interesting features (which was also present at the previous Omni 20 model), is the ability to control the output voltage on the DC outlet. Need NPF voltage? set it to 7.2; DTAP? set it to 14.4; Wanna power a Spekular light? no problem! set the unit to 24V. 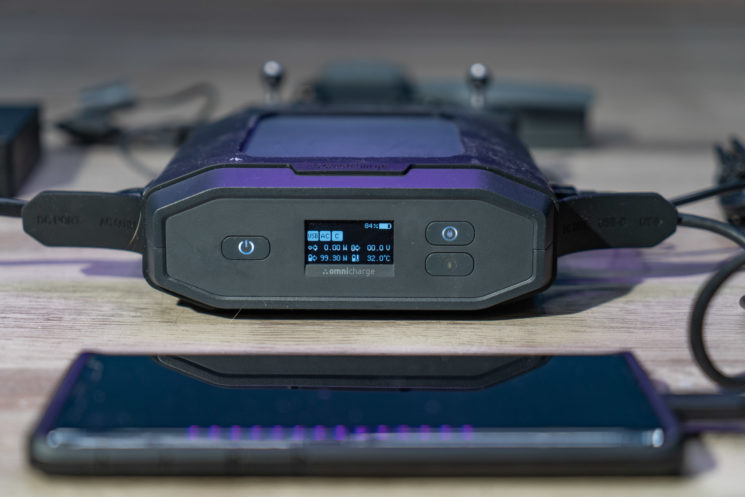 The fact that it provides 150W of continuous power means that you can power even demanding units. Interestingly, the AC output does not only supports 120W and we could not power a full Spekular star or an Aputure 120D using the AC outlet it. We were able to get almost two hours of light from our Godox SL60, though.

There is a way to swap batteries on the Omnicharge Ultimate. But it involves removing screws and some light handymanship. That would come in handy if you need more than 125W on a single trip. A tool-less operation would have been a nice feature, especially if you need a swap in the field. But I suspect that most customers would not use the extra battery feature, so I am not sure if it’s worth the engineering effort.

My only two caveats with the units were the supplied charger which goes up to 60W, while the Omni supports a 90W intake. It’s not bad per-se. The Omni charges completely in three hours using this charger which is good enough. but if you make a unit that supports a 90W intake, spoil us some more and give us the 90W charger :) Gotta say though, this is not really an issue, If they did not tell me about the 90W intake, I would have been perfectly happy with 60W.

The other thing, which is the only “Real” issue is the DC-out port. While it is not overly unique, it is not overly standard either, which means that you’ll have to get your fix from Omni. There is also no way to protect your device if you accidentally set the power on this port to a voltage higher than what you need. I talked with Omni at NAB and they are considering a DTAP connection as well.

The Omnicharge Ultimate finished it’s IndieGoGo campaign at November 2018 with a staggering $987,732 in backings. According to Omni, they are almost done shipping units to backers and I assume it will be available on Amazon and B&H shortly after the backers round is completed.

At a predicted price of $599 the Omnicharge Ultimate is not a tool for even the most demanding of smarphone users. It is a tool for pros or serious campers. If you got in on the kickstarter, you should be happy, at $399 it is a real bargain!

Since NAB, we have been using the Omni ultimate quite heavily and we could not be happier. It made several of our off-the-grid productions significantly easier.

« Some insight into the logistics of photographing a NASA rocket launch
This diagram shows the ultimate solution to the horizontal vs. vertical shooting debate »