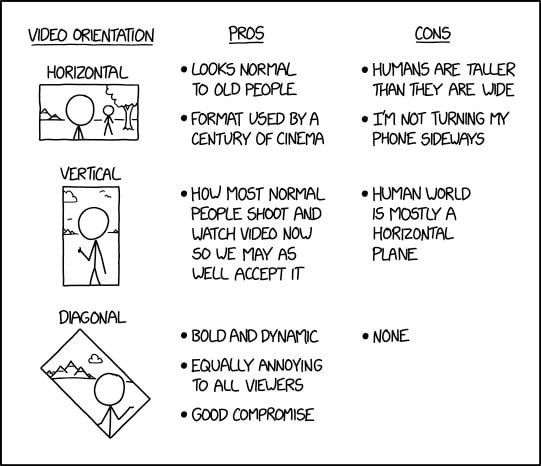 Vertical videos seem to be the future, whether we like it or not. It all started with Instagram and Snapchat, and even Arri and Samsung have joined the trend. However, the arguments against it are still strong and the debate between vertical and horizontal video seems never-ending at this point. But, a brilliant comic from xkcd seems to have the ultimate solution!

Sure, you can shoot horizontal, it’s a tradition and why would we change something that’s worked for so many decades. On the other hand, trends are changing, the world is changing, shouldn’t we adapt to the change? No matter which stance you take, you’ll annoy someone. Well, xkcd suggests that maybe we should shoot diagonal. Could it be “a good compromise?” I don’t know, but I bet that it would be “equally annoying to all viewers.”

The Great Photography Debate: Gain experience without giving yourself away for free

The never ending debate of Film vs Digital; Top DPs discuss the differences and evolution

This filter system is the ultimate variable ND solution