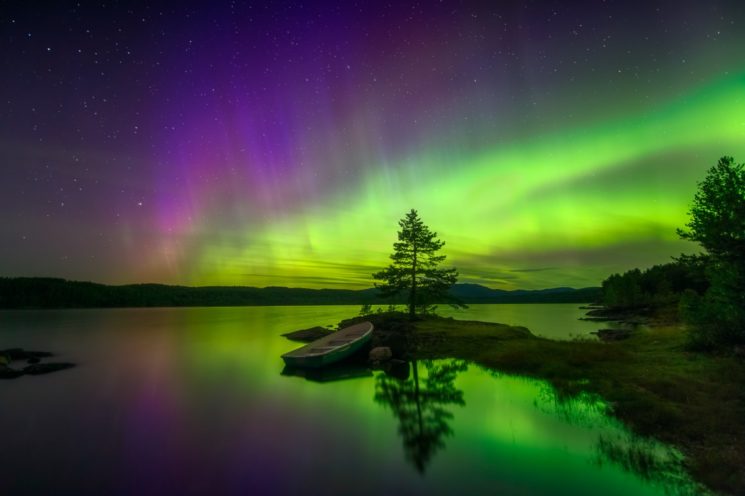 In December 2014 I decided that I wanted to practice shooting the night sky in order to expand my photography skills. Of course I made every possible mistake. My compositions were completely off, I severely underexposed or blew out the sky and the images were not sharp.

At the end of that month I headed out again determined to fix all my mistakes. I had learned that in order to nail my compositions it was wise to shoot a few seconds at highest possible iso and use those exposures to adjust my comp. When I examined my first shot from that evening I saw greens in-camera. My first thought was: “What have I done wrong now?”. Then it hit me like a hammer…aurora! I had no idea we could get aurora this far south in Norway. Fresh as I was I had no knowledge about kp values or aurora forecast services.

To say that I cried when it dawned upon me that I had stumbled upon aurora would be an exaggeration, but that my eyes became filled with tears is true. 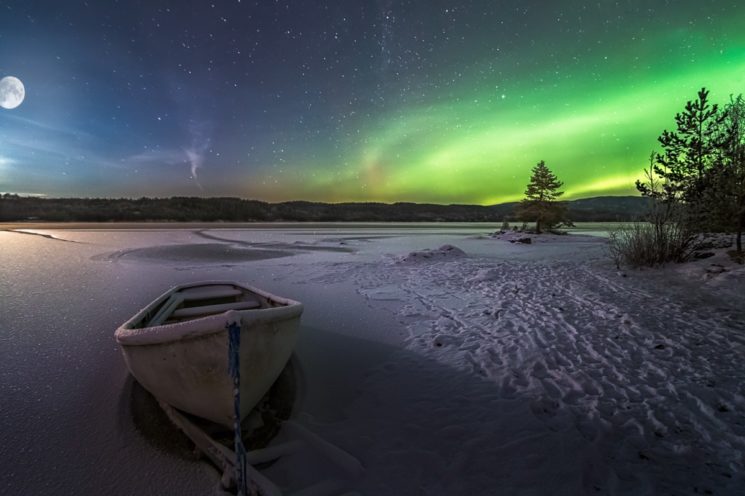 It was moonlight that evening, but I of course blew out the moon. The moon here is added in post placed approx where the original moon was located in the sky. If I had edited this image today I would have done things differently — more subtle. And there is too much magenta in the snow.

During my first night outings I had learned the hard way that if I underexposed I would have a hard time picking up the shadows without being left with a lot of noise and magenta color cast. After each shot I now carefully examined the histogram making sure I hadn’t blown out the highlights and that I had enough shadow detail to play with.

Those evenings out training I had also been reminded about my fear of the dark. That fear somehow vanished or was forgotten when I now stood in the midst of something so amazing it defied words.

A little later that evening: 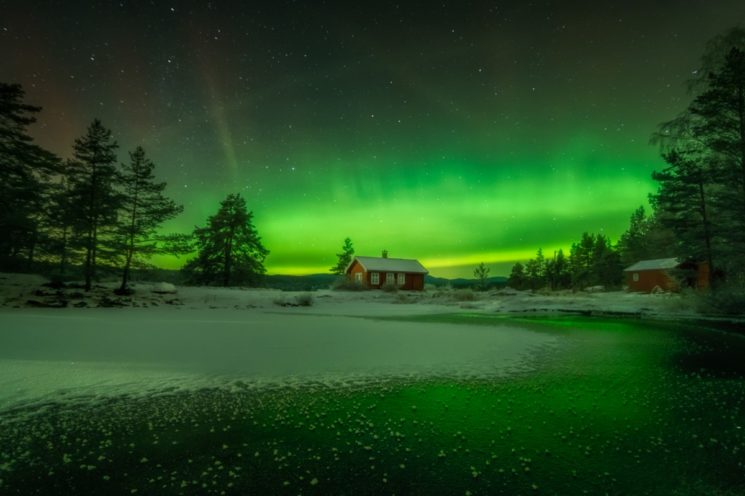 My first attempts at editing this image were small catastrophes. Back then Ivan Maigua did very well on 500px and was one of my great inspirations — it was beyond me how someone could create such striking and beautiful images. So when he said yes to edit one of my images from this evening I was super happy. Of course, Ivan had a few tricks up his sleeve and made this scene come alive. Most importantly, he generously shared his approaches with me. Enlightened I again embarked on the project editing this image.

After that day I learned to keep a keen eye on aurora forecasts, and headed out every time we had a clear sky and the forecast predicted kp5 or higher.

We are now in the beginning of September 2015 and the forecast predicted around kp6. That evening offered the strongest display of aurora I so far have witnessed. The colors were breathtaking. I could see the greens and now and then outbursts of magentas, but the bluish/purple tones were hidden in the dark something which resulted in not few ‘wow’ moments when I later examined the raw files. The camera sensor picked up the colors I couldn’t see.

We also had a very strong outburst in December. That evening the moon cast a golden glow across the landscape. The snow fell late that year, but patches of ice had formed on the lake. 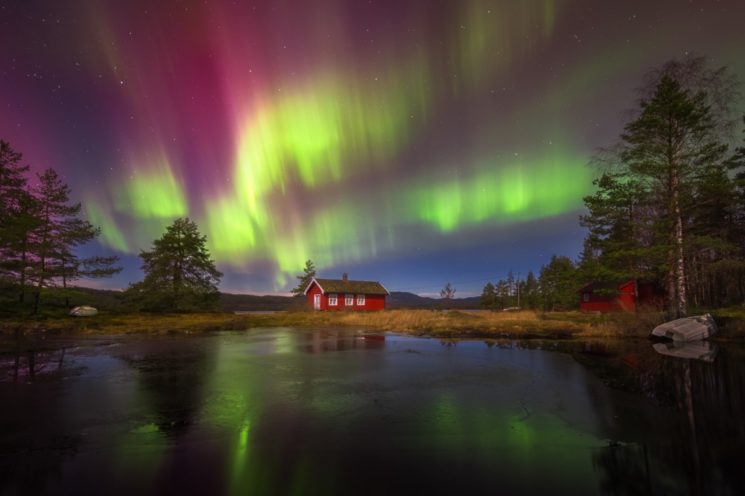 By now I had learned to blend exposures in Photoshop and always shot extra exposures for the shadows making sure that my main exposure hadn’t blown out highlights. It was often hard for someone who still struggled with paranoia in the dark waiting for a two minute or at times at a four minute exposure for the shadows to run its time.

My perhaps to date most popular aurora image was shot in the middle of March 2016. I had spotted an opening in the ice a week prior and hoped that I somehow could take advantage of it. Great was my luck when the forecast predicted aurora. I had the moon behind me. It opened up the shadows, but also to a certain degree unfortunately washed out the colors in the sky. 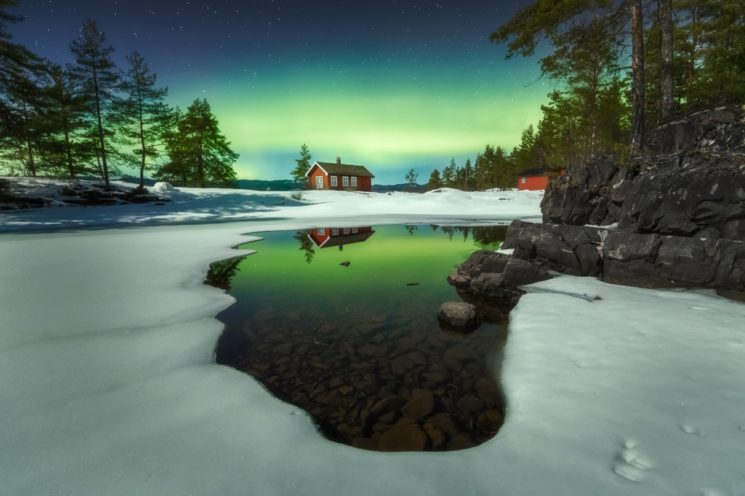 April 2017 — The aurora wasn’t very strong but I headed out anyway. I had gotten the Pentax K-1 a few months before and I was curious if it, like my former camera, would leave me with tons of magenta in the shadows if I pushed the files. It didn’t. 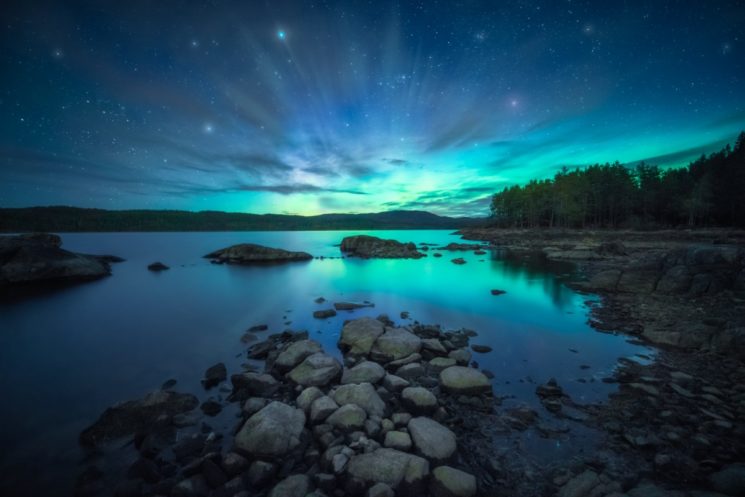 Approx a half year later and I was on my way to bed. The forecast had predicted a possible aurora but I wasn’t motivated to head out, not least because I had classes the next morning. Before wrapping myself in the duvet I peeked out the window. Was it greens I saw above the hill? I ran down, grabbed my camera, ran up the stairs again and shot an iso 24600, 2 sec handheld exposure to check if my eyes served me right. They did.

Dress again, say goodnight to my wife and drive as fast as I could to the lake. It was interesting to note how swiftly motivation returned. 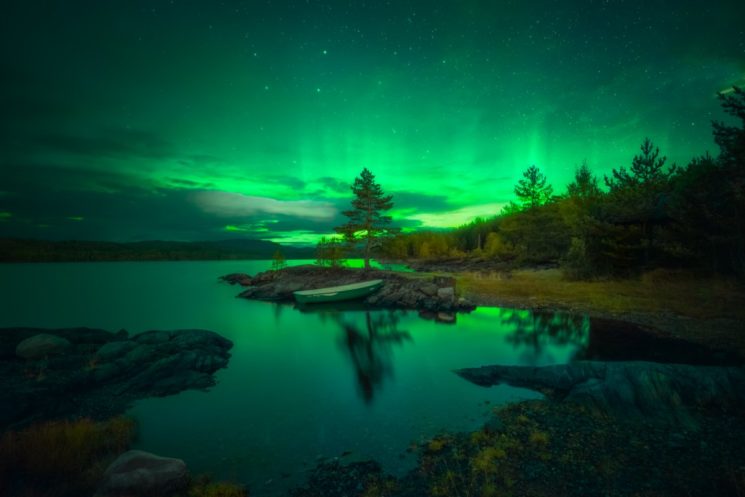 The last time I shot the northern lights was in the beginning of May 2018. Around thirty minutes after midnight it was sufficiently dark to get decent shots. On purpose I underexposed this image with around two stops to see what the K-1 Mark II was capable of. It did very well. 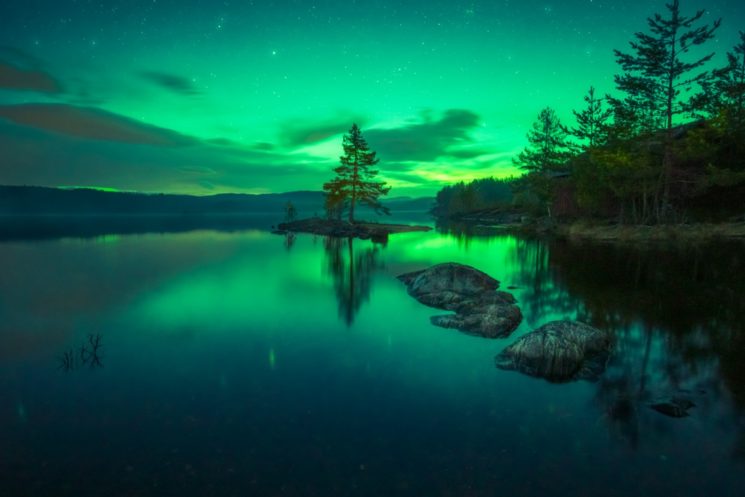 This past year can be summarized like this: Kp5 or higher…..overcast. Clear sky….kp1/kp2. There is something utterly magical standing under an aurora colored sky, and one can easily become addicted to such magic.

The Northern Lights look even more magical from the air