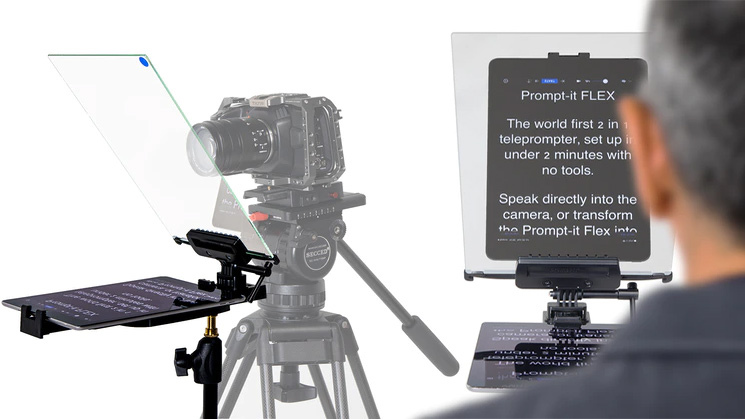 Teleprompters are valuable tools for anybody who creates video-based content. They allow you to easily script that content and read it while talking directly to the camera. As creating video content for platforms like YouTube has become more popular this year, so have teleprompters.

This one popped up on my feed recently from the folks at Prompt-it launching their new FLEX 2-in-1 teleprompter on Kickstarter. It works both on-camera with a tablet and a large piece of glass for easy reading, or you can mount it to a stand for use when speaking to an actual live audience – a new trick for a teleprompter intended for use with cameras.

It’s an interesting design, and pretty cheap for what it is, really. There are a number of teleprompters available for around this price, like the Parrot Padcaster and the new T2 from Desview, but it’s much larger than the Parrot and offers greater versatility than most other teleprompters in the low-budget price bracket.

It has two different ways of operating. The first is “The Camera Configuration” which is when you’re using it like a regular teleprompter for video. It sits in front of your camera, either on a second stand or an arm on your tripod or mounted to rails or whatever’s your preferred method of attaching a teleprompter. It’s a nice big screen so you can easily read large paragraphs of text at once while maintaining eye contact with the camera. 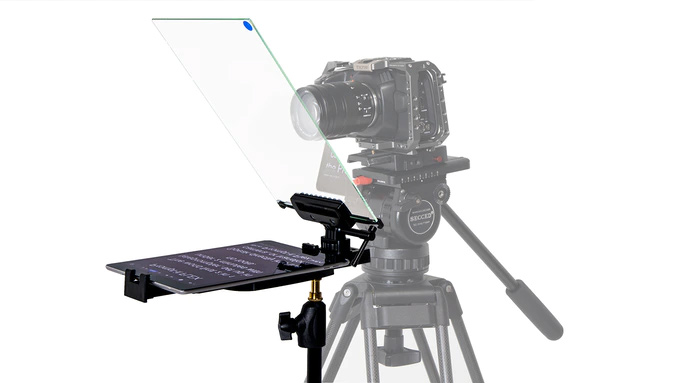 A glare cover is provided for when using this mode to prevent reflections on the rear side of the glass projecting back into the lens. It’s a soft cover, so it packs up small for portability. Most soft covers for teleprompters have one big problem, though. They can easily droop and fall into the view of the lens. Not with this one, though. There’s a pocket built into it, allowing you to reinforce the flop with just a piece of card.

What the Glare Cover pocket is for…

Richard will show you what the Glare Cover pocket is for. It is simply to help avoid any drooping of the glare cover in front of the lens (this can occasionally happen).

The other mode of operation is “The Audience Configuration”. This allows you to just pop the glass on top of a stand, with the tablet part holder mounted near the bottom out of the way. While large gatherings aren’t generally advised in most of the world right now, they’ll happen again at some point, and this mode is designed specifically for those types of situations where you’re speaking to an audience. 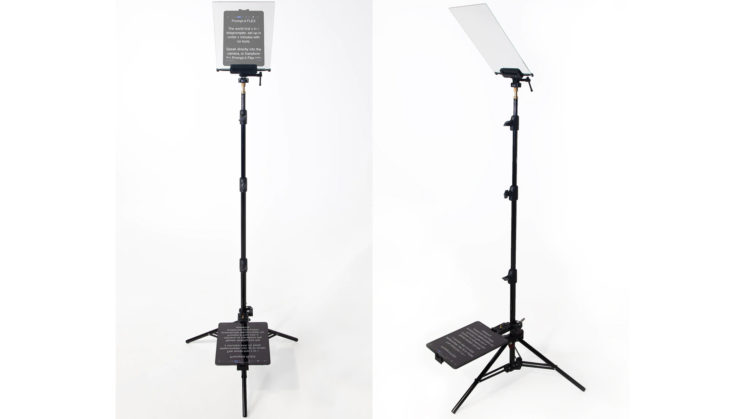 This mode isn’t just for presidential speeches and awards ceremonies, though. Photographers and filmmakers who teach workshops or give talks at trade shows or to local camera clubs can benefit from a free standing teleprompter like this in audience mode, too. So, if you’re shooting videos now, but plan to speak to a real audience once the world calms back down, this could be quite handy.

As mentioned, the FLEX 2-in-1 teleprompter is currently running on Kickstarter with 37 days left of the campaign. If you’re interested, you can back the project for $250 Australian, which is about $179 US or £137 in the UK. Shipping is expected to begin in January 2021.

What do you think? Would you make use of its “Audience” configuration or would it be permanently in front of your camera?

The MIOPS FLEX is the ultimate external camera trigger

« The lightsaber sound was inspired by a video projector motor and a TV set
Newspaper Navigator is a free online base of 1.56 million newspaper photos »