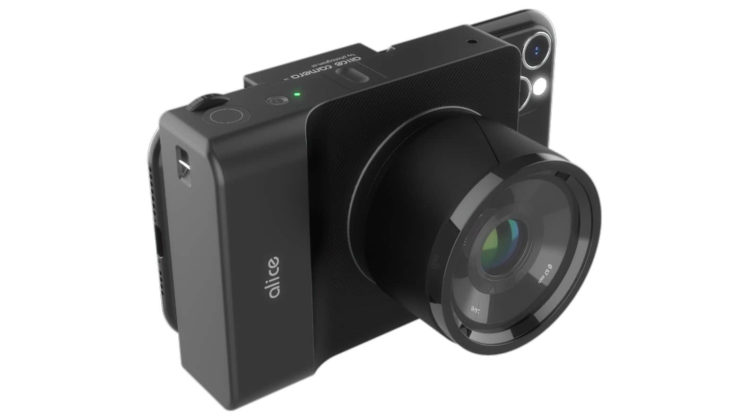 Hooking a sensor up to your phone isn’t an entirely new concept. Sony tried something similar a while ago and then gave up. Chinese manufacturer Yongnuo has also had a go at this idea although that one never seems to have actually been released. Now, it’s the turn of British company photogram.ai with the Alice Camera – a Micro Four Thirds sensor and mount that you slot your phone into.

It’s billed as an “AI-acceleraated computational camera” built from scratch specifically for content creators. It has a Micro Four Thirds lens mount with a quad-bayer sensor capable of producing 11-megapixel AI-enhanced images, and your smartphone essentially becomes the user interface. At least, that’s the theory. Right now it’s still in the concept/prototype stage.

It’s an interesting looking contraption, although looking at the video above and the information on the website, it appears that it’s iPhone only (at least right now). But they have posted the intended specifications for once it reaches its final design.

Their website says that it features electronic stabilisation, which essentially means there’s no IBIS. That’s fine, plenty of cameras still don’t offer IBIS (although it’s rare in a new model these days). But there’s no mention of whether or not it supports lenses that have built-in image stabilisation. Two of my Micro Four Thirds lenses have stabilisation built-in that doesn’t depend on the body having IBIS. Will those work? No idea.

The quad-Bayer sensor is a great idea, though, potentially offering capabilities that other Micro Four Thirds cameras currently on the market cannot easily offer. In theory, it should offer all of the features that quad-Bayer sensors provide in smartphones, like HDR and reduced noise in the final image. But at only 11-megapixels output, you can tell it’s destined more for online creators, and not those who wish to print big.

The Alice Camera will use its own app and essentially become the camera’s user interface. As such, there’s very little by way of interaction with the main part of the camera itself. On top of the Alice Camera, it looks like you’ve basically got a power button, a dial and a shutter button. It looks like that might be the 3.5mm microphone jack on the other side of the top plate, but that’s pretty much it.

Right now, all of the photos and concepts seem to show an iPhone. There’s no mention of iOS or Android on the website itself, but also no clues as to whether or not Android compatibility will be coming, too.

It’s expected to launch on Indiegogo sometime during Autumn 2020… Or in February 2021. I’m not exactly sure which as both dates are mentioned on their website. A £50 pre-order deposit right now secures a £450 bid once the campaign goes live. This pre-order option is only available to the first 100 customers. If you don’t pre-order, it’ll be a £550 starting price when the campaign commences, and the final retail price for the camera will be £750. They’re expecting to ship out to IGG backers in Summer 2021.

I think I’ll pass on this one myself. Even at £500 (£50 deposit + £450 when the campaign starts), it’s a bit much for what it offers compared to the Micro Four Thirds cameras I already own. Cameras that are cheaper and offer things like IBIS. Although, I am still curious to see how well the concept takes off this time. Sony’s might not have really hit the mainstream, and Yongnuo’s didn’t even seem to hit retailers, but maybe this time it’ll be different.

If you want to find out more about Alice Camera, check out their website.

« This is how to turn Sony video colors from horrible to awesome
Sick of looking at your Godox AD300? Blend it into the background with this stick-on camo wrap »