There’s a new Kickstarter up from a company going by the name of Negative Supply. It’s for the “Film Carrier Mk1”, a 35mm roll film holder for “scanning” with your DSLR or mirrorless camera. Not exactly a new idea, although they think they’ve come up with a new way of doing it.

For those developing their own film, it could be a handy way to get your shots into the computer quickly with the least amount of fuss. They claim it can let you do it in 5 minutes or less. It’s not cheap, though.

The company has already ploughed straight through their $15,000 funding goal and is about to hit their $35K stretch goal, where they promise to develop a 120 roll film version. The least expensive way to back the project is the $249 early bird. They also have a “Pro Mount Mk1”, which is a base upon which the Film Carrier Mk1 sits. This brings the price up to $399. And, remember, this is an early bird price. 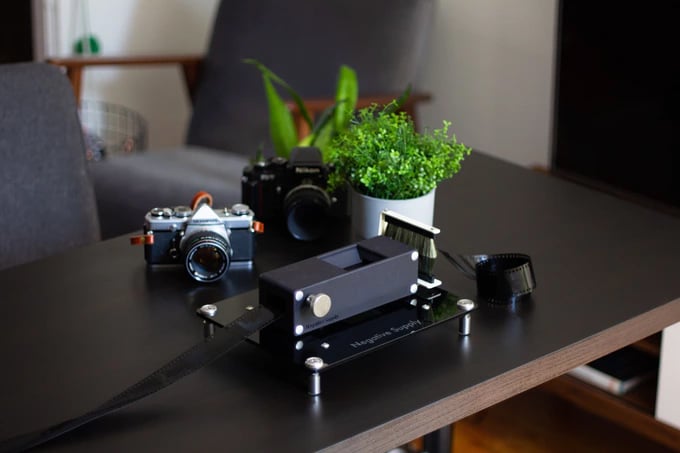 It has a fairly simple mechanical design whereby you load your film into the machine and then advance the frames one at a time, snapping away as you go. The description on the Kickstarter says that the film is “forced flat” to minimise any curl or distortion.

Using a unique channel technology, each frame is forced flat using our customized guide path design. This ensures there is near zero distortion for sharp images across the frame, and allows you to have confidence in the sharpness and precision of your scans.

They say that it also offers “full frame” scanning, meaning that it goes right out to the border of the image area instead of cropping off the edges like many other low-end scanners and minilabs.

There is definitely something to be said for “scanning” film with a camera. They’re much faster than flatbed or drum scanners, and they offer a great degree of control, as you’re shooting raw. So, you can often pick up more detail in the shadows and highlights than you might on a scanner with a limited dynamic range producing only 8-bit files.

That being said, not at this price. At least, not for me. For under $400, you can pick up a great deal on a used Epson Perfection V750, which is about as good as it gets for flatbed scanning film (with the obvious exception being the Epson Perfection V850). And you can scan film that’s already been cut up and put into film holders with the V750 – and it’s still fairly quick to scan 35mm or 120 because you can just load up a bunch of strips at once and batch them. And if film curling is an issue, you can always wet mount.

Ok, so the V750 and similar flatbed scanners do have a little more set up time, especially if you go the wet mount route, but if you want to scan with a camera on the cheap, then you can also just get a couple of sheets of anti-newton glass and a light panel – A light panel you’d still need with the Film Carrier Mk1.

One design advantage the Film Carrier Mk1 does offer over the two-sheets-of-glass option, though, is that there’s a deep black channel above the film to help prevent light from spilling onto it from above while it’s lit from below. Of course, this is something else that can be solved easily when going the glass route using some foam core and gaffer tape.

Still, for some, this would no doubt become a valuable tool, especially if they’re shooting a lot of 35mm film and want a way to quickly scan in all their rolls before chopping them up and slipping them into holders.

How to make a LIDAR driven motorized film carrier

Automating scanning film with the help of Lego, a Raspberry Pi and a little machine learning

« Getting out of creative rut: what happens when a portrait photographer tries to shoot street photos
This is what it was like to be a cinematographer of The Empire Strikes Back »