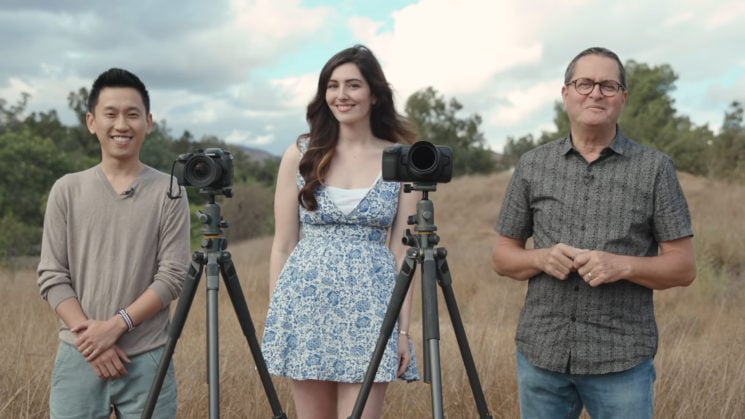 The Panasonic GH5 has been a favourite of many video shooters since its launch early last year. Offering 10Bit 4:2:2 video, 5-axis stabilisation, decent stills quality and a whole bunch of other features, it was an instant hit. Earlier this year, Blackmagic announced the Pocket Cinema Camera 4K. Offering 4K DCI 12Bit RAW video and the same sensor as the Panasonic GH5S.

But how does the Pocket Cinema Camera 4K stand up against the GH5? That’s what Jay P Morgan and   Andy Cao from The Slanted Lens look at in this side-by-side comparison.

While both Jay P and Andy admit that they’re not expert colourists, the comparison shows some clear differences between the two cameras. When exposed well at a low ISO, but cameras hold up extremely well. But the guys run them through a battery of tests to look at the dynamic range, colour science, ease of use, ergonomics and stabilisation of both cameras.

That last one’s a bit of an unfair comparison. The GH5 has 5-axis IBIS and the Pocket 4K doesn’t have built in stabilisation. So, you’ll need to use stabilised Micro Four Thirds lenses or a gimbal if you want anything even approaching stable while shooting handheld. But then, once you through a Pocket 4K on a gimbal, it’s a little unfair on the GH5.

I’ve wanted to see this particular comparison ever since the Pocket 4K was announced, as I’ve been considering both of these cameras for my future video needs. I think I’ll wait until the Pocket 4K gets Blackmagic RAW for the faster editing workflow, but I think this video’s pretty much made up my mind for me.

The Pocket 4K looks to be the clear winner in many aspects when it comes to the actual image quality. The lack of flippy out (or even tilting) LCD will deter some, but when you think about who the camera is aimed at, you can understand why.

The whole comparison review is about 25 minutes long, but it’s well worth a watch if you’ve been considering either of these cameras.

« Leica Instant M: the first instant camera designed for Leica M lens
Photographer who shared stock photos as his own rebrands himself as “Photoshop specialist” »