It kinda looks like a phone from a decade ago, except it runs a modern Android operating system with a bezel-less design. And that design does look quite sleek. But what makes me immediately think of flip phones and slide out keyboards is that it has these strange popup cameras. That phone is the Oppo Find X.

You might not have heard of Oppo before, but they’re owned by the same company behind the OnePlus You probably have heard of those guys. Oppo is a big smartphone brand in China, and the Oppo Find X is their new flagship phone. A first for Oppo, though, this phone will be launched globally.

The Oppo Find X contains a 6.4″ OLED display, with virtually no bezel. There’s no notch and no buttons at the bottom. There’s also no fingerprint scanner (we’ll get back to that later). As for the internal specs, they’re very respectable for a 2018 flagship phone. Snapdragon 845 chip, 8GB RAM, up to 256GB of storage, with dual sim and global LTE support.

Despite the cool-but-weird design choice, the cameras do seem quite respectable, in terms of resolution. On the front there’s a 25MP selfie camera (perhaps a little excessive), and on the rear a pair of 16MP and 20MP cameras. All of these are concealed and hidden from view when not actually using them.

And that’s what’s most interesting about those cameras. How you access and use them. And it does look slick as hell. Fire up your camera app, and up they pop. Let’s take a quick look, courtesy of The Verge.

And for the front camera, when you’re trying to maximise screen space, it’s a fairly obvious solution, if not a little troublesome (we’ll get back to that, too). What’s strange, though, is that this popup system also includes the rear cameras, not just the front ones. Which doesn’t make much sense. You’re not exactly trying to maximise screen space on the back of the camera, so why hide the cameras? 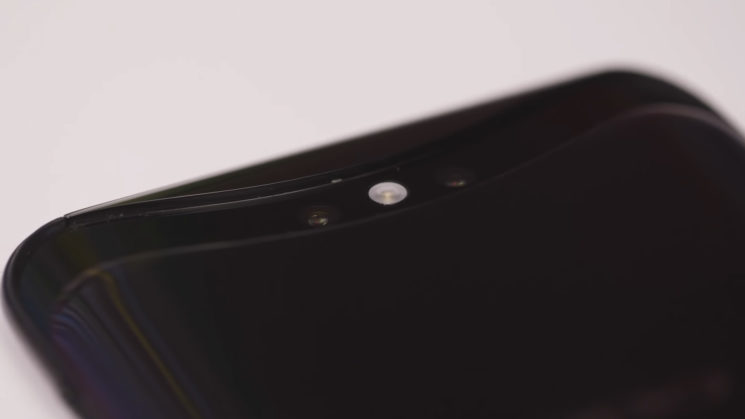 So, yeah, that’s weird. But about those two things that I said I’d get back to…

First, the “troublesome” issue with an idea like this.

Phone manufacturers have spent much of the last few years trying to eliminate as many moving parts from their devices as possible. Right down to the buttons. Mechanical wear and tear is typically still the biggest point of failure in something like a smartphone. A mechanism like this is also going to be a magnet for dust and every bit of dirt the phone could be exposed to. Every time the phone opens up, it’s going to attract just a little bit more which gets trapped when it closes back down.

And that’s going to happen a lot, which brings me around to the second point. There’s no fingerprint scanner on this phone. But there is facial recognition. So, every time you go to unlock your phone, that little camera is going to pop up, take a look at you, and then go back down again. That could happen 50 or 100 times a day if you’re regularly checking for Facebook or Instagram updates.

Not only does this increase the odds of crap getting into the mechanism and gunking it up, but how is this mechanism powered? Moving those cameras 50-100 times a day or more is going to suck up a lot of juice. And it has to move it twice every time it’s accessed. Once to open it and again to close it. That’s going to be a big drain on battery life. It is quite a sizeable battery, at 3,730mAh, but it’s still going to be wasting a whole lot of power that non-moving cameras wouldn’t.

It does look extremely cool and from a design standpoint, it’s a beautiful idea. From a practical one, though, not so much.

Oppo has not yet announced pricing for the US and Europe, nor a release date. It’s expected to be available to order in China starting today at a price slightly less than comparably equipped Android phones.