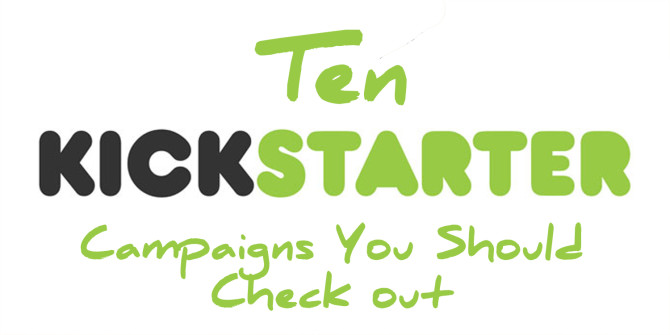 I’m a firm believer that gear is not as important as vision, creativity, talent or perseverance.

That being said, some gear cannot be replaced by any amount of those qualities.

I can’t tell you were to buy creativity or vision, but I can show you some could-be products that might save your outdoors shoot or make your post-processing tasks just a bit more bearable.

Here are 10 photography-related Kickstarter campaigns you should check out.

You will notice that some campaigns are more innovative than others, and the degree of relevance to your day to day workflow will vary as well. The requirement I set to make this list was simple: the product has to be something I would personally like to back (or already did), or that I found myself showing it to a friend who I thought might find it useful for his workflow.

First topic of the day is bags. Three of them, in fact. Unless you’re brand new to photography you probably have a camera bag, but this is one of those items that you just can’t have too many of. Horses for courses, you know.

The Haven & Florin has plenty of great features that you’d hope to see in a camera bag. It’s customizable, can hold a decent camera kit, has space for a laptop, dedicated space for memory cards and is water resistant. It also has great additional storage spaces, tripod straps and can be used as a regular backpack once you remove the interior. The best part though is that while it seems like a great camera bag, it doesn’t actually look like a camera bag.

The downside is that this bag will only ship within North America.

This is another camera backpack that doesn’t draw attention, with many of the same advantages as the bag above. Throw in a few cool extras like side access and the ability to connect your lens cap to the bag’s strap and you’ve got a bag definitely worth considering.

Unlike the H&F bag, the Brevitē will ship globally, but the padded camera insert comes with a sizeable price tag – $65 for international shipping.

CamCarry – The ultimate way to store & carry your camera

The last bag on the list is of a different breed, and not just because it is meant for when you want to travel light.

The CamCarry puts extra focus on design and appearance, rather than a long list of features. Being a hand crafted, high quality leather product, it is a fashion accessory as much as it is a camera bag.

Other than the fact that this campaign has already reached its goal, backers might also find it reassuring to know that this is the fourth successfully-funded Kickstarter campaign by these guys.

While I often use my GoPro tethered to my cell phone, I’ve never held them so far apart as in this video. In fact, I hold them back-to-back exactly as the CAMpanion does and for the exact same reason – to use my phone’s screen and flashlight. For $30 you will no longer have to hold the two together, but the really cool part is that you can pay just $5 to get a 3D printable file once the campaign ends.

When the going gets tough, you need a light that isn’t limited by where your cellphone can go. Enter the Sidekick. This awesome little light attaches directly to your GoPro and can probably be put through anything you GoPro can handle.

It’s small, lightweight and waterproof. Being able to mount the Sidekick above the camera and the ability to choose between two modes (wide – 600 lumen, narrow – 400 lumen) make it ideal for diving. It can also double as a cycling light.

The Sidekick is on its way to reaching 300% funding, and right now about 800 people agree with me that this looks like an awesome piece of equipment.

Prynt: the first instant camera case for iPhone and Android

This is by far the funnest product, and over $600k pledged shows it hit the spot.

Instant cameras have made an impressive comeback, and the Prynt adds two new dimensions to the category. The first and most obvious is that your instant camera now has a screen. The second might not be used as often but definitely includes the wow factor – scanning a photo will play, via augmented reality, a video recorded a few seconds before the photo was taken!

If you’re into shooting outdoors, especially for extended periods of time, power is always a concern. Portable battery chargers are pretty common these days, but are only worth as much power as they can hold in one charge.

With this fuel cell power generator you can go completely off grid (the power grid, that is), as long as you have some lighter gas.

It can’t charge your DSLR camera batteries, but it can charge any USB charged device – cellphones, tablets, GoPros, time lapse devices and perhaps your new Sidekick, just to name a few.

The Kraftwerk is on its way to $1M and I can’t wait to see the future implementations of this technology.

If you need a portable battery charger and are extremely clumsy, or you just want a power supply that will probably outlast anything it is capable of charging, look no further.

It doesn’t offer any exciting features as far as the tech specs go, but the Poseidon promises to get the job done wherever whenever. After all, reliability is the name of the game when it comes to a power supply.

If you spend enough time shooting outdoors to need a portable battery charger, chances are you get your fair share of dark hours. I’m sure you already have a flashlight in your kit, but you don’t have a ZEROHOUR RELIC XR. Other than being a badass light source, it also doubles as a backup power supply for USB charged devices.

To make things even better, the RELIC XR is waterproof making it a great companion for the Poseidon.

Getting funded ten times over, this is the most funded flashlight project on Kickstarter to date.

Now that you’ve travelled with your new bag, dived with the Sidekick and conquered the last frontiers with your fancy power supplies and tactical flashlight, comes the dreaded last phase – editing.

Unless you get someone else to do your editing, I suggest you do whatever you can to make the process more pleasant. While the creator of the Foot Hammock didn’t have photographers in mind, it won me over the minute I saw it.

I know I said I’d present ten Kickstarter projects, so consider this one a bonus.

Very briefly, the T-Set appears to be an awesome project. It offers a bunch of pro motion control features but at significantly lower prices than its competitors. This could be a great kit for both beginners and advanced users and probably my favorite campaign in a while.

You can read more about the AXSY T-Set in a previous post I wrote about it.

Have you backed any of these campaigns? Have you seen others that you think should have made the list? Let me know in the comments!