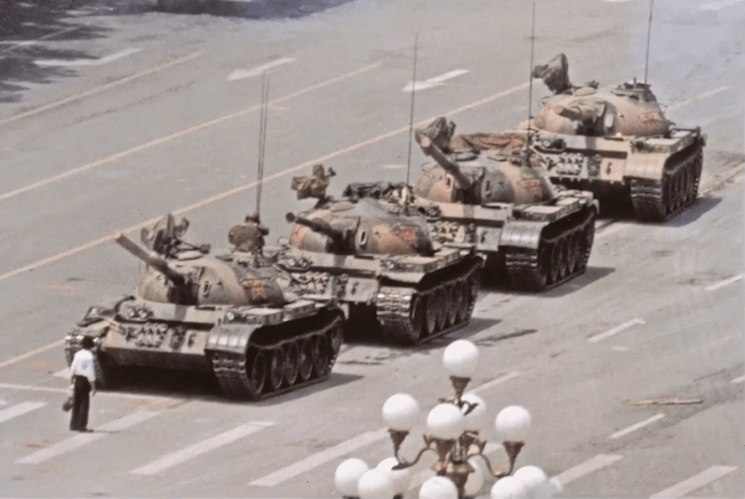 As you probably know, TIME Magazine has recently published a list of 100 most influential photos of all time. Of course, Tank Man can’t be left out from this list, since it’s definitely one of the most iconic and influential photos ever taken. Jeff Widener took it in Tiananmen Square in Beijing, when the Chinese troops attacked pro-democracy demonstrators. Thanks to Jeff and TIME Magazine, there is an interesting and moving video story about this photo and the conditions in which it was taken.

On that 5th of June 1989, Jeff was at AP office at the Diplomatic Compound when the message from New York arrived. They didn’t want anyone to take the risk, but they said they would have appreciated it if someone took the photo of occupied Tiananmen Square. Jeff pulled the shortest straw (literally), so he was sent to take the photos.

Jeff entered a Beijing hotel. The hotel security, as he’d heard, used electric cattle rods on journalists to make them leave all the equipment. So he’d hidden his cameras and hoped for the best. He approached a Western college student, Kirk Martsen, who later played a major role in photographing the Tank Man. They went up to Kirk’s room, where Jeff photographed the events in the occupied square.

After a while, Jeff ran out of film. If Kirk hadn’t been there, the Tank Man photo would’ve never been captured. Jeff couldn’t expose himself to being discovered as a journalist, so he sent Kirk out for new rolls of film. After two or three hours, he came back carrying one roll, which was all he was able to find.

Jeff went on taking photos, when a column of tanks appeared on the square. It seemed like a good press photo, so he composed and prepared for a shot. All of a sudden, there was a man in front of the tanks. A single man, carrying a shopping bag, facing a force that could crush him in a matter of seconds.

At first, Jeff was annoyed because he thought a man would ruin his composition. But then it hit him. This man was a symbol of rebellion, an individual who’d just had enough. The tanks stopped, there were gunshots everywhere, but the man just stood there. As I watched the video, I could feel the time stop at this moment. The tanks tried going around the man, but he stepped back into their path, refusing to let them pass. He climbed onto one of them, and shortly after he was whisked away.

Jeff took three photos: two were unsharp, and only one was acceptable. That’s the one: the Tank Man. He transmitted it over the AP wire and it hit the front pages all over the world. There were other photos of this moment, but due to fast transmission,  the fact that it’s a really good capture, and probably some luck – it was Jeff’s photo that became recognized all over the globe.

It was years later when Jeff realized that the photo he took was iconic. Of course, realizations like this usually come after some time. The identity of the man stays unknown to this day, and so does his fate. Still, he remains a hero and a symbol of fight, rebellion and of standing up for your rights. I deeply admire him for the message he sent, and I am thankful to Jeff for making this moment eternal.