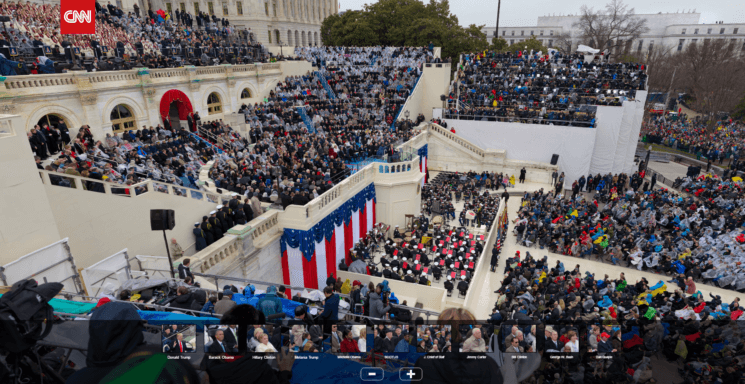 If you wonder who was at Donald Trump’s recent inauguration, here’s something to satisfy your curiosity. CNN takes you there with a single image, as they have published a gigapixel photo of the event. Since gigapixel technology has taken off in the past couple of years, it was probably expected. So, now you can finally see it and check out every detail of the event.

The photo is available on CNN’s website, along with the short instructions. You can pan across the crowd at and zoom in to see the faces. In the lower part of the page, you can see the thumbnails of some notable people who visited the inauguration. By clicking on a thumbnail, you get the zoomed view, so you don’t have to search them manually.

When a gigapixel photo of Barrack Obama’s 2009 inauguration was first published, I remember it as big news, since this technology was quite new at the time. Eight years later, the technology behind Trump’s inauguration photo is a bit more advanced (as expected). You can pan across the photo and the zoomed view gives a clearer image.

Were you there? Do you recognize anyone you know?

NASA’s Curiosity rover has created an insane 1.8-Gigapixel panorama of the Mars surface
« The first ever recording of light’s “sonic boom” was made with the fastest high-speed camera in the world
Women’s Work – a project that breaks down professional gender stereotypes »