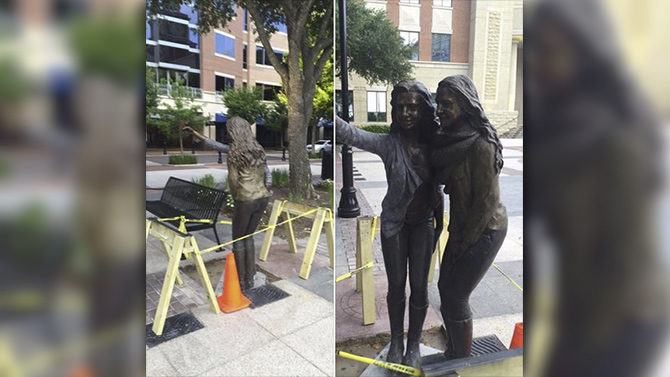 People have been creating statues to celebrate the the real and fictional characters they have admired for at least the last 35,000 years.  Washington has Lincoln, Philadelphia has Rocky, and Sugar Land, Texas has… two ladies shooting a selfie.

Described by one Facebook commentator as the reason “why people hate the young generation!”, opinions seem pretty consistent regarding the new city feature.

The reaction on Twitter doesn’t seem to be much better.

Selfies seem to just be a sign of the times, and while it may usually be a good thing for a city to try and publicly acknowledge the ever changing modern world in which we live, it does seem maybe a little premature to dedicate a statue in honour of the selfie.

The inclusion of sculpture in the Town Square plaza aligns with the continued vision of the City and the Legacy Foundation’s commitment to establish cultural arts amenities that ‘provide and/or support activities and facilities that enrich the artistic, cultural, educational and historical character of Sugar Land.’

According to a document, the two statues, along with a third piece was donated by resident Sandy Levin.  These are to be the first  of a 10 piece collection located at Sugar Land Memorial Park, Oyster Creek Park, and Fire Station 4 in First Colony.

The document goes on to state that these sculptures “will be of people representing the activities that occur in the square”.

I suppose it’s slightly ironic that almost everybody complaining has a selfie as their profile photo (as opposed to an actual portrait).

On a more serious note, we would like to wish all the residents of Sugar Land, and other areas affected by the current Texas floods the very best of luck.  Stay safe!

What are your thoughts on the selfie statue?  A harmless bit of fun?  An insult to the local residents?  Or simply an ugly eye sore?  Let us know what you think in the comments.