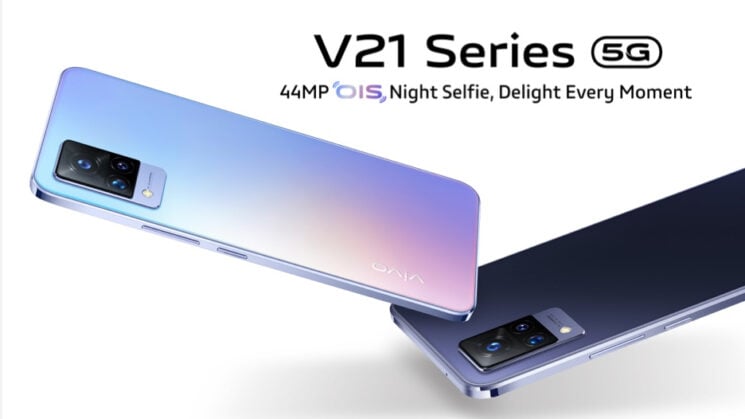 VIVO has announced their new V21 series smartphones, two of which (the V21 and V21 5G) feature probably the best selfie camera out there today. It’s an optically stabilised 44-megapixel front camera with an f/2.0 aperture. OIS isn’t new to selfie cameras on smartphones, but it’s the first time we’ve seen it pop up on a front camera for a long time – if we’re not counting the back-to-front flippy camera of the ASUS ZenFone 6. Which we’re not, really.

The camera resides in a little notch at the top of the screen and has two LEDs embedded to act as a flash in dimmer conditions. Unlike many other front-cameras on smartphones, even flagship smartphones, this selfie camera also has real autofocus.

On the back, there’s a triple camera array. But let’s focus on the selfie camera a little first, as that’s its big selling point. For social media users, especially those with feeds that regularly call for selfies or vloggers, it’s a pretty big deal. You can shoot your selfies or shoot videos with a stabilised camera, and it even has a dedicated “Super Night Selfie” mode for shooting in dark conditions.

On the rear of the smartphone, there’s no fancy gimbal, such as that found in the VIVO X51 5G. You do, once again, get optical image stabilisation in the main camera, though, with a 64-megapixel 26mm equivalent f/1.8 lens on a 1/1.72″ sensor with phase detection autofocus. Again, though, the OIS doesn’t appear to be available when shooting 4K video with the main camera. Accompanying this are an 8-megapixel f/2.2 16mm equivalent camera with a 1/4″ sensor and a 2-megapixel f/2.4 macro camera.

Another big selling point for vloggers and other content creators is that this phone actually includes a feature that’s often missing from new smartphones these days. It has a dual sim tray that can accept a microSD card slot, so you can throw a lot of storage in there and shoot for a while – which is handy for travel vloggers now the world’s starting to open back up a little.

But temper your expectations. The VIVO V21 series are by no means flagship cameras, with the V21 and V21 5G expected to retail for about €320 and €340 respectively once they hit Europe. There’s also a VIVO V21e coming for around €240 that features the same rear camera setup, along with a 44-megapixel selfie camera but without OIS. It does feature EIS, though.

At the moment, the devices only seem to have been announced in India. There’s no word when they’ll reach the rest of the world yet. But for now, you can find out more on the VIVO website.

Hopefully, decent selfie cameras will start coming to more smartphones soon. Even if you’re not a vlogger or an Instagram starlet, just being able to get better quality selfies with your friends again now that parts of the world are starting to open back up is going to become a valuable feature.

Not to mention, many folks around the world are still working from home, video chats have become more of a thing, now, too. And for those that would normally have travelled to other countries for work and to meet people face to face, that may still be their only option for a while. DIYP, for example, hasn’t been to a trade show now since September 2019 – because there haven’t been any – and there are still no real solid dates for when they’ll start back up again.

The better that front camera can become, the more beneficial it’ll be for all of us.

« Is it really worth upgrading from the Mavic Air 2 to the DJI Air 2S?
Canon patents reveal some info about eye-controlled AF coming in the EOS R3 »