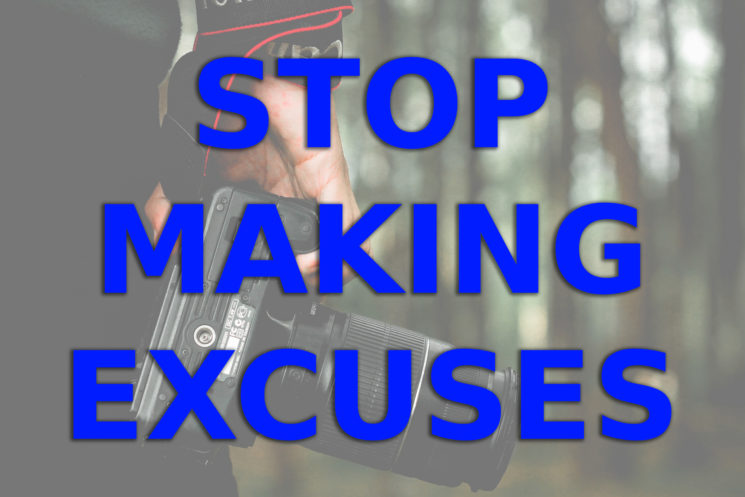 Let’s face it – we all make excuses. I admit, when I don’t feel like doing something, I’m a champion of procrastinating and making excuses. However, this can cost us a lot in the long run and it can interfere with our success in every field, and photography is not an exception. In this video, Ted Forbes goes through five common excuses photographers make that keep them from becoming successful in their business. You may recognize yourself in some of them, but Ted also gives you some tips on how to turn them around.

“Algorithms are all rigged anyway,” “Instagram only rewards photos of attractive girls and saturated landscapes,” “It’s all just fake engagements.” Do any of these sound familiar? First, you need to figure out why you are posting your work. Do you want to become internet-famous? Or you want to gain an audience that will truly follow what you do? Because, you know, you can be successful on social media even without a huge follower base.

Next, you need to ask yourself how often you are posting and how consistent you are about it.  Even though Instagram isn’t real life, there’s one thing they share: if you want to be successful, you need to show up.

Then, think about what you are posting. Are these only photos without any context? Or do you utilize stories, videos, blogs, and other things social media lets you share? People prefer seeing what’s behind the scenes and getting to know you a bit more while also enjoying your work. And this brings us to the next excuse:

Video capabilities have been an integral part of DSLR and mirrorless cameras for a while now. You can take some high-quality videos even with your phone. Still, some photographers stubbornly refuse to integrate video into their work. Ted gives an example of two of his friends, one who incorporated video in his services, and the other who didn’t. Guess which one of them still runs the successful photography business.

You don’t need to replace your photography with video, nor it has to overpower your stills. But adding some video work at least to your social media or YouTube accounts will let the audience get to know you and your work from a different perspective. After all, it will expand your knowledge and skillset, which is always a good thing if you ask me.

3. Blaming it on the lockdown

Okay, this one is applicable only to 2020 so far, but it will likely go on into the next year too. Also, I’d say this kind of excuse is more applicable to hobbyists like myself than to professional photographers who make a living from their work.

We’ve all been stuck at home this year, mainly in our own hometowns. “There’s nothing to shoot,” you may think. Or you’ve just felt too unmotivated, drained, anxious, or depressed to shoot (I know I have). So this is a kind of a tough one, it all depends on how you feel and what stops you from shooting.

But, if you feel like you want to take photos and “there’s nothing to shoot,” think again. You can always revisit your favorite locations in your hometown. Try seeing them through someone else’s eyes, or try out different techniques, styles, and gear while shooting there. Also, there is plenty of stuff to shoot even in your own home or backyard. So if you really want to take photos, now’s the time to try new things even in familiar surroundings.

This may not be an excuse as such, but it’s something you’ll notice in many photographers: bringing too much gear to the task. Ted gives his own example: he brought a bunch of gear to a recent shoot, only to end up shooting very little because he had too many options. This is one of the reasons why I often limit myself when traveling and only bring one camera and one lens. I also end up shooting way more when my choice is limited than when I bring everything I own. I’m bad at making decisions when there are too many options, so I guess it’s good that I don’t own too much gear.

5. “I can’t shoot without [enter the piece of gear here]”

One of the excuses photographers often use for not shooting is not having the latest, the best, or the most expensive gear. To be fair, sometimes it’s necessary to buy a new camera, lens, or anything else to upgrade your kit. It can inspire you to go out and shoot to test out all its possibilities. But you definitely shouldn’t limit yourself if you’re currently not able to upgrade. Remember, you’ve taken plenty of great shots with the stuff you already have, there’s no reason not to continue shooting with it. You’ll upgrade when you have enough money or when the time is right, but you shouldn’t just stop shooting in the meantime.

I recognized myself in the third excuse the most. Ever since the pandemic started, I have very rarely been inspired to take photos. But when I feel the need to shoot, I must remember that there’s always something around me that can be turned into a great photo. If nothing else, I can still travel to new cities in my country and take travel photos at places closer to home.

Do you make any of these excuses?