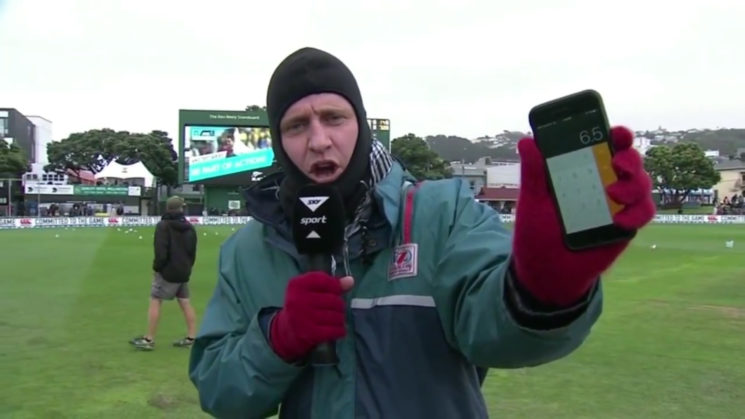 It’s said that the truth is often stranger than fiction. I’m not entirely sure about that, although it can be far more hilarious. In this example of a man who’s confident in his words, we have a sports reporter talking about the light levels on the cricket field. It can become difficult see the red ball when it starts to get dark. So, light meters are often used to measure the light levels. If it’s below a certain amount, the game is called.

To illustrate his point, he pulls out his “light meter” to take a reading and show the viewer. Unfortunately, his “meter” was an iPhone running the calculator app. It showed a “reading” of 6.5, which indicated that it was getting rather dark.

After measuring one side of the field, he just had to be sure. So, he pointed his “meter” the other way, and measured again. Sure enough, 6.5. Several viewers have watched the show have commented that it was not a joke, as he was called out by a commentator in the studio later in the show.

I can’t believe that it wasn’t an attempt to be funny. I mean, it must have been. Even if one don’t know what a light meter looks like, surely they’d be able to recognise a calculator? If it was a genuine screw up, though, oh boy. I think Sky Sport New Zealand need to find some new reporters.