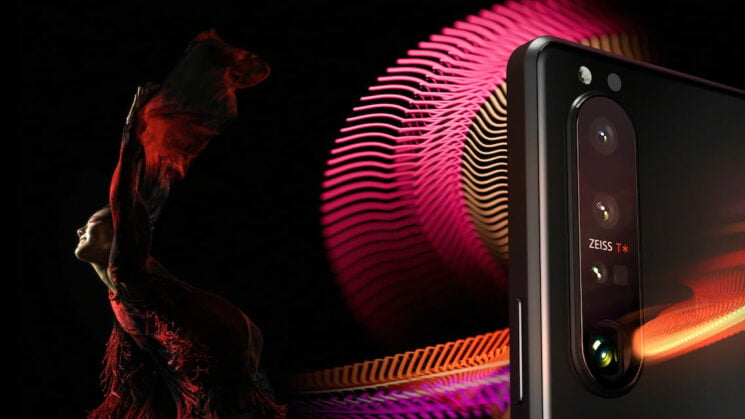 Sony has announced its two newest smartphones, the Xperia 1 III and the Xperia 5 III, both of which contain a triple-rear camera setup with a hybrid zoom lens offering the equivalent field of view to that of a 70-105mm focal length range on a full-frame body at its extremes. It also contains the usual standard 24mm and ultra-wide 16mm equivalent field of view cameras.

The variable focal length of the “hybrid” zoom system is thanks to a periscope system built into the camera module which physically moves the elements closer to or further away from the sensor. It seems to offer minimum and maximum focal lengths on the zoom, but nothing in between – for which it reverts to digital processes.

Both smartphones use the same interesting setup, featuring Zeiss lenses with Zeiss T* coatings and three separate camera sensors, all of which are 12-megapixels. First up is the main camera, which offers a 24mm full-frame equivalent field of view and has an aperture of f/1.7 with a 12-megapixel 1/1.7″ Sony Exmor RS sensor. This large sensor and wide aperture should be great for those low light shots and nights out on the town (when we’re allowed to have nights out on the town again).

The second camera is the most interesting one, though, which is the hybrid zoom. It uses a 12-megapixel 1/2.9″ Sony Exmor RS sensor, so not the largest, with a lens offering the full-frame focal lengths of 70mm and 105mm and an aperture of f/2.2. As mentioned, it uses a periscope system to physically move the elements and adjust the focal length of the lens, although it doesn’t seem smart or accurate enough to make arbitrary stops in between one extreme and the other.

The third camera is the 12-megapixel 1/2.5″ Sony Exmor RS sensor with a lens offering a 16mm full-frame equivalent field of view at an aperture of f/2.2. Sure it’s not the fast f/1.7 of the main camera, but for most landscapes and places you’d want such a wide-angle view, given that you’ll probably be shooting them during the day, this should do pretty well.

Naturally, as they’re Sony smartphones, the cameras also feature real-time Eye AF for both humans and animals and can track your subject even if they’re on the move or have one eye obscured. You also get regular real-time subject tracking, which makes use of AI and Sony’s 3D iToF sensor. They say it’ll stick on them even if they temporarily move out of sight.

Naturally, you also get 4K video shooting, “powered by CineAlta”, offering 21:9 aspect ratio 4K HDR, 120fps slow motion as well as 24, 25, 30 and 60fps. Presumably, it also shoots 16:9, although the specs sheets don’t specifically mention that resolution or its capabilities. That’d kinda suck if all it offered at a 4K width was 21:9. Anyway… While shooting video, you also get optical and electronic stabilisation thanks to Optical SteadyShot with FlawlessEye, Intelligent Active Mode and an intelligent wind filter.

It looks pretty interesting, particularly that 70/105mm equivalent lens for portrait shooters who might want to grab a quick one when they’re not near their main camera. I’ll wait until it’s in the hands of real people before I make a judgement, although I don’t think it’s time to get rid of your A7R IV just yet.

Sony doesn’t appear to have announced a price for either smartphone yet, but I’ll bet neither of them will be particularly inexpensive. Bonus, they’ll apparently come in both dual-SIM and SIM+microSD variants. So, if you want a huge ass memory card in there for shooting lots of photos (or backing up stuff from your main camera), you can do that!