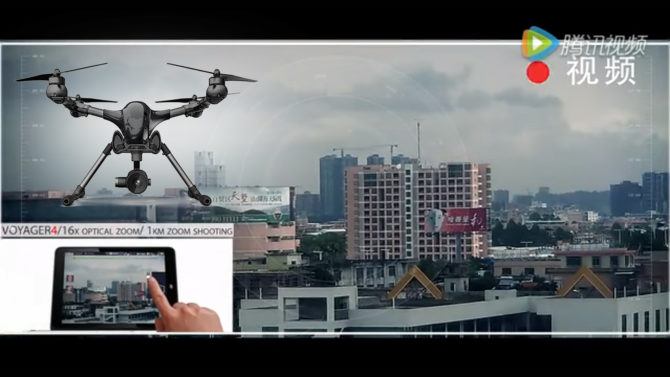 After a zoom feature appeared in DJI’s new Zenmuse Z3 drone camera, I knew it wouldn’t be long before we saw more. What I did not expect, however, was a camera that could give the range that this does.

The recently announced Walkera Voyager 4 boasts a rather impressive 16x optical superzoom lens. This puts it way beyond DJI’s Z3 and seems to pummel it into the ground. But, how good can it really be?

The advantages of superzooms like this are obvious. It allows police to more easily gather accurate evidence. It aids in disaster recovery and relief. Building inspections and other surveys in areas not easily accessible can be more accurate. 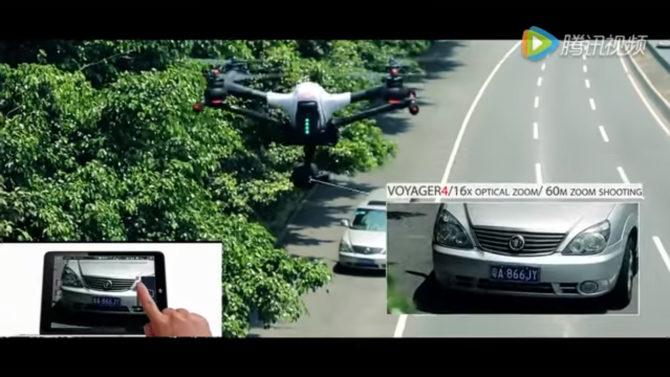 But this thing seems insane. How insane? Well, DJI’s Zenmuse Z3 offers the equivalent field of view of a 22-77mm lens on a full frame DSLR. The camera in the Voyager 4 is the equivalent of a 10-1500mm lens. Yes, really. I told you it was insane!

So, the first question I have is how steady does it actually hold this thing at maximum zoom? DJI admit the Zenmuse Z3 has extra hardware to help ensure stability. This is at a mere 77mm and they still only recommend it for stills.

I’m not convinced the examples shown in the video above are legit. They’re almost too perfect. The shot does move around the frame, following the movement of the drone.

It’s almost as if they’re trying to mask the fact it was shot on a static camera. When you look at the tablet screen, you can see the image is definitely not moving like the drone.

The Voyager 4 operates its own Wi-Fi network, giving a range of up to about 1.5km (0.9 miles). It also utilises 4G wireless Internet for both the drone and controller.

This means it could potentially be flown from anywhere in the world. Distance is no longer a factor, except for those FAA regulations. Specifically, the whole thing about the drone being in visual line of sight of the operator. Having a 4G signal in areas where there may be Wi-Fi interference can be handy, though.

The Voyager 4 doesn’t come with the superzoom as standard. By default it comes with a fixed wide lens 4K camera, as many drones do these days. The 16x zoom is an optional extra, and is only capable of shooting 1080p.

I’ve seen no confirmation of it anywhere, but I would guess that it is still using a 4K sensor, and simply cropping to assist the “zoom”. This is also the way the DJI Zenmuse Z3 works. This effectively doubles the optical zoom using what they call “Lossless digital zoom”.

Cropping a 4K sensor down to 1080p would also help with stabilisation, too. Cropping the picture to stabilise and saving at a lower resolution is a common technique with action cameras, too. It’s what stops them having blank areas around the edges when they stabilise.

No pricing for the Voyager 4 has been announced yet, nor has a release date. The Voyager 3 sits around $2,000, so we can probably expect its successor to be close to that once launched.

Can 1500mm equivalent really be stabilised that easily in the air, even with such a small camera? Or is it just a fantasy and it’ll not live up to the hype? Let us know what you think in the comments.