I have said it many times before. A slider is probably the first gadget you want to get if you are going into videography. It is one of the fastest ways to add production value to a movie. 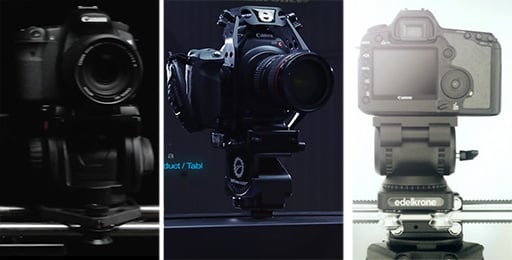 It is also great for doing motion timelapse and almost all the time lapse movies we feature on the blog have some sort of sliding motion. And while getting a set of wheels on a rail may seem trivial, there has been a lot of innovation with this over the last year. It seems that even a triviality like a slider has ample space for innovation.

Slider Plus from Edelkrone

Slider Plus from Edelkrone is by far the most innovative slider I have seen this year. Mostly because it achieves the seemingly impossible mission of traveling twice its length – Either a 1 foot slider that travels two feet or a 1.5 foot sliders that travels 3 feet.

The One Man Crew from Redrock Micro is one of those things that you hit your head when you see it and say, how come no one made something like this before. It is very simple but in the same time really innovative.

The slider is designed for interviews, but instead of having a person operate it, it slowly moves from side to side (and back again). The arc is parabolic, so if positioned correctly, the subject stays in one place in the frame and in focus during the movement.

If the previous two sliders were about new features, this one is about bringing quality sliding to the masses. There are plenty of sliders out there, quality sliders are hard to get by for an affordable price. The Rhino sliders does just that – it is a 48″ slider with 6 horizontal aligned ball-bearing wheels that pinch the tracks from both sides to provide super smooth motion. The side pinching systems means that it can easily go diagonal or even vertical. The lightest configuration is only 3 pounds heavy. How’s that for a 48″ slider? (It is also probably the only slider to visit space too).

One thing on common to all three of those sliders, they are more about innovation than about price. This is how we like it.

How To Convert A Time-lapse Intervalometer To A Slider Controller

How To Build A Travel Slider That Slides Twice Its Size